Free For All Fridays on WNZF: Host David Ayres welcomes Palm Coast Mayor David Alfin and City Manager Denise Bevan, with a legislative update, starting shortly after 9 a.m. with my commentary on WNZF.

Where Languages are Dying: From Statista’s Daily Infographics: “As UNESCO prepares to celebrate International Mother Language Day 2022 on February 21, data from the Endangered Languages Project analyzed by Statista reveals that thousands of languages from around the world are currently in danger of dying out. The role of languages in the DNA of cultures and the importance they hold as frameworks upon which our societies develop, cannot be understated. […] Globalization is a significant killer of languages, as a 2014 research paper by Amano et al. states.” 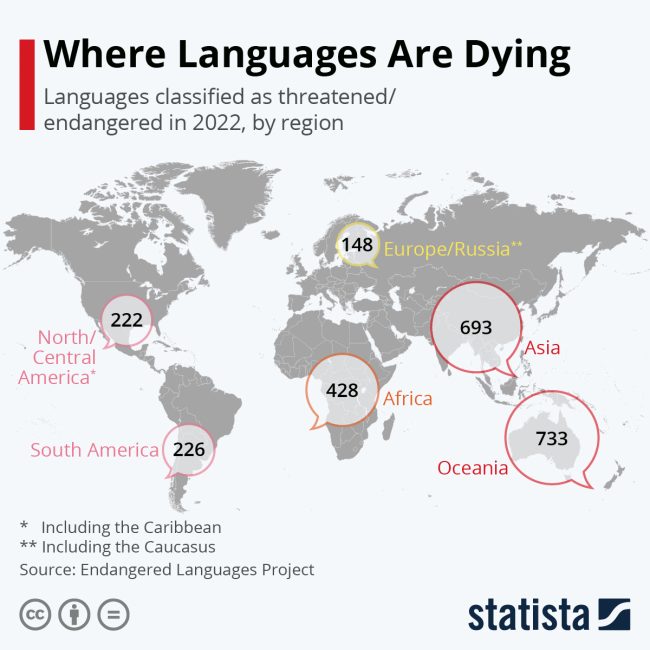 One of my favorite Bach cantatas, BWV 32, not so much for the valentine (“Dearest Jesus, my desire”) but for the music, the violin, the dialogue between bass and soprano, and that violin in the second aria (“Here, in My Father’s place”), which you can go to directly here. This is the Netherlands Bach Society, not necessarily the best recording out there but the Society’s videos are a gem for their attempt to give us all of Bach. Here’s the second aria’s brief, moving text. Note the violin’s tone when the bass sings of his distressed spirit. The text and translations are thanks to the Bach Cantatas Website:

“No, it is not by dangerous convulsions, it is not by struggles, regicides, and useless crimes that the wounds of the nations will be healed… It is by correcting opinion, combating prejudice, by acquainting princes and peoples with the value of justice, that reason can promise to cure the ills of the human race, and to establish firmly the reign of liberty.”