“But one cannot enter into human history once it has taken place; nor can a man of the nineteenth century really recover the mentality of the sixteenth. One cannot reproduce the whole history and yet keep to the forms and proportions of art. One cannot care so much about what has happened in the past and not care what is happening in one’s own time. One cannot care about what is happening in one’s own time without wanting to do something about it.”

The Palm Coast Code Enforcement Board meets at 10 a.m. at City Hall’s Intracoastal Meeting Room, 160 Lake Avenue. The meeting is open to the public.

Walks with Palm Coast Mayor Holland and Guest: Are you participating in the Mayor’s 90/90 Challenge? Mayor Holland is getting active with weekly activities! A beautiful walk along Waterfront Park is a great way to get those miles in. Register at www.parksandrec.fun/events. More info: 386-986-2323. More info on the Mayor’s 90/90 Challenge in the Palm Coast Connect app, www.palmcoastconnect.com, or 386-986-2323.

Through Saturday: Clare Boothe Luce’s “The Women”  is presented by the Flagler College Department of Visual and Performing Arts, Wednesday, Thursday, Friday and Saturday at 7:30 p.m. and Sunday at 2 p.m., Lewis Auditorium, 14 Granada Street, St. Augustine. The play by Clare Boothe Luce is set in the 1930s and tells the story of Mary Haines, a New York City socialite, who discovers her husband is having an affair. Presented by special arrangement with Dramatists Play Service. Tickets: $15 general admission and $5 for students. 904-826-8600.www.tickets.flagler.edu

‘BEST AND BRIGHTEST’ REPEAL CONSIDERED: The Senate will consider a series of issues during a floor session, including a proposal (SB 486), filed by Sen. Rob Bradley, R-Fleming Island, that would eliminate the controversial “Best and Brightest” teacher-bonus program. The proposal comes as the House and Senate consider plans for increasing teacher salaries. Among other issues, the Senate could approve a bill (SB 28), filed by Minority Leader Audrey Gibson, D-Jacksonville, that would provide $2.15 million to compensate Clifford Williams, who was wrongfully incarcerated for 43 years. (Tuesday, 10 a.m., Senate chamber, the Capitol.)

HOUSE HOLDS FLOOR SESSION: The House will take up numerous issues during a floor session, including a measure aimed at making it harder to put proposed constitutional amendments on the ballot. The proposal (HJR 7093), sponsored by Rep. Bob Rommel, R-Naples, would dramatically increase petition-signature requirements for ballot initiatives. Currently, backers of ballot initiatives must meet two petition-signature requirements to take proposed constitutional amendments to voters. Both requirements are based on a calculation of 8 percent of the number of votes cast in the last presidential election year. One of the requirements involves submitting an overall number of petition signatures that equal 8 percent of the votes cast statewide. For proposed constitutional amendments on the 2018 and 2020 ballots, that equated to submitting 766,200 petition signatures statewide, based on the number of votes cast in the 2016 election. The other requirement says backers of ballot initiatives must submit petitions signatures that equal 8 percent of the votes cast in at least half of Florida’s congressional districts — in effect forcing political committees to get signatures from various parts of the state. In 2018 and 2020, that meant hitting the target numbers in 14 of 27 congressional districts. Rommel’s proposal would make it harder to meet that second requirement. It would mandate backers of proposed constitutional amendments meet the targets in all congressional districts — up from half. (Tuesday, 11:30 a.m., House chamber, the Capitol.)

SCHOOL VOUCHERS AT ISSUE: The Senate Appropriations Committee will take up numerous bills, including a proposal (SB 1220), filed by Sen. Manny Diaz Jr., R-Hialeah, that addresses a series of education issues. Those issues include expanding the number of children who would be eligible for private-school vouchers through the Family Empowerment Scholarship program. (Tuesday, 1 p.m., 412 Knott Building, the Capitol.)

FPL SOLAR PLAN DEBATED: The state Public Service Commission will decide whether to approve a controversial $1.8 billion proposal that would lead to Florida Power & Light adding 20 solar-power plants over two years. Under the proposed SolarTogether program, customers would be able to voluntarily pay more on their electric bills to finance the projects and would receive credits that would result in them getting a “payback” in about seven years. FPL contends that the program would respond to customers who want to help boost renewable energy and might not want to have rooftop solar panels. But opponents, including the state Office of Public Counsel, argue the program would unfairly have costs and financial risks for the vast majority of customers who would not participate. (Tuesday, 9:30 a.m., Betty Easley Conference Center, 4075 Esplanade Way, Tallahassee.)

Are U.S. Presidents Getting Older? “With four front-runners over the age of 70, one heart attack suffered by candidate Bernie Sanders on the campaign trail and basically everyone younger than 70 having dropped out of the race, the presidential primaries for 2020 have been putting presidents’ ages on the agenda. President Trump, who is running for re-election, is himself the oldest president ever to be inaugurated (he was 70 at the time), and all four democratic frontrunners (Warren, Biden, Sanders, Bloomberg) would break that record still.” 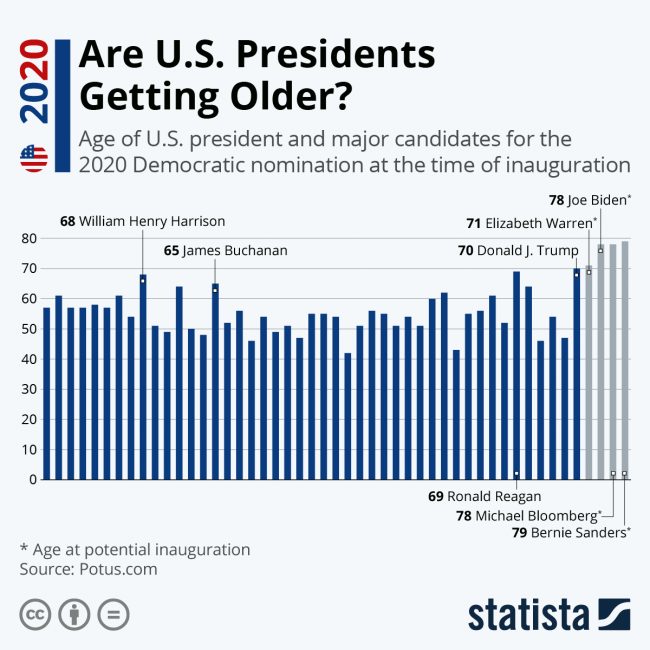