“The American presidency transcends the individuals who occupy the Oval Office. Their personality becomes part of our national character. Their actions become our actions, for which we all share responsibility. Their willingness to act in accordance with the law and our tradition dictate how current and future leaders will act. Their commitment to order, civility and decency are reflected in American society. Mr. Trump fails to meet the bar for this commitment. He has neither the moral compass nor the temperament to serve. His vision is limited to what immediately faces him — the problems and risks he chronically brings upon himself and for which others, from countless contractors and companies to the American people, ultimately bear the heaviest burden. But this president’s actions are possible only with the craven acquiescence of congressional Republicans. They have done no less than abdicate their Article I responsibilities.”

–From “We Are Republicans, and We Want Trump Defeated,” by George T. Conway III, Steve Schmidt, John Weaver and Rick Wilson, The New York Times, Dec. 17, 2019.

In Court: Dorothy Singer, the woman accused of murdering her husband in West Flagler in 2017, who was convicted by a jury and is serving a life sentence in state prison, is back in court for a pre-trial after an appeals court overturned her conviction in part, requiring a re-trial, before Circuit Judge Terence Perkins in Courtroom 401 at the Flagler County courthouse, 8:30 a.m.

Trump impeachment schedule: Donald Trump could become only the third U.S. president ever impeached, after Andrew Johnson and Bill Clinton, when the majority-Democratic House of Representatives votes on two articles of impeachment late this afternoon. He is expected to be acquitted at trial by a majority-Republican Senate. The Times sums up today’s schedule this way: “In the morning, the House is expected to vote to affirm the rules that the committee hashed out on Tuesday. This will be the first procedural vote by the full chamber to formally impeach Mr. Trump. After that, expect a lot of parliamentary moves by the Republicans to register their opposition and slow the process. The votes we’re all waiting for — on the two articles of impeachment — are expected in the late afternoon, most likely between 4 and 6 p.m.The House will hold a vote on each of the two articles.”

Ex-Congressman John Mica is the Flagler Tiger Bay Club’s Decemberluncheon speaker at Hammock Dunes Club, 30 Avenue Royale, Palm Coast, at 11:30 a.m. Reservations are required. President’s guest and non-members, $40. Mica served in the United States House of Representatives from 1992 – 2016, representing Florida’s 7th Congressional District. During his service as a fiscal conservative, Congressman Mica chaired several committees, championing initiatives to cut wasteful spending and duplicative programs while protecting the taxpayer dollar. Congressman Mica’s leadership placed a priority on the development of the nation’s counter-narcotics policy, and he was instrumental in authoring landmark legislation for veteran’s preferences and the expansion of healthcare access for military dependents. Known to many Floridians for his work as the Chairman of the House Transportation and Infrastructure Committee overseeing development of federal policy and projects related to aviation, maritime, highways and bridges, railroads and more, Congressman Mica will share his insights during the Flagler Tiger Bay Club’s December meeting, with a question and answer session to follow for members.

The Palm Coast Planning and Land Development Board was to meet at 5:30 p.m. at City Hall, City Hall, 160 Lake Avenue. This meeting has been cancelled. The planning board is responsible for recommending land development regulations to the city council. See the agendas here.

The Bunnell City Commission meets at City Hall at 7 p.m., Commission Chamber, City Hall Building 3, 201 West Moody Boulevard. This meeting would have normally been held on Monday, Dec. 23. Because of the holidays, it’s being moved up to tonight. The commission will consider approving an $11,670 tax break over seven years for a company called Premier Food Trucks, which would build a 10,000 square foot building in the city, in the Palm Industrial Park, and create 14 jobs. The commission will consider a $3,500 contract to redesign its website. It will consider reorganizing the city’s police department to create a sergeant’s position and promote from within.

The Long Road to Gender Equality: Based on current trends, the global gender gap will not be closed for another 99.5 years. When looking at particular aspects of the gap, the biggest factor in the current disparity becomes clear. According to the World Economic Forum (WEF) it will take 257 years to close the economic gender gap – a disparity which is actually increasing due to: “Lack of progress in closing the Economic Participation and Opportunity gap”. On the more positive side, at the current rate, the educational gap looks set to be almost completely diminished within 12 years. 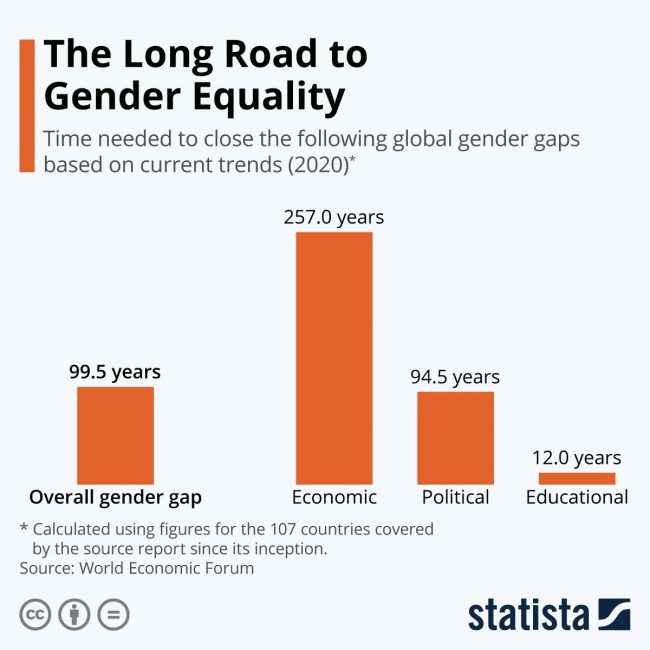 BOARD OF ED HOLDS CALL: The State Board of Education will hold a conference call to discuss an amended budget request for fiscal year 2020-2021. The amended request will reflect Gov. Ron DeSantis’ budget proposal. Immediately following will be a meeting about Florida Virtual School. (Thursday, 10:30 a.m. Call-in number: 1-800-353-6461. Code: 9132047.)