Weekend: Friday and Saturday: Partly cloudy with a 20 percent chance of showers and thunderstorms. Highs around 90. East winds 5 to 10 mph. Sunday: Showers and slight chance of thunderstorms. Highs around 90. Chance of rain 90 percent. Nights partly cloudy, with temperatures in the 70s.
Today’s document from the National Archives and the Astronomy Picture of the Day.
Today’s tides: at the beaches, at the Intracoastal Waterway.
Drought Index: 223
Merriam-Webster’s Word of the Day: chivy.
The Live Community Calendar
Today’s jail bookings.

“Andrew Johnson… was to be our Moses to lead us to liberty and equality; instead of which I fear he will be the Pharaoh of our day.”

Free For All Fridays on WNZF: Host David Ayres welcomes the Flagler Health Department’s Bob Snyder to talk about vaccines and discuss the school board’s resistance to allowing the HPV vaccine to be offered voluntarily in the schools. School Board Chairman Janet McDonald is tentatively booked for the show as well. Also appearing is Elections Supervisor Kaiti Lenhart, all starting a little after 9 a.m. with a commentary by FlaglerLive Editor Pierre Tristam on the school board’s wrong-headed approach on vaccines.

Friday: The Scenic A1A PRIDE Committee meets at 9 a.m. at the Hammock Community Center, 79 Mala Compra Rd. off A1A in the Hammock. The committee is expected to get a presentation on a revised site plan for the controversial Hammock Harbor development. See “‘Hammock Harbor’ Redevelopment Proposing Shops and Boat Storage off A1A Riles New Opposition.”

Friday and Sunday: Three farmers’ markets operate over the weekend in Flagler County. The Flagler Beach farmers’ market is on Friday from 8 a.m. to early afternoon, downtown at 111 South Central Ave. Contact the market by email here. The European Village Farmers’ Market at 101 Palm Harbor Parkway is Sundays from noon to 4 p.m., featuring music jams as well. The Salt Air Farmers’ Market is on Sundays at Marinelad’s Dolphin Adventure, 9505 Oceanshore Boulevard, Marineland.

Friday: “Rick Shaefer: The Refugee Trilogy” Exhibit, with an opening, free reception from 6-8 p.m. at Stetson University’s Homer and Dolly Hand Art Center, 139 E Michigan Ave, DeLand. In 2018, the number of people who had been forcibly coerced to leave their home and country as a result of persecution, violence or human rights violations worldwide reached 70.8 mil 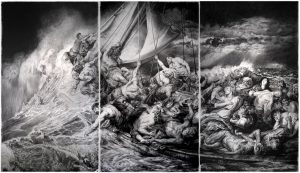 lion, according to the United Nations High Commissioner for Refugees (UNHCR). The number of people displaced increased by 2.3 million people from the previous year, a record high. Artist Rick Shaefer’s reaction to the international refugee crisis is featured in his large-scale, charcoal triptych drawings that portray people of ancient times fleeing by land or water and experiencing the conflicts at borders in three thematic, panel scenes. Stetson University’s Homer and Dolly Hand Art Center will display 20 of Shaefer’s charcoal-and-pencil drawings in “Rick Shaefer: The Refugee Trilogy” exhibit, Aug. 16-Oct. 14, with an opening-night reception on Aug. 23.Exhibits at the Hand Art Center are free and open to the public.

a child or children with autism or related disability and would like them to participate in the event surfing activities, you may submit a Surfer Participation Request (SPR) here. To ensure everyone’s safety and allow each participant ample time surfing, Surfing Festivals are capped at 200 participants. Participants for each Surfing Festival are selected according to their priority choice and where needed, by random selection. Founded in 2008 by a handful of South Florida surfers who realized the impact of surfing’s healing magic on children diagnosed on the autism spectrum. Since that first event, held at Deerfield Beach, Fla., SFA has reached countless participants, families, volunteers, communities, and supporters. With the combined effort, support, understanding, and inspiration of those involved, the magic that comes from loving encouragement and soothing surf is created.

Download your 2019 Hurricane Preparedness Guide here, or see below:

IMPORTANT: Safety in the Work Zone: Drivers are reminded to obey all posted speed limits, and to be alert to vehicles turning onto northbound S.R. A1A from side streets or businesses. Pedestrians and bicyclists are asked to remain aware as construction activities continue and designated pathways are moved. Please use extra caution walking, bicycling or driving through the area. Remember, safety is everyone’s responsibility.

The contractor expects to finish installation of the French drain within the next three weeks. The contractor is forming and pouring the concrete curbing for the median, and building the new southbound roadway.

Residents can expect to see increased truck traffic as the contractor brings in base materials for the roadway and concrete trucks for the curbing. The curbing is constructed in two phases. The foundation is poured first, followed by the vertical face of the curb. This type of curb will add extra stability for the roadway.

Wall construction is complete. Remaining work includes placing sand over the wall and planting new vegetation. The contractor also is excavating a small swale along the east side of the roadway.

PRIMARY ELECTIONS PROPOSAL EYED: The Financial Impact Estimating Conference will discuss potential financial impacts of a proposed constitutional amendment that would revamp state primary elections. The political committee All Voters Vote is seeking to put the proposal on the November 2020 ballot.  Under the proposal, all registered voters would be able to cast ballots in primaries, regardless of political affiliation. The two candidates getting the most votes in each primary would advance to the general election. (Friday, 1:30 p.m., 117 Knott Building, the Capitol.)

Here’s a summary of the latest city developments as of Aug. 16, 2019, with a link to the full week in review here.