Today: Cloudy. Patchy fog in the morning. A 50 percent chance of showers in the afternoon. Highs in the lower 80s. Southwest winds 10 to 15 mph. Tonight: Cooler. Cloudy with chance of showers and slight chance of thunderstorms. Lows in the upper 40s. Southwest winds 5 to 10 mph shifting to the northwest after midnight. Chance of rain 50 percent. See the latest National Weather Service-Jacksonville Briefing here.
Today’s document from the National Archives and the Astronomy Picture of the Day.
Today’s National Commemorations.
Today’s tides: at the beaches, at the Intracoastal Waterway.
Drought Index: 182
Global Warming: The daily carbon count.
A.Word.A.Day from Wordsmith.org. Today’s word: homily.
The Live Community Calendar
Today’s jail bookings.

“Jefferson aimed not simply to reorder a government but also to change the society supporting it. Thus in the constitutions he drafted he recommended that fifty acres of land be allocated to all males who owned none, that the trade in slaves be prohibited, that the death penalty be abolished except in cases of murder, and that “all persons shall have full and free liberty of religious opinion: nor shall any be compelled to frequent or maintain any religious institution.” None of these ideas made their way into the Virginia constitution.”

–From Robert Middlekauff’s “The Glorious Cause: The American Revolution, 1763-1789.”

In Court: 50-year-old Daytona Beach resident Elijah Jackson is on trial on charges of using a computer to lure a child and transmission of materials harmful to minors: he is accused of sending a picture or video of his penis to a 15-year-old girl (his cousin). The trial began Monday with jury selection. It is expected to conclude today before Circuit Judge Terence Perkins in Courtroom 401 at the Flagler County courthouse, starting at 9 a.m.

The Palm Coast City Council was to meet at 9 a.m. at City Hall in Town Center, but the meeting was cancelled early Tuesday morning for lack of quorum. The council was to  hear a presentation on the 2020 Census. Staff and a representative from Flagler Palm Coast High School was to present an update of the Flagler Palm Coast Visual Project. Ten people have applied to replace Pete Lenhertz on the city’s planning board: David Alfin, Kenneth Carruth, Bernie Kershner, Charles Lemon (currently an alternate on the board), Perry Mitrano, Morris Montgomery, Suzanne Nicholson, Bonnie Pennington, Jameson Risley and Cathy Wood. The council will choose among the applicants. See the full agenda and background materials here.

The Flagler County School Board meets in workshop at 1 p.m. Training Room 3, 3rd floor, Government Services Building, 1769 E Moody Blvd., Bunnell. The meeting is an information workshop only. Board members will discuss their search for a new superintendent, along with discussions of various capital projects.

The Flagler County School Board meets at 6 p.m. in board chambers at the Government Services Building, 1769 E Moody Blvd., Bunnell. The school board’s full agenda is accessible here.

Indivisible-Flagler Nobody Is Above the Law Rally: on the night before the U.S. House of Representatives votes to impeach President Donald Trump, Flagler County community members gather at 4:30 p.m. at the intersection of US Route 100 and Seminole Woods Blvd/Town Center Blvd (near Panera & Hilton Gardens) in one of hundreds of nationwide “Nobody Is Above the Law” rallies. The mobilization is part of a massive, grassroots effort to ensure Congress holds Donald Trump accountable for using military aid to pressure Ukraine to interfere in our 2020 elections. The Palm Coast gathering will be a solemn one with a focus on defending our democracy. Those attending will hold flags, lights and signs, emphasizing the seriousness of the charges against Trump — and the threat his behavior poses to the rule of law, our constitution and way of life in the USA.

In 2100, Five of the Ten Biggest Countries in the World Will Be in Africa: “While in 2020, five out of the ten most populous countries in the world were located in Asia, the picture will look different in 2100, when five African countries – Nigeria, Ethiopia, Tanzania, Egypt and the Democratic Republic of the Congo – will be among the world’s ten largest. While some Asian countries will continue to grow, they will do so at a lower rate and will be surpassed in population by African countries exhibiting faster growth. Others, like China and Bangladesh are actually expected to shrink until 2100, mainly a result of higher standard of living and education that has already begun to lower birth rates.” 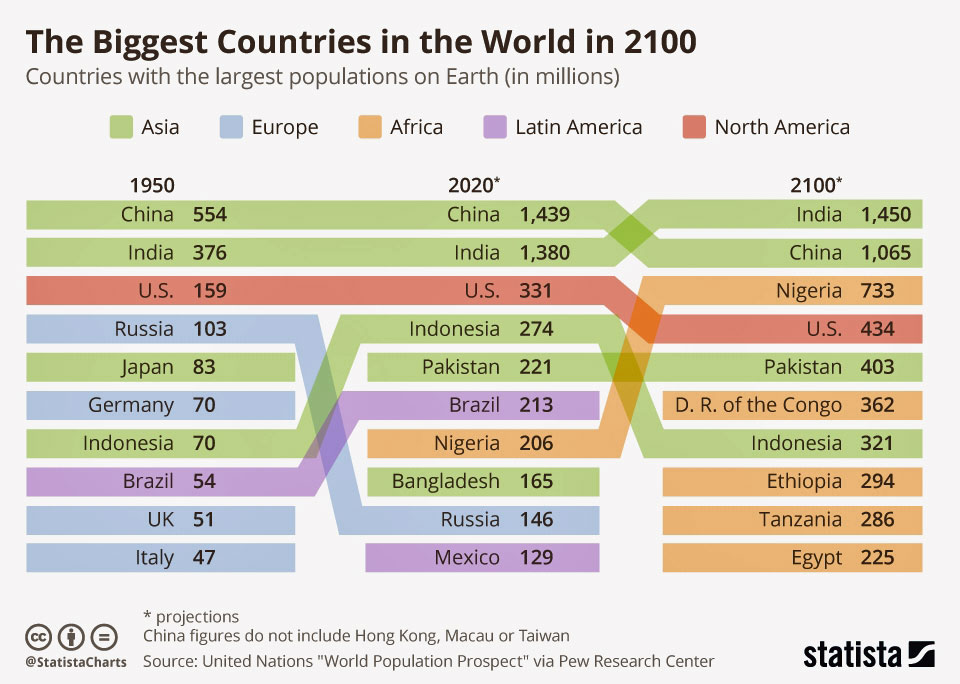