“With the world began a war which will end only with the world: the war of man against nature, of spirit against matter, of liberty against fatality. History is nothing other than the record of this interminable struggle.”

In Court: The case of Thomas LeGault, a candidate for Flagler County Commission, is scheduled for pre-trial before County Judge Andrea Totten at 9 a.m.in Courtroom 404 at the Flagler County courthouse. Flagler Broadcastin’s WNZF sued LeGault over a claim of just under $5,000 resulting from unpaid bills for an infomercial LeGault hosted on the radio station from February to May 2019. But court records indicate that LeGault had not been found in order to be served. See: “WNZF Sues County Commission Candidate Tommy LeGault Over Unpaid Bills; He Owes FPC’s Cheerleaders Money They Raised Months Ago.”

The Flagler County School Board meets for an agenda workshop at 3 p.m. Training Room 3, 3rd floor, Government Services Building, 1769 E Moody Blvd., Bunnell. The meeting is an information workshop only. The board will discuss, among other items, a proposed suicide-prevention policy. The agenda workshop focuses on items the board will take action on at its next regular meeting.

The Palm Coast City Council meets at 6 p.m. at City Hall in Town Center. Mayor Milissa Holland and others may address the city’s arrangement with Coastal Cloud that gave rise to Palm Coast Connect under a previous administration. The issue drew attention following a critical column in the Observer by Cindi Lane, a former city staffer, and further comments on Friday on WNZF, by City Council member Jack Howell. The council is expected to vote on a 120-day moratorium on development applications for dollar stores. The full agenda and background materials are here.

A Suicide Prevention Rally is scheduled for 4:30 p.m. at Old Kings Road and Palm Coast Parkway. The rally is organized by county mental health advocates.

Chess on the Porch (and backgammon): The Humidor at European Village hosts an open chess evening starting at 6 p.m. Anyone and everyone welcome. Bring your chessboard if you have one. Great beer and wine, plus cigars. 101 Palm Harbor Pkwy, Palm Coast. Call 386.445.2221.

The Flagler Sportsfishing Club holds its monthly meeting, starting with a Quick Tips speaker at 7 p.m. and a guest speaker at 7:30, at the VFW, 47 Old Kings Rd N, Palm Coast. The club focuses on educating members on local fishing techniques, laws and regulations. Non-members are always welcome as well. Click here to become a member. Membership is $70 a year for an individual.

‘BEST AND BRIGHTEST’ REPEAL CONSIDERED: The Senate will consider a series of issues during a floor session, including a proposal (SB 486), filed by Sen. Rob Bradley, R-Fleming Island, that would eliminate the controversial “Best and Brightest” teacher-bonus program. The proposal comes as the House and Senate consider plans for increasing teacher salaries. Among other issues, the Senate could approve a bill (SB 28), filed by Minority Leader Audrey Gibson, D-Jacksonville, that would provide $2.15 million to compensate Clifford Williams, who was wrongfully incarcerated for 43 years. (Tuesday, 10 a.m., Senate chamber, the Capitol.)

HOUSE HOLDS FLOOR SESSION: The House will take up numerous issues during a floor session, including a measure aimed at making it harder to put proposed constitutional amendments on the ballot. The proposal (HJR 7093), sponsored by Rep. Bob Rommel, R-Naples, would dramatically increase petition-signature requirements for ballot initiatives. Currently, backers of ballot initiatives must meet two petition-signature requirements to take proposed constitutional amendments to voters. Both requirements are based on a calculation of 8 percent of the number of votes cast in the last presidential election year. One of the requirements involves submitting an overall number of petition signatures that equal 8 percent of the votes cast statewide. For proposed constitutional amendments on the 2018 and 2020 ballots, that equated to submitting 766,200 petition signatures statewide, based on the number of votes cast in the 2016 election. The other requirement says backers of ballot initiatives must submit petitions signatures that equal 8 percent of the votes cast in at least half of Florida’s congressional districts — in effect forcing political committees to get signatures from various parts of the state. In 2018 and 2020, that meant hitting the target numbers in 14 of 27 congressional districts. Rommel’s proposal would make it harder to meet that second requirement. It would mandate backers of proposed constitutional amendments meet the targets in all congressional districts — up from half. (Tuesday, 11:30 a.m., House chamber, the Capitol.)

SCHOOL VOUCHERS AT ISSUE: The Senate Appropriations Committee will take up numerous bills, including a proposal (SB 1220), filed by Sen. Manny Diaz Jr., R-Hialeah, that addresses a series of education issues. Those issues include expanding the number of children who would be eligible for private-school vouchers through the Family Empowerment Scholarship program. (Tuesday, 1 p.m., 412 Knott Building, the Capitol.)

FPL SOLAR PLAN DEBATED: The state Public Service Commission will decide whether to approve a controversial $1.8 billion proposal that would lead to Florida Power & Light adding 20 solar-power plants over two years. Under the proposed SolarTogether program, customers would be able to voluntarily pay more on their electric bills to finance the projects and would receive credits that would result in them getting a “payback” in about seven years. FPL contends that the program would respond to customers who want to help boost renewable energy and might not want to have rooftop solar panels. But opponents, including the state Office of Public Counsel, argue the program would unfairly have costs and financial risks for the vast majority of customers who would not participate. (Tuesday, 9:30 a.m., Betty Easley Conference Center, 4075 Esplanade Way, Tallahassee.)

Super Tuesday: Where Do the States Stand? The most important states to win on Super Tuesday are all polling in favor of Sen. Bernie Sanders (I-VT), averages from Real Clear Politics show. Both in California, where 415 delegates are up for grabs, and Texas, which has 228 delegates on offer, the Vermont senator enjoys a comfortable margin ahead of competitor for the Democratic nomination in the 2020 presidential election, Joe Biden. 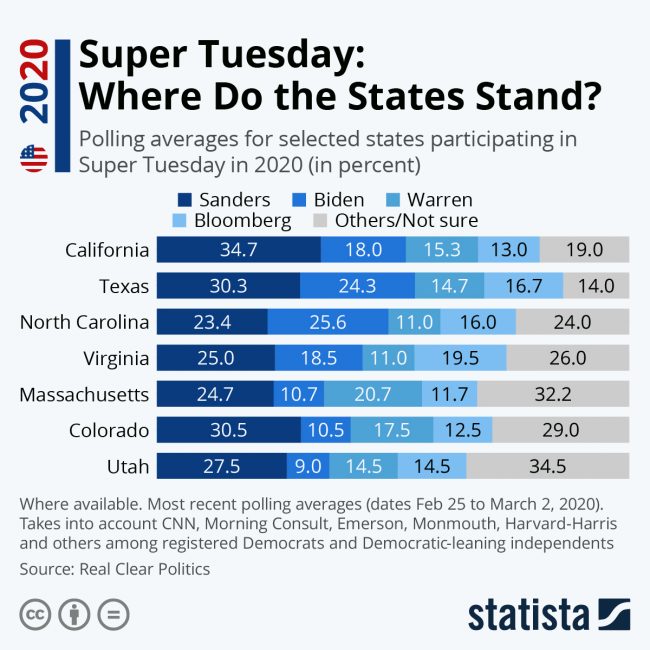