Today: Warmer. Mostly cloudy in the morning then becoming partly cloudy. Patchy fog in the morning. Highs in the mid 80s. Southeast winds 5 to 10 mph. Tonight: Partly cloudy with a 20 percent chance of showers in the evening, then mostly cloudy after midnight. Lows in the lower 60s. South winds 5 to 10 mph. See the latest National Weather Service-Jacksonville Briefing here.
Today’s document from the National Archives and the Astronomy Picture of the Day.
Today’s National Commemorations.
Today’s tides: at the beaches, at the Intracoastal Waterway.
Drought Index: 224
Global Warming: The daily carbon count.
A.Word.A.Day from Wordsmith.org. Today’s word: faff.
The Live Community Calendar
Today’s jail bookings.

–From Erika Lee’s “America for Americans: A History of Xenophobia in the United States” (2019).

Today is Presidents’ Day: Flagler County schools are closed, but most government offices and courts are open.

In Court: Tonda Royal, 53, who is accused of unlawful sex with a 16-year-old girl in Bunnell in 2018. Jury selection was Monday. Opening arguments are this morning before Circuit Judge Terence Perkins at 9 a.m. in Courtroom 401 at the Flagler County courthouse.

The Palm Coast City Council meets at 9 a.m. at City Hall in Town Center. The council is expected to approve on second reading an ordinance regulating trespassing procedures on public property.

The Bunnell Planning, Zoning and Appeals Board meets at 6 p.m. in City Commission Chambers, Building 3, 201 West Moody Boulevard, Bunnell. This meeting has been cancelled.

The Flagler County School Board meets at 6 p.m. in board chambers at the Government Services Building, 1769 E Moody Blvd., Bunnell. The school board’s full agenda is accessible here.

Candidate forum: The Flagler Woman’s Club hosts a candidate forum ahead of the Flagler Beach municipal election, from 7 to 9 p.m. at the club’s headquarters, 1524 S. Central Ave, Flagler Beach. Margaret Sheehan-Jones will moderate. The candidates are Ken Bryan, a board member with Preserve Flagler Beach and a former county commissioner in St. Johns, Paul Harrington and Deborah Phillips, who have both run for the city commission before, and incumbent Marshall Shupe (incumbent). Two seats are up for citywide election, so the top two vote-getters will be seated. Six minutes will be provided each candidate to present themselves, and written questions from the audience will be taken.

E-VERIFY REQUIREMENT DEBATED: The Senate Commerce and Tourism Committee will take up a bill (SB 664), filed by Sen. Tom Lee, R-Thonotosassa, that would require employers to do immigration checks on all new hires through E-Verify, a federal database run by the Department of Homeland Security. The current version of the bill would carve out from the requirement employers in the agriculture industry and some public contractors. (Tuesday, 10 a.m., 110 Senate Office Building, the Capitol.)

REGULATIONS SOUGHT IN ASSISTED REPRODUCTION: The Senate Criminal Justice Committee will consider a proposal (SB 698), filed by Sen. Lauren Book, D-Plantation, that would make changes dealing with sperm banks and fertility clinics. For example, it could open the door to civil lawsuits against physicians who “intentionally or recklessly” implant incorrect sperm, eggs or embryos in patients. (Tuesday, 10 a.m., 37 Senate Office Building, the Capitol.)

FLU AND STREP TESTS CONSIDERED: The Senate Health Policy Committee will take up a bill (SB 714), filed by Sen. Travis Hutson, R-St. Augustine, that would allow pharmacists to test and treat patients for influenza and streptococcus. (Tuesday, 10 a.m., 412 Knott Building, the Capitol.)

WRONGFUL INCARCERATION AT ISSUE: The House Appropriations Committee will take up a bill (HB 6507), filed by Rep. Kimberly Daniels, D-Jacksonville, that would provide $2.15 million to compensate Clifford Williams for being wrongfully incarcerated for 43 years in a Duval County murder and attempted-murder case. (Tuesday, 11:30 a.m., 212 Knott Building, the Capitol.)

SEXUAL BATTERY PROSECUTIONS AT ISSUE: The Senate Criminal and Civil Justice Appropriations Subcommittee will take up a bill (SB 170), filed by Sen. Linda Stewart, D-Orlando, that would eliminate a time limit for prosecuting sexual-battery cases in which children are the victims. (Tuesday, 1:30 p.m., 37 Senate Office Building, the Capitol.)

FELONS’ VOTING RIGHTS AT ISSUE: The Florida Rights Restoration Coalition will hold an advocacy day at the Capitol. The coalition helped lead efforts to pass a 2018 constitutional amendment aimed at restoring the voting rights of felons who have completed their sentences. (Tuesday, 2 p.m., the Capitol.)

The States Producing the Most CO2 Per Capita: “Louisiana, Alaska, West Virginia, North Dakota and Wyoming have per-capita emission ratios that are higher than those of any other state in the nation by at least 50 percent. In the case of Wyoming, per capita CO2 emissions exceed the national average five-fold.” 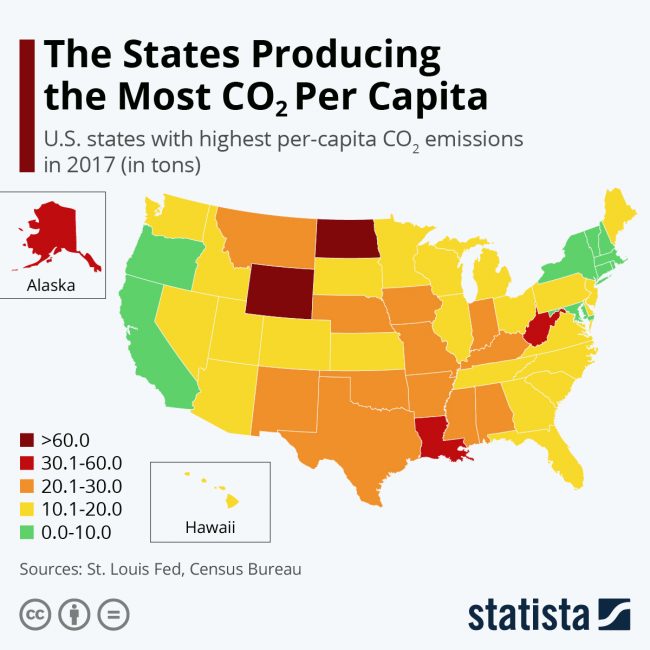