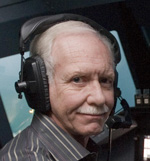 “In the interest of full disclosure, I attended a fundraiser last year for the Biden campaign, but this issue goes beyond politics. Regardless of how you feel about Joe Biden, or his chances of becoming the Democratic nominee for president; whether you are a Republican, a Democrat, or none of the above; whether you stuttered as a child or laughed at one who did; whether as a parent you try to protect your own stuttering child from taunts such as those made by the president’s daughter-in-law; these words come without hesitation: Stop. Grow up. Show some decency. People who can’t have no place in public life.”

The Palm Coast City Council meets at 9 a.m. at City Hall in Town Center. The council is expected to approve measures setting in motion its $20 million expansion of Wastewater Treatment Plant #2 at the northwest of the city. See “Palm Coast Prepares for $20 Million Sewer Plant Expansion in Anticipation of Growth.”

The Flagler County School Board meets in workshop at 1 p.m. Training Room 3, 3rd floor, Government Services Building, 1769 E Moody Blvd., Bunnell. The board will discuss matters of heatstrokes and student athletes. It will discuss revisions to the student sexual harassment policy, and the similar policy applying to employees. The meeting is an information workshop only. The school board’s full agenda is accessible here.

The Flagler County School Board meets at 6 p.m. in board chambers at the Government Services Building, 1769 E Moody Blvd., Bunnell. The board will discuss and advertise its new suicide prevention policy. The school board’s full agenda is accessible here.

The Bronx Wanderers, 7:30 p.m. Flagler Auditorium, 5500 East Hwy 100, Palm Coast, call 386-437-7547. With superlative vocals and musicianship, dynamic enthusiasm and a genuine love of the music they perform, The Bronx Wanderers recreate the magic of an era. They build an energetic bond with their audience, guaranteeing an evening of toe–tapping, hand–clapping and dancing in the aisles. Return to a time when the songs made your dreams soar and the beat of the music matched the rhythm of your heart. The Bronx Wanderers will take you on the Rock N’ Roll journey you once knew and will NEVER forget. The Great American songbook spanning the pop/rock classics of six decades comes alive every night. The show covers all musical bases and hits an out–of–the–park home run with audiences of all ages every night.” It’s the BEST evening of Rock N’ Roll you will ever experience. Tickets $34-$44.

Vacation Rentals: The House Workforce Development & Tourism Subcommittee will consider a bill (HB 1011), filed by Rep. Jason Fischer, R-Jacksonville, that would take away power from cities and counties to regulate vacation rental properties. The bill would “preempt” regulation of vacation rentals to the state. Supporters of such preemption point, at least in part, to the property rights of people who decide to use platforms such as Airbnb to rent out homes or parts of homes. But critics contend that such rentals, in many cases, have turned into commercial operations in residential areas. (Tuesday, 3 p.m., 12 House Office Building, the Capitol.)

HOUSE TAKES AIM AT SUNSCREEN BANS: The House Local, Federal and Veterans Affairs Committee will consider a proposal (HB 113), filed by Rep. Spencer Roach, R-North Fort Myers, that would block local governments from regulating over-the-counter drugs and cosmetics. The issue centers on a decision by Key West to ban certain types of sunscreen because of concerns that they could damage coral reefs. (Tuesday, 9 a.m., 12 House Office Building, the Capitol.)

ANIMAL CRUELTY TARGETED: The Senate Criminal Justice Committee will take up a bill (SB 1044), filed by Sen. Jason Pizzo, D-North Miami Beach, that would place requirements on veterinarians about reporting cases of suspected animal cruelty to law-enforcement or animal-control officials. The bill would apply to cases involving cruelty to cats and dogs. (Tuesday, 10 a.m., 37 Senate Office Building, the Capitol.)

‘TOBACCO 21’ MEASURE CONSIDERED: The Senate Health Policy Committee will consider a proposal (SB 810), filed by Sen. David Simmons, R-Altamonte Springs, that is known as the “Tobacco 21” bill. It would revamp regulations for tobacco and electronic-cigarette products, including increasing the minimum age to purchase products from 18 to 21. (Tuesday, 10 a.m., 412 Knott Building, the Capitol.)

BROADBAND EXPANSION BACKED: The House Energy & Utilities Subcommittee will consider a proposal (HB 969), filed by Rep. Brad Drake, R-Eucheeanna, that would create the Florida Office of Broadband to help with the expansion of broadband service in the state. (Tuesday, 10 a.m., 212 Knott Building, the Capitol.)

ATTORNEY FEES ON TABLE: The Senate Banking and Insurance Committee will take up a bill (SB 914), filed by Sen. Jeff Brandes, R-St. Petersburg, that would prevent judges from using what is known as a “contingency risk multiplier” to increase attorney fees in property-insurance lawsuits. (Tuesday, noon, 412 Knott Building, the Capitol.)

DCF CHANGES PROPOSED: The Senate Children, Families and Elder Affairs Committee will consider a proposal (SB 1326), filed by Sen. Wilton Simpson, R-Trilby, that would make a series of changes at the Department of Children and Families. Those changes would address issues such as child protective investigations and creation of an Office of Quality Assurance and Improvement. (Tuesday, noon, 301 Senate Office Building, the Capitol.)

SOVEREIGN IMMUNITY LIMITS EYED: The Senate Judiciary Committee will take up a bill (SB 1302), filed by Sen. Anitere Flores, R-Miami, that would increase the potential liability of government agencies in lawsuits. The state’s sovereign immunity laws limit the amounts government agencies can be forced to pay, and the bill would increase the limits. (Tuesday, noon, 110 Senate Office Building, the Capitol.)

RESLIENCY, SEA LEVEL RISE DISCUSSED: The House Agriculture & Natural Resources Subcommittee will consider a proposal (HB 1073), filed by Rep. Cyndi Stevenson, R-Saint Johns, that would create a Statewide Office of Resiliency in Gov. Ron DeSantis’ office as part of efforts to address the impacts of climate change. The proposal also calls for creating a Statewide Sea-Level Rise Task Force that would “recommend consensus projections of the anticipated sea-level rise and flooding impacts along this state’s coastline.” The task force would face a January 2021, deadline to submit the projections to the state Environmental Regulation Commission for consideration. (Tuesday, 12:30 p.m., 12 House Office Building, the Capitol.)

SCHOOL SAFETY ON AGENDA: The Senate Education Committee will take up a bill (SPB 7040) that would address concerns of a grand jury that found “systemic” school-safety failures in Florida. The bill would make several changes to training requirements in the controversial school “guardian” program, increase oversight for districts’ school security plans and make changes to the state’s emergency drill policies. For example, it would require sheriff’s offices to “review and approve” psychological evaluations, drug-test results and background checks of school employees before they can be trained to carry guns in schools as part of the guardian program. In a December report, the grand jury found some school employees completed the state-funded guardian training only to later be told they could not participate in the program “due to defects in their background, psychological evaluations, or due to the failure in some other aspect of the vetting” process. (Tuesday, 2:30 p.m., 412 Knott Building, the Capitol.)

Muslim Ban Slashes Immigration From Countries Affected “The U.S. travel ban including five Muslim majority countries has majorly reduced new U.S. residents from the places affected. New residents from Yemen were a lot fewer – their numbers were reduced by 87 percent in two years. While in FY 2016, almost 13,000 Yemenis took up residence in the United States, that number was slashed to 1,600 in FY 2018. The number of new residents from Iran was reduced by 44 percent in the same time frame.” 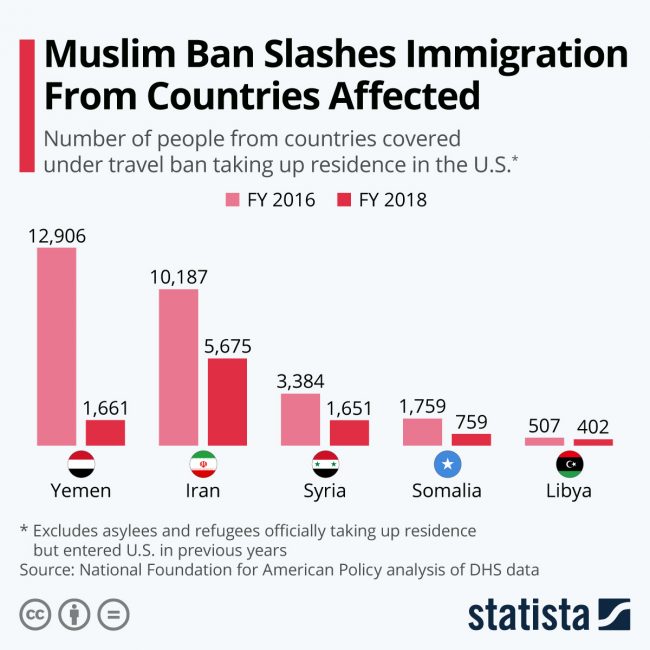