Today: Mostly cloudy in the morning then becoming partly cloudy. Chance of showers and slight chance of thunderstorms. Highs in the upper 80s. East winds 10 to 15 mph. Chance of rain 40 percent. Tonight: Partly cloudy. A 20 percent chance of showers and thunderstorms after midnight. Lows in the lower 70s. Northeast winds 5 to 10 mph. Details here.
Today’s document from the National Archives and the Astronomy Picture of the Day.
Today’s tides: at the beaches, at the Intracoastal Waterway.
Drought Index: 361
The OED’s Word of the Day: scrithel, adj..
The Live Community Calendar
Today’s jail bookings.

“Indifference is one of the seven deadly sins, actually the greatest of them all, because it is the only one that sins against life.”

–From Karl Ove Knausgaard’s “My Struggle: Book 2: A Man in Love.”

The Palm Coast City Council meets at 6 p.m. at City Hall in Town Center. The council is expected to discuss its nex manager’s search and its contract with interim manager Beau Falgout.

The Flagler County School Board holds a closed-door session at 11 a.m. in the Superintendent’s conference room on the third floor of the Government Services Building, to discuss security. The board meets in open workshop at 3 p.m. in Training Room 3 on the third floor of the GSB. The board will discuss the 2019-20 school calendar and its contract with its service workers’ union. It will also discuss the potential sale of a 20-acre parcel, currently valued at $335,000, on Ocean Shore Boulevard, just north of Jungle Hut Road in the Hammock, on the west side of A1A.

The Flagler Sportsfishing Club holds its monthly meeting starting with quick tips at 7 p.m., a general club meeting at 7:30 p.m. and a panel discussion at 8 p.m. at the VFW Club, 47 Old Kings Rd N Palm Coast. All are welcome. This month’s meeting will consist of an experienced Panel made up of Surf Fishing Club Members sharing their experiences of success.

Flagler Beach’s Planning and Architectural Review Board meets for an overview of the Comprehensive Plan and “new” Future Land Use Map at 5:30 p.m. at City Hall, 105 South 2nd Street. The Northeast Florida Regional Council has been actively engaged in updating the City’s Comprehensive Plan. This document defines the structure of growing the City through the year 2035. One significant component of the Comprehensive Plan is the Future Land Use Map (FLUM). The FLUM establishes the community’s standard to guide future planning and land use. For more information contact Larry Torino at [email protected] beach.com or (386) 517-2000 Ext. 230.

Through Oct. 6: If you know any homeowner that still has unmet housing needs from Hurricane Irma and would like to apply to for disaster recovery assistance, there will be a Mobile Intake Bus at the Flagler Beach Library, 315 S 7th St., through Saturday October 6, daily from 10 a.m. to 6 p.m. Inquiries may be directed to (844) 833-1010. Grant details here.

Palm Coast Road Closure through Oct. 15: The City of Palm Coast plans to temporarily close a section of Wellington Drive – from Village Circle (the Wellington/Village intersection farthest from Pine Lakes Parkway) to Lago Vista Place – beginning Monday, Oct. 1, and continuing through Oct. 15. This temporary road closure is necessitated by a City project to upgrade a utility pump station. This temporary road closure will be 24 hours a day during the project. Detours will be in place to help neighborhood residents and other motorists reach their destinations. For more information, call Customer Service at 386-986-2360.

Time to sign up for City of Palm Coast Starlight Holiday Parade: Palm Coast – Organizations and businesses that want to participate in the City of Palm Coast’s 2018 Starlight Holiday Parade in December should sign up now! The deadline for parade entries is Nov. 28. Participants may register online at www.palmcoastgov.com/starlightparade. Or print out the parade entry form and return it as directed on the form. The Starlight Holiday Parade will begin at 7 p.m. Saturday, Dec. 8, at Central Park in Town Center – featuring colorful lighted floats, talented marching bands, and prizes for the top entries. All participants are encouraged to add lighted holiday displays to their floats. The route will begin at the Round-About on Central Avenue (east of Market Avenue) and head east; turning north onto Park Street, east onto Lake Avenue, and south on City Place; then continuing south on Bulldog Drive. Parade entry is free. The judging categories will be: Best of Parade, Best Marching Unit, Best Float and Best Decorated Vehicle. Prior to the Starlight Holiday Parade, the City of Palm Coast’s Parks & Recreation Department will host a fun-filled afternoon at Central Park starting at 4 p.m. Visitors will enjoy live entertainment and performances; arrival of Santa and visits with Santa, food and beverages. Santa will visit with children until 6 p.m., and families will be able to take their own photos. For more information, contact Palm Coast Parks & Recreation at 386-986-2323. 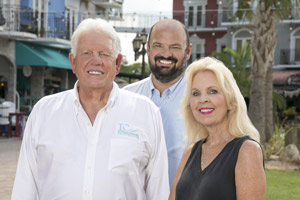 Robbie Richmond, Barb Kimberley, and Rod Kimberley have launched Intracoastal Construction: The company has bought and is remodeling an office space at 101 Palm Harbor Pkwy, Suite 116-B in the European Village. The unit was the former home to Coconut Island, a retail store that closed last month after the owners retired. Robbie Richmond has served over 400 clients in Flagler County during the past eighteen years. Robbie holds a residential license for homes up to three levels and a commercial general contractor’s license for custom multi level designs. Robbie is also certified as a Florida Green Builder. His peers have elected him twice to be the President of the Flagler County Builder’s Association. Prior to moving to Flagler County in 1996, Rod Kimberley ran the Washington, DC office of ITT for eight years and moved to Palm Coast to work as the company’s National Sales Manager. Palm Coast was conceived in 1969 when ITT Corporation bought several thousand acres of land in Flagler County to develop a massive Planned Unit Development (PUD) community. Barb is a former Flagler County teacher and joined Arthur Rutenberg in 2003.As a former elementary school teacher, she brings her attention to detail and a commitment to customer satisfaction to every custom home they build. With her hard work and success, Barb was twice in the Arthur Rutenberg Homes Sales Top Club. She now looks forward to bringing these same skills to working with clients at Intracoastal Construction. The company is concentrating on building meticulously crafted custom homes in all the gated communities, Intracoastal and on oceanfront lots. They are pleased to have been recently selected as an authorized builder for the Marina Del Palma development. Marina del Palma is a boat-centric, gated community with resort style amenities on the Intracoastal Waterway off Colbert Lane in Palm Coast.

SUPREME COURT WEIGHS JUDICIAL PICK: The Florida Supreme Court will hear arguments in three cases, including a dispute about whether Gov. Rick Scott has the authority to appoint a Northeast Florida circuit judge. The case stems from the upcoming retirement of Judge Robert Foster in the 4th Judicial Circuit, which is made up of Duval, Clay and Nassau counties. Foster was expected to leave office Jan. 7, 2019, which would be the end of his term, because of a mandatory retirement age. But on April 2, Foster sent a letter to Scott making the retirement effective Dec. 31, four business days ahead of schedule. The Scott administration argues — and the 1st District Court of Appeal agreed — that the governor’s acceptance of a judicial resignation before the start of an election-qualifying period creates a vacancy that should be filled by appointment, rather than election. If Foster retired on Jan. 7, the post would be filled by election. Jacksonville attorney David Trotti filed the legal challenge arguing that the opening should be filled in this year’s elections. Trotti tried this spring to qualify to run for the judicial spot but was denied. (Tuesday, 9 a.m., Florida Supreme Court, 500 South Duval St., Tallahassee.)

NELSON, SCOTT DEBATE: Democratic U.S. Sen. Bill Nelson and his Republican challenger, Gov. Rick Scott, will hold their first debate before the Nov. 6 general election. The debate will be taped in a South Florida television studio and broadcast later in the day. (Tuesday, taping at 11 a.m., Telemundo 51 studios, 15000 S.W. 27th St., Miramar. Air time at 7 p.m. on Telemundo stations in the Miami-Fort Lauderdale, Orlando, Fort Myers, Tampa and West Palm Beach markets and across the stations’ digital and mobile platforms.)