Weekend: Partly cloudy with chance of showers and thunderstorms throughout, highs in the lower 90s, nights in the 70s. Details here.
Today’s document from the National Archives and the Astronomy Picture of the Day.
Today’s tides: at the beaches, at the Intracoastal Waterway.
Drought Index is at 62.
The OED’s Word of the Day: phelloplastic, n..
The Live Community Calendar
Today’s jail bookings.

“As I went farther and farther north and it got colder I was aware of more and more advertising for Florida real estate and, with the approach of the long and bitter winter, I could see why Florida is a golden word. As I went along I found that more and more people lusted toward Florida and that thousands had moved there and more thousands wanted to and would.”

–From Rick Perlstein’s “The Invisible Bridge: The Fall of Nixon and the Rise of Reagan” (2014).

The Flagler County Commission meets in workshop at 3 p.m. at the Emergency Operations Center in Bunnell to discuss the possible acquisition of the Bunnell Fire Department. The county would provide fire services for Bunnell, and take ownership of Bunnell’s fire equipment, positioning a new ambulance unit at the Bunnell fire station. The Bunnell City Commission has not yet voted on the proposal.

The Flagler County Commission meets at 5 p.m. at the Government Services Building, Bunnell. The commission is expected to approve a $6.5 million bond issue based on tourist development revenue to finance beach restoration projects in the wake of Hurricane Matthew. The commission is also expected to approve an ordinance opening the county’s commercial zones to medical marijuana dispensaries.

The East Flagler Mosquito Control District board meets at 10 a.m. at the district’s offices, 210 Airport Executive Drive. It is the first board meeting since the district revealed that it had a $1.1 million deficit in its $1.8 million budget. The district’s three board members are expected to hear a plan on closing the gap, including the sale of district assets, layoffs and other cutbacks. They are also expected to decide how to handle the retirement of Director Joe Cash, who has been at the agency since 1978. See: “Flagler Mosquito Control District In Crisis as It Faces $1.1 Million Deficit in $1.8 Million Budget, Weeks After Dedicating New HQ.”

For a full list of dates and locations for the bus, go here.

You are Invited to a Senior Focus Group Wednesday, August 30: On behalf of the City of Palm Coast, ElderSource has been asked to facilitate a senior focus group to discuss the development of additional programs for seniors in Flagler County and the function of an expanded community center. As the City looks to its future and plans for a new facility, the City Council thought it would be in the best interest of the project to seek feedback, questions and commentary from the community before the project progressed any further. Any interested persons or parties are invited to attend and participate in this discussion. ElderSource is a non-profit agency designated by the state as the Area Agency on Aging and Aging & Disability Resource Center for Northeast Florida. ElderSource serves as the focal point to which older adults, adults with disabilities, caregivers, and the general public can receive information, referral, assistance and answers on aging issues. The focus group is scheduled for Wednesday, Aug. 30, from 10 to 11:30 a.m. at the community wing of Palm Coast City Hall, 160 Lake Avenue, in Town Center. If you are unable to attend and would like to submit comments, please email
[email protected] and these will be shared at the meeting. 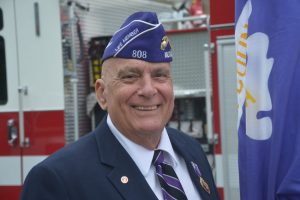 Flagler County Seeking Veteran of the Year Nominations: The award will be presented to a living Flagler County veteran who has not only served the United States with honor, but has used the leadership skills and abilities learned in the military to improve the Flagler County community through selfless volunteer service. If you have a nominee in mind, details are here.

2000-year-old trees are on the chopping block. https://t.co/zUYRD30Hyl

Celebrating the anniversary of the Voyager Golden Records: Behind the effort to explain Earth to aliens. https://t.co/Joy8mn4xkx

The following is an update of ongoing permitting, construction and development projects in Palm Coast, through July 26 (the city administration’s full week in review is here):