Today: Chance of showers and thunderstorms in the morning, then showers and thunderstorms likely in the afternoon. Highs around 90 inland…in the mid 80s coast. West winds 5 mph shifting to the east in the afternoon. Chance of rain 60 percent. Heat index readings 101 to 105. Tonight: Partly cloudy. A 20 percent chance of showers and thunderstorms in the evening. Lows in the mid 70s. South winds 5 mph shifting to the southwest after midnight. Details here.
Drought Index is at 165.
Today’s tides: at the beaches, at the Intracoastal Waterway.
Today’s document from the National Archives.
The OED’s Word of the Day: rizzared, adj..
The Live Community Calendar
Today’s jail bookings.

“As a citizen more than a candidate, I recoil at the prospect of Mr. Nixon as a custodian of this nation’s future, as guardian of the hydrogen bomb. […] Our nation stands at a fork in the political road. In one direction lies a land of slander and scare; the land of sly innuendo, the poison pen, the anonymous phone call and hustling, pushing, shoving; the land of smash and grab and anything to win. This is Nixonland. America is something different.”

–Adlai Stevenson, from speeches written for him by John Kenneth Galbraith during the 1956 presidential campaign.

The Palm Coast City Council meets at 9 a.m. at City Hall in Town Center. The council is expected to set its proposed maximum property tax rate for next year–a rate that may come down in coming weeks, as the council works on its budget, but that may not be set higher than what the council decides today, once it is locked in place and voted on in September. Council members are expected to vote on a proposal by Sheriff Rick Staly to add five deputies to the city’s policing ranks, primarily to form a traffic enforcement unit. The addition would push the city’s policing costs to $3.3 million annually. The council may possibly discuss the future of City Manager Jim Landon in light of disclosures Friday that he has lost the confidence of four of the five council members. 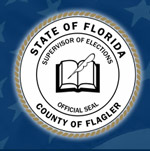 The Flagler County Supervisor of Elections hosts a mock election and open house to celebrate the office’s new voting system, with tours of the elections office and voting hours set between 10 a.m. and 6 p.m. You’ll be able to vote through new voting equipment recently bought and installed. Voters may cast ballots about their favorite county or municipal parks, their favorite events, their favorite potato preparation, and so on. The full ballot is available here. A colorful, detailed invitation is here.

The Flagler County School Board meets for a workshop at 1 p.m. in Training Rom 3B on the third floor of the Government Services Building in Bunnell, and for its action meeting at 6 p.m. in board chambers downstairs at the GSB.

Join local author Bill Ryan to learn about historic and interesting county sites on a bus trip sponsored by the Flagler County Historical Society. The adventure begins at the Holden House, 204 East Moody Boulevard in Bunnell at 10 a.m. and ends at 2:30 p.m. The cost is $20 per person which does not include lunch at the Bull Creek Fish Camp. To make reservations please call 386-439-5003.

Education lawsuit: The 1st District Court of Appeal is scheduled to hear arguments in a long-running fight about whether Florida is providing an adequate public-education system. The case, spearheaded by the groups Citizens for Strong Schools, Inc., and Fund Education Now, is rooted in a 1998 constitutional amendment that says it is a “paramount duty of the state to make adequate provision for the education of all children residing within its borders.” The lawsuit alleged that the state failed to comply with the constitutional amendment, which also says adequate provision will be made for a “uniform, efficient, safe, secure, and high quality system” of public schools. A Leon County circuit judge last year rejected the lawsuit, prompting the appeal. (9 a.m., 1st District Court of Appeal, 2000 Drayton Dr., Tallahassee.)

Candidates for two seats on the Florida Public Service Commission face a 5 p.m. Tuesday application deadline. The terms of PSC members Ronald Brise and Art Graham will expire in January, though both have indicated they will seek reappointment.

A profoundly human story of the impacts of the historic events of the past century in Palestine https://t.co/1Idmeemnbb

Veterans groups worry that a GOP legislative push will lead to privatization of the VA, @russellberman reports https://t.co/sSwiA9Og8a pic.twitter.com/z7KzyKujnP

The following is an update of ongoing permitting, construction and development projects in Palm Coast, through July 14 (the city administration’s full week in review is here):

From Open Culture: “American guitar came of age in the fifties, with the blues, folk, country, and jazz playing of Mississippi John Hurt, Sister Rosetta Tharpe, Merle Travis, Chet Atkins, Wes Montgomery, Les Paul, and so many other incredible players who perfected the sound of Americana before it became inseparable from nostalgia and revivalism. Though it has usually been Chuck Berry who gets—or who took—most of the credit for rock and roll, and who is often enough named as a favorite influence of so many UK guitar heroes, one star British player who made his name a few years later always stuck fast to rock and roll’s deepest roots. We can hear all of those golden age players—Hurt, Tharpe, Travis, Atkins, Montgomery, Paul—in Mark Knopfler’s fingers, in some of the unlikeliest hits of the 80s, songs long on style and flashy solos, but also unquestionably rooted in roots music.” See below and read more.