Today: Partly cloudy. A 20 percent chance of showers and thunderstorms in the afternoon. Highs in the lower 90s inland… Around 90 coast. South winds 5 mph shifting to the east in the afternoon. Heat index readings 99 to 103. Tonight: Mostly clear. Lows in the mid 70s. South winds 5 to 10 mph.Details here.
Drought Index is at 64.
Today’s tides: at the beaches, at the Intracoastal Waterway.
Today’s document from the National Archives.
The OED’s Word of the Day: revolute, v.2.
The Live Community Calendar
Today’s jail bookings.

“In those first years the roads were peopled with refugees shrouded up in their clothing. Wearing masks and goggles, sitting in their rags by the side of the road like ruined aviators. Their barrows heaped with shoddy. Towing wagons or carts. Their eyes bright in their skulls. Creedless shells of men tottering down the causeways like migrants in a feverland. The frailty of everything revealed at last. Old and troubling issues resolved into nothingness and night. The last instance of a thing takes the class with it. Turns out the light and is gone. Look around you. Ever is a long time. But the boy knew what he knew. That ever is no time at all.”

In Court: The lawyer for Aaron Whitley, the 42-year-old Palm Coast man accused of molesting a 12-year-old girl, argues a motion to allow Whitley to have contact with three of his five biological children. The three children are minors. A motion to suppress “all confessions, admissions and statements made by him” in connection with the alleged offense will be argued at a subsequent hearing. (An earlier version of this item had incorrectly reported that that motion would be argued today.) The girl secretly recorded Whitley. It is normally a third-degree felony to record someone in Florida, absent the person’s permission and in places where the person has a reasonable expectation of privacy. However, the Florida Legislature passed a law that allows children who are victims of assaults or abuse to secretly record their assailant without risk of penalty. Today;s argument before Circuit Judge Dennis Craig will test that law in one of its earliest implementations by an alleged victim in Florida. The hearing is at 10 a.m. in Courtroom 401 at the Flagler County courthouse.

The Palm Coast Code Enforcement Board meets at 10 a.m. at City Hall in Town Center.

The Bunnell Police Department has teamed up with a local Bunnell business owner, Theresa Tazwell, owner of Cupcake Café, to seek out all good kids in our neighborhoods.  Our Officers will issue a Cupcake Citation good for one free cupcake to all kids observed doing the right thing.  The “Recipe for a Citation” is detailed on the citation:

This program gets the Officers out of their vehicles and encourages the following: 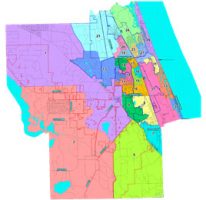 From Elections Supervisor Kaiti Lenhart: In preparation for upcoming election cycles, new precinct boundaries have been approved to accommodate areas of growth in the county. Several voting locations have been impacted. Proposed changes to Flagler County precinct boundaries were presented to the Board of County Commissioners during their public workshop held on May 15, 2017. Two additional precincts were created and the boundaries of several other precincts were adjusted to shift voters from very heavily populated areas. The proposed changes were adopted during the regular meeting of the Board of County Commissioners on June 19, 2017. Affected voters can expect to receive a new Voter Information Card by the end of July 2017. For more information, please call (386) 313-4170. View the new precinct map and related information.

What does poverty look like through the eyes of a child? Our 2012 doc followed the experiences of 3 kids https://t.co/b2PBGvqb7t pic.twitter.com/8OGYxpCiyA

Saudi Arabia has "done more to fund and man terrorist attacks on Americans than any other nation." https://t.co/InGmlR7644

50 Senate Rs would have to agree to change the health care bill in ways that could deepen the public’s concerns. https://t.co/cvixdXwc6P