Weekend: Breezy, cool, high in the upper 60s, lows in the upper 40s. Enjoy the last blast of winter. Details here.
Drought Index is at 357.
Today’s tides: at the beaches, at the Intracoastal Waterway.
Today’s document from the National Archives.
The OED’s Word of the Day: bookish, adj. and adv..
The Live Community Calendar
Today’s jail bookings.

“His fact-challenged remarks come from a wide spread of sources – New York friends he talks to late at night on the phone, people he meets at parties and events, television segments he consumes every night, blogs that are printed out and given to him, videos he is shown on his computer, and aides and advisers, who compete for his ear. He is not interested in lengthy briefings or long meetings where issue experts pass along information about the world’s problems. He likes to ask questions and soaks it in. “If you’re talking to him the most, you can control the information,” one longtime adviser said. “He is a sponge,” another longtime friend said. This person said Trump will take information of dubious value and believe it is true “if it conforms with what he already believes.” This person said Trump is less likely to believe information if it contrasts with what he thinks, and that some aides feed into his worst impulses by giving him questionable information that meshes with his worldview. He has repeated cable news chyrons word-for-word on Twitter, and repeated dubious broadcast reports, as he did with the claims of the terrorist attack in Sweden. “That the president regularly sits in the White House and watches television and sees a story that intrigues him and decides to make that executive branch policy is a frightening prospect,” Jeffries said.”.

–Josh Dawsy of Politico, from a Feb. 25 article.

Take the Palm Coast Citizen’s Survey : City government wants to know how the city is doing, providing services, not providing them, addressing economic development or not, and so on. Fill out the 15-minute survey here.

Friday: It’s the kick-off of the annual Flagler Reads Together, the Friends of the Library’s annual communal reading event that focuses on a single book and encourages everyone in the county to read it. This time it’s as local as it gets: the book is the late Jack Clegg’s “The History of Flagler County,” in conjunction with Flagler County’s centennial celebrations. The month-long Flagler Reads Together kicks off today at 2 p.m. at the Flagler County Public Library’s main meeting room with a presentation by the Flagler County Historical Society’s Sisco Deen. It’s free.

Friday: Fourth annual Flagler County Job Fair, from 11 a.m. to 3 p.m. at the Palm Coast Campus of Daytona State College, 3000 Palm Coast Pkwy SE, Building 3. There are more than 40 businesses registered, with more signing up daily, offering over 360 jobs. Last year over 400 job seekers attended the event, which was hosted by the Flagler County Department of Economic Opportunity, CareerSourceFV, Daytona State College and the Flagler County Chamber of Commerce. A full listing of companies is available at www.flaglercountyjobfair.com or by accessing the mobile app by searching the app store for Flagler Volusia Job Fair Plus.

Friday: Ribbon-cutting to mark the deck expansion of Captain’s BBQ at Bings Landing in the Hammock, 5862 N. Oceanshore Blvd., at 4 p.m.

Friday: Flagler Beach’s 10th Annual Pinewood Derby Race, as part of Flagler Beach’s First Friday. Awards will be presented for the fastest and most creative designed cars in the adult and children’s categories. Get your kit and then… Design it, build it, race it. Rules are here, and your registration form is here.

Friday: The Hit Men return once again to the Flagler Auditorium, 7:30 p.m.

Saturday: 13th Annual Stamp and Coin Show and Chinese Auction, 10 a.m. to 3 p.m., Elk’s Lodge #2709 53 N. Old Kings Road, Palm Coast. Flagler County Stamp and Coin Club, Inc. will hold its 13th Annual Stamp and Coin show This show is open to the general public and everyone interested in stamps and coins. There will be dealers to give free evaluations of your stamp collections and silver and gold coins. Come early and bring your friends. Door prizes every 30 minutes, beginning at 10:30 a.,m. and ending at 2:30 p.m. All proceeds from the Chinese Auction support the FCS&CC youth programs. Hugh variety of items to submit bids. The club is a 501(c)(3) non profit and is the only non profit stamp and coin club in Flagler County. Free parking and admission. Visit the web site for more information and contact.

Saturday: First of two kayaking trips organized by Flagler County’s Centennial Committee, this one, the Haw Creek paddle, is scheduled for launch at 9 a.m. from Russell Landing County Park. Registrations are needed in advance and registrations for the trip close on February 20th. The registration is $15 and each person registering will get a competition style tee shirt commemorating the County’s Centennial. When kayakers arrive at Bull Creek Park a special lunch will be offered for participants who opt for the $11 lunch. Registration for both trips, instructions and detailed directions can be found on the www.flaglercounty.org website or on facebook at www.facebook.com/FlaglerCountyCentennial. Interested kayakers can contact the committee at [email protected]. The second trip is planned for a 9 a.m. launch Saturday April 22 from Longs Landing City Park. 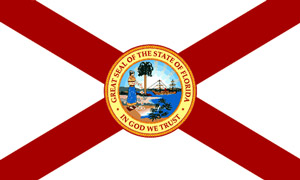 Mostly useless information: Friday (March 3) is Florida Admission Day, the day the weirdest hanging chad in the Union was admitted to the Union, becoming the 27th state in 1845, coincidentally the same day (but in 1931) when the Senate passed a one-sentence bill making “The Star Spangled Banner” the National Anthem. The House had passed the same bill a year earlier. It’s not clear what took the Senate so long to take it up. The bill was sent to President Hoover who, in this case, managed not to ruin it. On the same day in 1935, Paris adopted a plan to synchronize its traffic lights, following a model set by New York City. “Because of the complicated way in which Paris streets wind about and cross each other at every angle,” a front-page story in The New York Times reported, “it has been impossible to apply synchronization as used in a geometrical city like New York, but the scheme the French police will try out will open three or four blocks to continuous traffic on the principal thoroughfares.” Why Palm Coast hasn’t adopted the same approach, in 2017, is beyond us. Today in 1923 is also the very first time Time magazine was published. “The cover subject was the now-obscure Joseph G. Cannon (the former House Speaker),” Time’s current website notes. “The whole thing was only 32 pages, including the front and back covers. There are only a few photographs or illustrations, and nary a chart or graphic in sight.” The magazine The magazine “contains word of the first helicopter, a possible change in divorce laws, the release of the film ‘Adam’s Rib,’ a new one-cent cigarette tax in Indiana and the latest figures in German reparation payments—not to mention a critical trashing of ‘The Waste Land,’ the poem by T.S. Eliot. Time claims you can click a link to read the whole issue. Not true: the magazine wants you to subscribe first. “What are the roots that clutch, what branches grow / Out of this stony rubbish? Son of man,/ You cannot say, or guess, for you know only / A heap of broken images…”

The Revenue Estimating Conference will hold what is known as an “impact” conference. (Friday, 9 a.m., 117 Knott Building, the Capitol.)

♦ March 6, 13, 20: Women’s Self Defense – Three-week class on consecutive Mondays, March 6, 13 and 20, 6-8 p.m. The March 6 class will be at Palm Coast City Hall, 160 Lake Ave., and the other two classes will be at Frieda Zamba Pool classroom, 339 Parkview Drive, Palm Coast. Women, ages 12+, learn effective methods to ward off attackers from Sgt. Michael Lutz of the Flagler County Sheriff’s Office. Become more aware of your surroundings and the methods to protect yourself. Classes are free, but pre-registration is required by 6 p.m. March 4 (while space available) at www.palmcoastgov.com/register. More info: 386-986-2323.

♦ March 7: Bunnell and Flagler Beach hold their municipal elections.
♦ March 10: Flagler Reads Together event (the Friends of the Library’s annual communal reading event that focuses on a single book and encourages everyone in the county to read it: the late Jack Clegg’s “The History of Flagler County,” in conjunction with Flagler County’s centennial celebrations). The March 10 event, at 2 p.m. in the Doug Cisney Room at the Flagler County Public Library on Palm Coast Parkway, is a presentation by Bob Stone addressing the Cattle industry in Florida. Folklorist and media producer Bob Stone’s multi-media presentation explores and celebrates the history and culture of the nation’s oldest cattle ranching state from the colonial period to the 21st century. You will see and hear all aspects of Florida cattle ranching traditions including material culture such as Cracker cow-whips and unique ranch gate designs, swamp cabbage and other foodways, cowboy church and Cracker cowboy funerals, Seminole ranching past and present, occupational skills such as roping and branding, our vibrant rodeo culture, side-splitting cowboy poetry, feisty cow-dogs, and much more.
♦ March 10: Movies in the Park – Friday, March 10, 7:45 p.m. in Central Park at Town Center, 975 Central Ave., Palm Coast. Families will enjoy a family friendly movie on the park’s giant outdoor movie screen. This month’s feature: The Jungle Book. Bring your blanket, lawn chairs and snacks and invite your friends and neighbors to join you at this free, monthly family activity offered by Palm Coast Parks & Recreation and Flagler Schools. More info: 386-986-2323 and www.palmcoastgov.com/movies.


♦ March 10-12: 2017 Florida State Scholastic Chess Championship, at the Wyndham Hotel on International Drive in Orlando. This is also the qualifier for the Denker, Barber and National Girls Tournament Champions. This year each of these 3 events are awarding a $5,000 scholarship good for any university or college in the Country to the top finisher in each event. The top finishers will also get qualifying spots in the World Youth Tournament. Online entry and more information are available at www.floridachess.org.

Meanwhile today, you may have missed Egypt's Mubarak going free of all charges in Arab Spring killings. My latest: https://t.co/oDaoiciZrc

The real causes of the worst drug crisis in US history https://t.co/7tqAfvMO04

This scathing indictment of Israeli society by a local TV host has gone viral >> https://t.co/EEy71spiLu pic.twitter.com/NCyDBAqGoT

Cornel West on Why James Baldwin Matters More Than Ever | @lithub https://t.co/UEtHh6VP2Q