Weekend: Pleasant, mostly sunny throughout, highs in the 70s, lows in the 50s. Details here.
Drought Index is at 378.
Today’s tides: at the beaches, at the Intracoastal Waterway.
Today’s document from the National Archives.
The OED’s Word of the Day: poindexter, n..
The Live Community Calendar
Today’s jail bookings.

“For me, as for Alexander Pope and many others, the proper study of mankind has always been man; and until it can be shown to me that the scientific advances of this age have relieved man of some of the moral challenges and dilemmas which press themselves upon him, I must continue to pursue what others are at liberty to regard as my outdated ruminations and reactions.”

–George F. Kennan, from Around the Cragged Hill: A Personal and Political Philosophy

Friday: Lunch ‘N Lecture Series, Palm Coast City Hall in Town Center, 12:30 p.m., a free lunch and presentation with Dr. Nanavaati, a local certified cardiologist. He will discuss Peripheral Artery Disease – everything related to how it occurs and how to manage it.

Friday: Live From Nashville, at the Flagler Auditorium, 7:30 p.m.

Saturday: Movie Nights by the Surf at Veterans Park, 5:30 p.m.: The movie will be shown at dusk, outdoors at Flagler Beach’s Veterans Park, located at the corner of Moody Blvd. and Highway A1A right across the street from the beach! Admission is free! Be sure to bring your family & friends as well as a blanket. Food and drinks will be available for purchase as well as bounce house activities and more.

Saturday: The Art of Carnival at Calypso Fine Art Gallery, opening Saturday evening at 6 p.m. at Calypso, 4601 E Moody Blvd., Bunnell (In Marvin’s Garden shopping center). Artist Weldon captures a celebration or festival with each painting in this Carnival Series, whether on Eastern Parkway, in Orlando, St Pete, or Miami. He creates an endless dance with feathered costumes, vivid colors, and the loud in-your-face attitude to be found jumping in the bands.

Saturday: Two performances only, at 2:30 and 7 p.m., of “Ms. Jackie’s Bus,” an original stage play about the challenges of adolescence–from bullying to racism to homosexuality. At the Ormond Beach Performing Arts Center, 399 North U.S. 1, Ormond Beach, Adults $15, students $12, call the box office at 386/676-3375 and click here for details about the play. 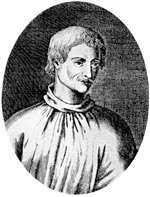 Mostly useless information: The Dominican philosopher Giordano Bruno, who may not have a Twitter hashtag but was an influential voice of the Reformation, was so ahead of his time in 16th century that he theorized that stars were like the sun, distant suns with their own solar systems, possibly rich with life. The universe, he thought, had no center, but was rather infinite. That did not please the Catholic Church, which considered Earth to be the center of the universe, the only world where God created life. Bruno had to be silenced. The Roman Inquisition, not known to have been among the most vicious, though it had its very low points, tried him for heresy, and on Feb. 17, 1600, burned him alive. It took God a very long time to make up for the murder but God finally did so with the birth, on the same day 53 years later, of Arcangello Corelli, one of the Baroque’s great composers. That Italian died a less roastful death. On Feb. 17 in 1801, Thomas Jefferson, on the 36th ballot, is elected president, defeating Aaron Burr, and marking the first time the United States would peaceful transfer power from one party to another.

Medicaid and welfare numbers: The Social Services Estimating Conference will consider caseloads and expenditures in the Temporary Assistance for Needy Families, or TANF, program and caseloads in the Medicaid program. (Friday, 9 a.m.)

♦ Feb. 23: County Administrator Craig Coffey is the speaker at the Flagler Chamber’s Common Ground Breakfast Series at the Hilton Garden Inn, in Palm Coast. Registration begins at 7:45 a.m., breakfast is at 8 a.m. $20 for members in advance. Email [email protected] or go here for more information. Details here and here.
♦ Feb. 27: Flagler County Stamp and Coin Club holds its monthly meeting at the VFW Post 8696 47 N. Old Kings Road. Doors open at 4:30 p.m., the meeting starts at 6. The 90 minutes before the meeting is for anyone wishing to buy, sell or trade stamps and coins. The club’s meeting is from 6 to 7:30 p.m. There is a live auction of coins and stamps at the end of the meeting. The club is open for members and the general public who are interested in stamp and coin collecting and investing. Free stamp and coin evaluations at all our meetings. For more information visit the web site here.

♦ Feb. 28: Join the Flagler County Education Foundation’s 14th annual Mardi Gras gala at Halifax Plantation, 3400 Clubhouse Drive, Ormond Beach, at 6 p.m. This is one of the foundation’s annual fundraisers. Tickets are $100 per person. Click here to register or call today at 386/437.7526 for event details. Get a chance to talk to Joe Rizzo, the new executive director, and learn more about Flagler county schools.

♦ March 10-12: 2017 Florida State Scholastic Chess Championship, at the Wyndham Hotel on International Drive in Orlando. This is also the qualifier for the Denker, Barber and National Girls Tournament Champions. This year each of these 3 events are awarding a $5,000 scholarship good for any university or college in the Country to the top finisher in each event. The top finishers will also get qualifying spots in the World Youth Tournament. Online entry and more information are available at www.floridachess.org.
♦ March 22: The boy Scouts Council holds its Golden Eagle Dinner at 6 p.m. at Hammock Beach Resort, honoring Bob Cuff, now a Palm coast City council member.
♦ March 28: The Flagler Forum, the discussion group organized by Ed Fuller, hosts a panel discussion featuring Flagler County’s local media, including Palm Coast Observer Editor Brian McMillan and FlaglerLive Editor Pierre Tristam, at the Hilton Garden Inn, Palm Coast, at 6:30 p.m.

Until Donald Trump came along there hadn’t been a truly embarrassing Presidency: https://t.co/f8VcQzf1nZ pic.twitter.com/XZsyup4rT3

What Trump Is Doing Is Not O.K. https://t.co/bukuuTCgpp

Is the Trump Era Really Off to Such a Slow Start? https://t.co/nROKFMCT6U pic.twitter.com/hEWd1sszHZ

Only 20 percent of Americans say they trust newspapers: https://t.co/h5yaKCgfSD pic.twitter.com/728FAvjFcJ

Australia is about to murder a million kangaroos https://t.co/tTfZdDNNGI pic.twitter.com/jYm1CP2Ax6

"His name will endure through the ages, and so also will his work.” https://t.co/N7BzUIc1mO