Weekend: Sunny, highs in the lower 80s, lows in the upper 50s. Details here.
Drought Index is at 413.
Today’s tides: at the beaches, at the Intracoastal Waterway.
Today’s document from the National Archives.
The OED’s Word of the Day: verklempt, adj..
The Live Community Calendar
Today’s jail bookings.

“Erasmus was a humanist pleading for people to be reasonable–and also saying bluntly that people who are not reasonable should not be brought into technical discussions of theology. Moreover, he believed that human beings could indeed be reasonable, because when Adam and Eve had fallen in the garden of Eden, their reason have not been fully corrupted, only damaged. Luther by contrast was a prophet proclaiming an inescapable message to all fallen humanity. And his response to Erasmus’s Diatribe, uncompromisingly entitled Of the Slavery of the Will (De Servo Arbitrio, December 1525), Luther set out the full pitiless message that human beings could expect nothing but condemnation, and have nothing to offer God that would merit salvation. “If we believe that Christ redeemed man by his blood, we are forced to confess that all of man was lost; otherwise, we make Christ either wholly superfluous or else the redeemer of the least valuable part of men only; which is blasphemy, and sacrilege.” This was the parting blow of his book, and it was the very heart of the Reformation’s reassertion of the darkest side of Augustine: A proclamation of the humanist project of reasonable reform was redundant. Erasmus could not accept this old embracing view of the fall.”

–Diarmaid MacCulloch, from The Reformation: A History

Saturday and Sunday: “John and Jen,” the musical, at City Repertory Theatre in Palm Coast, is the story of a brother and sister’s relationship over time. The first act portrays Jen and her brother John growing up in the 1950s and ’60s, and their increasing estrangement: As Jen falls under the spell of the counterculture and the Summer of Love, she morphs into a drug-dabbling hippie chick. John yields to the dominance – and abusiveness – of their stern father and joins the Navy, and he’s promptly shipped off to Vietnam. The second act flashes forward in time: Jen is a 20-something single mother raising her newborn son, whom she has named John after her brother. As son John grows up, Jen’s suffocating parenting threatens to alienate him and drive him away. The play closes out City Repertory’s season: at 7:30 p.m. Saturday May 6, and at 2 p.m. Sunday May 7. Performances will be at City Marketplace, 160 Cypress Point Parkway, Suite 207B, Palm Coast. Tickets are $25 adults and $20 students with ID, available by calling 386-585-9415 or online at crtpalmcoast.com.

Friday: Lifeguard Towers Dedication: Join members of the Flagler Beach City Commission and staff in the dedication of the city’s new Lifeguard Towers. The labor and material for these towers came through donations of labor from Keystone Homes and material from Builders First Source. It should also be noted the donations and design were through the efforts of Commissioner Rick Belhumeur. 2 p.m. under the Pier A-Frame at 215 S. Ocean Shore Boulevard, Flagler Beach.

Friday, Saturday, Sunday: The Little Theater of New Smyrna Beach presents “The Girls of the Garden Club,” May 5-8 and May 11-14 at 8 p.m. (2 p.m. Sundays). A hilarious new play by one of our theatre is leading writers of comedies that, as the title suggests, deals with the indomitable women whose lives revolve around the often-outlandish doings of the local garden club. 726 Third Avenue, New Smyrna Beach. (386) 423-1246. 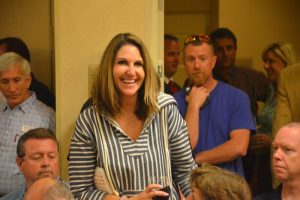 Saturday: Canal Street Historic District Craft Beer Walk and Gallery Walk, New Smyrna Beach. Sample craft beers along historic canal street. Tickets are $20 and include a six-ounce Canal Street souvenir glass and 12 sampling tickets that can be redeemed at 10 locations in the district. The walk is held on the first Saturday of each month. Artistic vendors set up along the historic Canal Street from 10 a.m. – 5 p.m. Musical artists play from 11 a.m. – 1 p.m. in Christmas Park, 101 Live Oak Street. Galleries feature solo and group exhibitions and artist talks in the Douglas Avenue area of the district and at the Hub from 4-8 PM. Admission is free.

Sunday: The Annual Picnics and Pops concert of the Jacksonville Symphony Orchestra, presented by the Palm Coast Arts Foundation, at the Foundation’s grounds in Town Center, off Central Avenue, starting at 6 p.m. with the picnic.

Sunday: Local Law Enforcement Shootout: Cracker cowboys presents 2017 CFDA Cowboy Fast Draw Association Florida State and Eastern U.S. Territorial Championships. Come out and watch the local law enforcement shootout for the fastest gun in Flagler County. At High Noon! Please donate to one of the charities of your choice to promote your fast draw shooter for a chance to call themselves the fastest gun in Flagler County. https://www.youthranches.org/ and http://christmascometrue.org/ and Boys Scouts Troop 400 in Bunnell and www.flagergunclub.com and www.cracker-cowboys.com. At the Flagler Gun & Archery Club (1290 County Road 90 Bunnell FL 32110), 12 p.m.

Crews have started roadwork to widen and resurface County Road 13 between U.S. 1 and County Road 205. The work is scheduled to finish before September 28. There will be brief, single-lane closures to accommodate the work. “It shouldn’t present too much of an inconvenience in the area, and we ask for your patience to keep the workers safe,” County Administrator Craig Coffey said. “In the long run, the upgrades to the roadway will benefit the residents of Espanola and those who use it to get to western Flagler County.”

♦ May 9, 16, 23: Women’s Self Defense: Three-week class on consecutive Tuesdays, May 9, 16 and 23, 6-8 p.m., at Palm Coast City Hall, Community Wing, 160 Lake Ave., Palm Coast. Women, ages 12+, learn effective methods to ward off attackers from Sgt. Michael Lutz of the Flagler County Sheriff’s Office. Become more aware of your surroundings and the methods to protect yourself. Classes are free, but pre-registration is required by 6 p.m. May 7 (while space available) at www.palmcoastgov.com/register. More info: 386-986-2323.
♦ May 10: Discover Trip to Old Florida, 8 a.m.-4:30 p.m. to and from Palm Coast City Hall, 160 Lake Ave. Take a look at “Ole Florida” on a road trip to Clermont with three stops: the Lake Ridge Winery, to sample seven different wines; the Presidents Museum; and the Florida Citrus Tower. Cost is $50; lunch at participant’s expense at local BBQ restaurant. Pre-registration is required by May 3: www.palmcoastgov.com/register. More info: 386-986-2323.
♦ May 11-15: New Smyrna Beach Blues Festival. This much-anticipated returning event will feature scores of bands playing at multiple locations around town. Rich with history, tradition and diversity, the New Smyrna Beach Blues Festival will be THE place to get your groove on this summer. Admission is FREE unless otherwise stated; some locations are 21 and up. Details here.
♦ May 12: Movies in the Park, 8:20 p.m. in Central Park at Town Center, 975 Central Ave., Palm Coast. Families will enjoy a family friendly movie on the park’s giant outdoor movie screen. This month’s feature: Zootopia (PG). Bring your blanket, lawn chairs and snacks and invite your friends and neighbors to join you at this free, monthly family activity offered by Palm Coast Parks & Recreation and Flagler Schools. More info: 386-986-2323 and www.palmcoastgov.com/movies.
♦ May 15: The Flagler Beach Police Department and the local 7-ELEVEN store have partnered to host another edition of “Doughnuts with Doughney” from 8 to 10 a.m. The Flagler Beach 7-ELEVEN convenience store is at 408 South Oceanshore Boulevard. The two hours in that it provide the public an opportunity to meet and speak openly with Chief Doughney about issues or concerns in Flagler Beach. The location of the meeting provides citizens easy access to both the 7-ELEVEN and Chief Doughney, in a relaxed, non-threatening atmosphere.
♦ May 15: Free legal clinics: The Clerk of Circuit Court and Comptroller in partnership with the Flagler County Bar Association is proud to present a four part series of legal clinics free of charge. Come out and speak to attorneys who are experts in their respective field of law for free. These clinics will be held at the Flagler County courthouse in the 1st floor jury assembly room, 1769 E. Moody Blvd. building #1, Bunnell, from 5 p.m. to 7 p.m. Today’s class: Family Law: Divorce, Name change, Adoption, Domestic Violence Injunctions etc. See the flyer here.
♦ May 16: The Flagler County School Board holds a workshop at the Government Services Building’s Training Room 3B (third floor) on the contract with its new superintendent, James Tager.
♦ May 16: The Florida Judicial Qualifications Commission holds a hearing the the case of Circuit Judge Scott DuPont, who faces several charges of misconduct during his 2016 re-election election campaign. He has admitted wrongdoing. The 9 a.m. hearing is taking place in courtroom 406-7 at the Duval County Courthouse, 501 W. Adams Street, Jacksonville, before a six-member panel: Eugene Pettis, Steven P. DeLuca, Robert Morris, Michele Cummings, Harry Duncanson (a lay member of the commission) and Jerome S. Osteryoung.
♦ May 18: Food Truck Tuesday, 5-8 p.m. at Central Park in Town Center, 975 Central Ave, Palm Coast. Purchase and enjoy delicious cuisine available from food trucks situated along Park Street next to Central Park. Free entertainment is also provided. More info: www.palmcoast.gov.com/foodtruck or call 386-986-2323.
♦ May 18: The Flagler County Sheriff’s Office holds a candlelight vigil at 7:30 p.m. at the Flagler County courthouse, followed by a walk to the Sheriff’s Operations Center at 7:45 p.m.
♦ May 26-28: Country 500 2017, also called “The Great American Music Fest at Daytona,” featuring the biggest stars in country music spread over three days and nights, programmed on three huge performance stages-all specially designed and built for the festival. Country 500 will take place on the infield of the world-famous Daytona International Speedway, allowing fans to actually camp out in the infield.
♦ May 27: Wine Walk: Explore interesting wines inside and outside host locations and walk Flagler Avenue in New Smyrna Beach from 1-7 p.m. During the progressive event, taste your choice of more than 100 showcased wines. Wine tasting passports are $25 and are available at the corner of Flagler Avenue and Peninsula Avenue, at the corner of Flagler Avenue and Cooper Street, or at the corner of S. Atlantic and Flagler Avenue. Passports include 20 tasting tickets and a keepsake wine glass. Some locations feature both one- and multi-ticket wines to sample. Those who want to share their 20 tasting tickets with a friend may get an additional wine glass for $5.
♦ June 3: Sample craft beers along historic canal street. in New Smirna Beach from 1 to 7 p.m. Tickets are $20 and include a six-ounce Canal Street souvenir glass and 12 sampling tickets that can be redeemed at 10 locations in the district.  The walk is held on the first Saturday of each month. For more information, go here.
♦ June 3: Art Stroll and Gallery Walk, 10 a.m. to 5 p.m.: Artistic vendors set up along the historic Canal Street in New Smyrna Beach. Musical artists play from 11 a.m. – 1 p.m. in Christmas Park, 101 Live Oak Street. Galleries feature solo and group exhibitions and artist talks in the Douglas Avenue area of the district and at the Hub from 4-8 p.m. Admission is free.

Perspective: "Embracing the Confederacy in modern-day Virginia? That’s a lost cause, for sure." https://t.co/enY6HQrEnp

What the forced exodus at Fox News means for Rupert Murdoch: https://t.co/lYD0dR9X3G pic.twitter.com/ORNIdoChtU

Google said it would scan all 129,864,880 books in the world, building the greatest library that's ever existed. https://t.co/ih9rsBf2RZ

The following is an update of ongoing permitting, construction and development projects in Palm Coast, through April 26 (the city administration’s full week in review is here):