Weekend: Mostly cloudy with chance of showers and slight chance of thunderstorms, hot again in the upper 80s. Nights in the mid-70s. Details here.
Today’s document from the National Archives and the Astronomy Picture of the Day.
Today’s tides: at the beaches, at the Intracoastal Waterway.
Drought Index 40.
The OED’s Word of the Day: casus omissus, n..
The Live Community Calendar
Today’s jail bookings.

“I have always found it strange that a nation whose prosperity is based entirely upon cheap immigrant labour should be so unrelentingly xenophobic.”

Free For All Fridays: Brian McMillan sits in for David Ayres and welcomes Carl Laundrie, the former county government spokesman, who’ll speak about flooding at Princess Place (which caused the postponement of the Creekside Festival, which had been scheduled for this weekend), John Subers, executive director of the Florida Hospital Flagler Foundation, will speak about this year’s launch of the Pink Army for breast-cancer awareness and fund-raising, and Palm Coast City Manager Jim Landon will talk drainage and tax increase, all starting with a commentary by FlaglerLive Editor Pierre Tristam, a little after 9 a.m.

First Friday at Flagler Beach’s Veterans Park, with vendors, games, food, music and other delights, from 6 to 9 p.m.

Friday: Turtle Palooza Art Gala Reception at Ocean Art Gallery, 206 Moody Blvd. (SR 100), Flagler Beach, 5 to 8 p.m. Sea turtle nesting season ends October 31 and Ocean Art Gallery is celebrating sea turtles the entire month of October with an art gala, art raffles, and an update about nest hatching results. All of this will take place during what gallery owner Frank Gromling calls a “Turtle Palooza!” All events will take place at the gallery’s 206 Moody Blvd. (SR 100) location in downtown Flagler Beach. The gallery will start the activities on October 6 with a gala art gathering from 5 – 8 pm with the showing of sea turtle art by nine artists, accompanied by live music, light refreshments and fun. This gala coincides with Flagler Beach’s “First Friday” music event at Veterans Park across from the gallery.

Friday, Saturday, Sunday: Florida Pokemon Regional Championship. New to the Ocean Center. Tickets are available in $5 increments, and the public is invited to come and watch the trading card and video game action. Players will compete for prizes and to earn championship points for the 2018 world event, which will bring together players from more than 40 counties. For more information, visit www.poke.regionals.com. 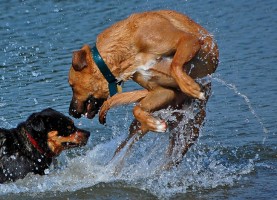 Saturday: Flagler Wagler Deputy Dog 2K Beach Run, Flagler Beach, on the beach across from the Beach Front Grille, 244 S. Ocean Shore Boulevard. This run is for all the furry human loving dogs that want to come run on the beach! Yup, they get to run on the same beautiful hard-packed sand as their human counterpart for a short and fun 2K. 10 a.m. to 2 p.m.

Saturday, Sunday: Corvettes at the Beach Car Show: The Flagler County Corvette Club presents our 16th annual “Corvettes at the Beach” car show on Sunday, October 8, 2017. The show is located at the intersection of Route 100 and A1A, Flagler Beach. Day of Show Registration is $35 and is Display Class Only. Show registration is from 7:30am until 10:00am. Show hours are 10:00am to 3:00pm. The event is free to spectators and will take place rain or shine. Door prizes, gift baskets, food, music, and 50/50 raffle! Visit the website below for more details. http://www.flaglercountycorvetteclub.com/

Saturday: Founding of the Castillo Celebration and Re-enactment: Join National Park Service rangers and 17th-century Spanish re-enactors as St. Augustine celebrates the history of the Castillo de San Marcos. Established on Oct. 2, 1672, the fort was the guardian of colonial San Agustín. Today, this National Park Monument is the oldest masonry fortress in the continental United States. On its anniversary, families can participate in activities and watch a historical re-enactment from Florida Living History of the fort’s groundbreaking on the Castillo lawn for free. Admission inside the Castillo is $10 for adults and free for children under 15. Location: 1 S Castillo Dr., St. Augustine. For more information, email [email protected] or visit www.nps.gov/casa/index.htm.

Saturday: NAACP Freedom Fund Awards, Italian American Social Club (45 Old Kings Road North), noon to 4 p.m. The National Office of the NAACP is committed to moving the organization forward. And, since the Flagler branch is equally committed to upholding the mission and purpose of the oldest civil rights organization, the branch has selected three individuals for awards in celebrating their achievements. They are: For “Outstanding Service to the Community,” Shelley Ragsdale, President of the African American Mentoring Program; For “Outstanding Service to the Branch,” Orlando Johnson, Chair of the Economic Development Committee for the branch; For “The President’s Award,” Eric Josey, Chair of the Legal Redress Committee for the branch. Music will be provided for everyone’s listening pleasure. Tickets are $50 per person and available through members of the Executive Committee, or by calling the branch at 386-446-7822.

FINANCE REPORTS DUE IN HD 44, HD 58: Campaign-finance reports are due for candidates in special elections in state House District 44 and House District 58. Former Rep. Eric Eisnaugle, R-Orlando, left the District 44 seat this spring after being appointed a judge on the 5th District Court of Appeal. The candidates in an Oct. 10 special general election are Republican Bobby Olszewski and Democrat Eddy Dominguez. Former Rep. Dan Raulerson, R-Plant City, resigned from the District 58 seat because of health issues. Republicans Yvonne Fry and Lawrence McClure are battling in an Oct. 10 GOP primary, with the winner advancing to a Dec. 19 general election.

Encouraging bad policing is an insult to the officers who perform their jobs with courage and character every day.https://t.co/t1QVXSLyyp pic.twitter.com/eSD2clBXGA

A crushing reminder from Rebecca Solnit: "nearly 2/3 of women killed by guns are killed by their partner or ex." https://t.co/ej1Tiw3kRb