Weekend: Partly cloudy, mild, highs in the 70s, lows in the 50s to lower 60s. Details here.
Today’s document from the National Archives and the Astronomy Picture of the Day.
Today’s tides: at the beaches, at the Intracoastal Waterway.
Drought Index32
The OED’s Word of the Day: arride, v..
The Live Community Calendar
Today’s jail bookings. 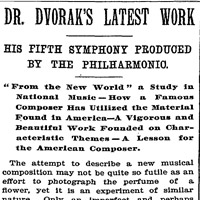 “The attempt to describe a new musical composition may not be quite so futile as an effort to photograph the perfume of a flower, yet it is an experiment of similar nature. Only an imperfect and perhaps misleading idea of the character of so complex a work of art as a symphony can be conveyed through the medium of cold type; yet, when there is no other way, even that must be tried. Accepting, then, the doubtful premise that music can be treated intelligently In words, no one need look for a more fruitful topic at present than the new symphony made known by the Philharmonic Society at Music Hall on Friday afternoon and repeated last night, to the evident delight of a large audience. This work ls entitled “Z Novecho Sveta,” which is, being translated, “From the New World.” It is dated 1893, and is Opus 95 of Antonin Dvorak, the famous Bohemian master, now a resident of this city.”

–From the New York Times review of Dvorak’s premier of his Symphony From the New World at Carnegie Hall, Dec. 16, 1893.

Friday: The 10th Annual Christmas with a Deputy is scheduled to start at 5:30 p.m. in the parking lot of Chiumento Dwyer Hertel Grant law firm in Town Center. That’s when Flagler County’s poorer children are paired with a cop, handed a $150 gift card, and set loose at Target to buy their Christmas presents, with a deputy tagging along. The children get to ride to Target in a cop car, all lights ablaze.

Saturday: Breakfast With Santa at 10 a.m. at Matanzas High School, $5 per person, proceeds to go toward Flagler County Relay For Life.

Saturday: Car Show and Toy Drive for Wolfson Children’s Hospital at Tony’s pizza in Flagler Beach, with a DJ, cool cars, giveaways, an awesome cause, and pizza. For every toy donated you will receive one raffle ticket into the drawing for multiple prizes. You DO NOT have to bring a toy to attend but it is much appreciated if you do. Event starts at 2 p.m., runs until 6 p.m. 428 Beach Village Dr, Flagler Beach. Call 439-9900.

Saturday: Abundant Life Ministries-Hope House’s Humanitarian of the Year is announced. The award will be presented during the “Christmas to Remember” celebration for children in foster care and other children under the dependency court system. The event will be held from 11 a.m. to 3 p.m. at the Flagler County Fairgrounds, 150 Sawgrass Road, Bunnell.

Saturday: Now in its 34th year, the Palm Coast Holiday Boat Parade is scheduled for 6 p.m., departing from the Cimmaron Basin. The parade will be escorted by boats from the Flagler County Sheriff’s Office, Tow Boat U.S., the Florida Fish and Wildlife Conservation Commission, and the Palm Coast Auxiliary of the U.S. Coast Guard. Mayor Milissa Holland will serve as Grand Marshall. Details and registration form here.

Ongoing: the 12th Annual Fantasy Lights Festival at Central Park in Palm Coast’s Town Center, hosted by the Rotary Club of Flagler County: 6:30-9 p.m. each night. Fantasy Lights is a free, self-guided walking tour around Central Park with 40 large animated light displays, festive live and broadcast holiday music, holiday snacks and beverages. A favorite for the kids is Santa’s Village with a collection of elf houses festively painted and nestled among the lights, warm fire to roast marshmallows or create s’mores, and encircling the village is Santa’s Merry Train Ride.

Skip A Week: A Message from the St. Johns Water Management District on Not Mowing Your Lawn: One of the great things about living in Florida is the beautiful weather we have most of the year. A flip side of our year-round warm weather is not remembering that our lawns and landscapes take a winter break and naturally go dormant, reducing their need for irrigation. This year the St. Johns River Water Management District is joining in the Skip a Week campaign developed by the Southwest Florida Water Management District to encourage efficient irrigation practices specific to winter months. This campaign focuses on studies showing that lawns need only about three-quarters of an inch of water every 10 to 14 days during the winter, and less if it has rained. Irrigating every other week during December, January and February (skipping a week) could save more than 1 billion gallons of water in our District alone. That’s a lot of water! Watering too much makes lawns less able to survive dry conditions, encouraging shallow, weak root systems, leading to weeds, pests and diseases. In addition to the Skip a Week campaign, our winter watering restrictions of one-day-per-week on designated days allow sufficient irrigation to maintain healthy lawns. You’ll know if your lawn needs water when blades fold in half, turn blue-gray or leave footprints.

Hoaxes succeed by promising us what we wish for. P.T. Barnum called it “humbug,” a form of fakery that doesn't deceive so much as fill its beholder with wonder https://t.co/kdqlQhGct7

A day before net neutrality repeal, AT&T revealed a plan to send internet over your power lines https://t.co/U7dZUELgkS

If indeed 100 Treasury analysts worked on Mnuchin's report, that comes out to under four words per analyst https://t.co/bQqEzJqXU7

"No matter how much we may wish to believe that they are foreign to our system, the politics of racism and white resentment have been a perennial feature in our politics." @KevinMKruse in @BooksandtheArts on Linda Gordon's The Second Coming of the KKK https://t.co/4LdQLmFvph