Weekend: Highs in the mid-90s Friday, with the heat index rising to 105, cooling to mid 80s Saturday and Sunday, but chances of rain will remain well above 50 percent throughout the weekend. Nights: muggy lows in the mid-70s. Details here.
Today’s fire danger is moderate. Flagler County’s Drought Index is at 72.
Today’s tides: at the beaches, at the Intracoastal Waterway.
Today’s document from the National Archives.
The Live Community Calendar
Today’s jail bookings.

“So we’ve built a massive and ruthless police apparatus for the ordinary immigrant population, complete with a sprawling, essentially extralegal detention complex, to catch and detain people who have not committed any actual crimes. ¶ This gigantic, menacing complex of bars, chains, buses, and airplanes built to deal with the immigrant poor stands in stark contract to the tiny, disorganized confederation of perhaps a few hundred lawyers policing transnational financial companies. We don’t have special jails for foreigners or executives from foreign firms who steal by the million or billion.”

–From “The Divide: American Injustice in the Age of the Wealth Gap,” by Matt Taibbi (2014).

Friday: Turtle Talk: A Sea Turtle’s Journey: Join a Park Ranger for a glimpse into the intricate world of remarkable sea turtles. Learn about their life cycles, habitat, behavior, and how human actions can help preserve these majestic turtles for generations to come. Registration required. Contact Celena Cline at 386-517-2086 or email [email protected] with any questions. Park entrance fee is $5.00 per carload of 2-8 people; one person is $4.00; bicyclist or pedestrian is $2.00. (10 to 11 a.m., Gamble Rogers Memorial State Recreational Area at Flagler Beach (3100 S. Oceanshore Blvd.) 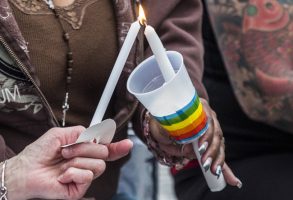 Friday: A candlelight vigil and fundraiser in memory of the 49 victims killed and the 53 injured at the Pulse nightclub in Orlando. The vigil is scheduled for 8:30 p.m. on the beach just north of the Flagler Beach pier.

Saturday: “ReVive,” a new show at Calypso Fine Art Gallery, opens at 6 p.m. with a reception. The show features Doreen Hardie a semi impressionist painter, Richlin Burnett-Ryan, an experimental expressionist, and Weldon Ryan a realistic painter. “This exhibit is a light-hearted visually stimulating excursion,” the Ryans say. “Come and get revived by nature.” 4601 E.Moody Blvd, Bunnell, Suite/Unit K12. In Marvin’s Garden Business Center Complex. For more information on this art exhibit or the gallery, please call (718)554-6180 or (386) 916-4438.

Saturday: Art that Builds at Salvo Art Project: JJ Graham writes: “After what consisted of a near two year journey to achieving air conditioning here @ Salvo Art Project, it is suffice to say that my brain has chilled enough to function properly and with that an idea occurred to me. What if I could create paintings that could also create…that could build?” 6 p.m. at Salvo Art Project, 313 Old Brick Rd, Bunnell, Live music by Luis Mario and his Latin Jazz, Wine & hors d’oeuvres – $10 cover charge / kiddos free.

Woman Survives Crashing Under Trailer at 70 MPH and Getting Dragged 1/4 Mile on I-95: For a reason that hasn’t been determined, the FHP investigator said, the woman lost control of the Elantra, sending it onto the guardrail. The collision caused the car to bounce back into traffic–right against, and under, a tractor trailer. The Elentra ended up partly catapulting through the trailer’s midsection and smashing against its rear wheels, with the top of the car sheared off. The Elantra’s front actually traveled far enough to jut out of the other side of the truck.

Criminal Torment: Once Again, Phillip Haire Is Arrested Days After Other Charges Are Dropped: Phillip Haire must feel like he has a target on his back: the 19-year-old Palm Coast resident is having difficulties steering clear of rearrests, even though he’s yet to be found guilty on any of the charges he’s faced the three times he’s been arrested this year. Haire was arrested again Wednesday on the sort of minor pot charge numerous states have quit arresting people for.

Yes, Palm Coast Wanted to Boot County EMS Crews Out of Station 22, But That Fire Is Out For Now: A look at the record provides a clearer perspective on how the issue emerged, and how the city’s tone, not the county’s, determined the course of this latest of many conflicts undermining the cohesion of city-county relations.

“Grief Beyond Description”: In Orlando, Obama Comforts Survivors of Pulse Massacre: “Their grief is beyond description,” Obama said after he and Vice President Joe Biden spent two hours at the Amway Center, meeting privately with people who lost loved ones in Sunday’s attack. “These families could be our families. In fact, they are our family. … And today the vice president and I told them, on behalf of the American people, that our hearts are broken, too.”

Unemployment numbers for Florida are released at 10 a.m. Friday.

♦ June 18: “ReVive,” a new show at Calypso Fine Art Gallery, opens at 6 p.m. with a reception. The show features Doreen Hardie a semi impressionist painter, Richlin Burnett-Ryan, an experimental expressionist, and Weldon Ryan a realistic painter. “This exhibit is a light-hearted visually stimulating excursion,” the Ryans say. “Come and get revived by nature.” 4601 E.Moody Blvd, Bunnell, Suite/Unit K12. In Marvin’s Garden Business Center Complex. For more information on this art exhibit or the gallery, please call (718)554-6180 or (386) 916-4438.
♦ June 20: National Park Service Volunteer Fair, from 5 to 7 p.m. in front of Castillo de San Marcos in St. Augustine. Meet experienced VIPs (Volunteers-In- Parks) from both sites, chat with them about what they do and why they love it, and get information on how you can Find Your Park and get involved. For more information about the parks, or to download our VIP Handbook, visit www.nps.gov/casa and www.nps.gov/foma.
♦ June 22: The Coastal Florida Benevolent Police Association hosts a candidate forum featuring all nine candidates for Flagler County sheriff, at the Portuguese-American Club, 1200 Palm Harbor Pkwy in Palm Coast. Doors open at 6:30 p.m., the forum begins at 7 p.m. All welcome.

♦ July 5: A pre-trial is scheduled at 1:30 p.m. before Circuit Judge Matthew Foxman in Courtroom 401 at the Flagler County Courthouse in the case of Joseph Bova II, the man accused of first-degree murder in the killing of Zuheily Roman Rosado in an execution-style shooting at the Mobil Mart on State Road 100 in Palm Coast in February 2013. Pre-trail hearings have been frequently continued, however. Bova has been held without bond at the Flagler County jail since May 11, 2015, when he returned from a state psychiatric hospital.

♦ July 7: U.S. Senate candidate Carlos Beruff, a Republican running for Marco Rubion’s seat, is be the guest speaker at the Flagler County Young Republicans Club meeting, which is open to the public. 7 p.m., Hilton Garden Inn, Palm Coast. Beruff, 58, is a Manatee County developer and major contributor to more than 100 political candidates since 2002, including a few Democrats, according to the Miami Herald.
♦ July 18: The trial of Anna Pehota, 77, who faces a second-degree murder charge over the alleged killing of her husband in the Hammock in September 2015, is scheduled to begin with jury selection.
♦ July 25: The Plantation Bay Utility Customers Community meets at 6 p.m. at Club de Bonmont, 300 Plantation Bay Drive, Ormond Beach.
♦ July 20: The Flagler League of Cities, a gathering of the county’s mayors, meets at noon at Flagler Beach City Hall.

I used an assault rifle in the Army. I don’t think civilians should own them. https://t.co/LaSGsbF0U0 via @nytmag pic.twitter.com/GQZ6gQJOnK

How the forces on the Internet dictate what we like and dislike: https://t.co/SMIqSUA0b6

This 13th-century doodle, long regarded as anti-Jewish, may have a more complicated meaning https://t.co/Ttc3tUnsCP pic.twitter.com/b9aPrmrO7R

Ben Webster and Oscar Peterson, Together, Live, in 1972