Today: Partly cloudy in the morning then becoming mostly cloudy. Areas of fog in the morning. Highs in the upper 70s inland…in the mid 70s coast. Southeast winds 10 to 15 mph. Tuesday Night: Partly cloudy. Patchy fog through the night. Lows in the mid 60s. Southeast winds 10 to 15 mph. Details here.
Today’s fire danger is moderate. Flagler County’s Drought Index is at 57.
Today’s tides: at the beaches, at the Intracoastal Waterway.
Today’s document from the National Archives.
The OED’s Word of the Day: novus homo, n..
The Live Community Calendar
Today’s jail bookings.

The Flagler County School Board meets in workshop at 5 p.m. and in a meeting at 6 p.m. At the workshop board members will discuss a resolution declaring the week of Aug. 15, when school starts, Pedestrian and Cyclist Safety Week. At the meeting, board members are expected to decide the fate of the Belle Terre Swim and Racquet Club.

Flagler County’s Centennial Committee meets at 1:30 p.m. in the first floor conference room of the Government Services Building, Bunnell. The committee will discuss finance options for the centennial, reviewing the budget for presentation to the county commission. 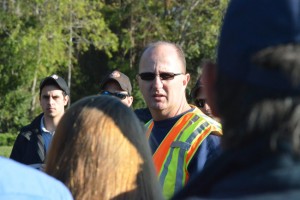 Celebrated Emergency Services Chief Kevin Guthrie Resigns, Jolting Commissioners: Money was not the issue, Guthrie, who earns $82,700 in Flagler, said. Nor has he closed all avenues of conversation, though it appears that no such conversations will be forthcoming from the county administration. “I’m always open to conversation,” Guthrie said in a brief interview, when asked if he’d made up his mind for good. “Money is not a motivating factor in my life. It’s more about us committing to process and policy and procedures and actually talking, getting feedback.”

Flagler Beach’s Lt. Cox, Among 10 Winners, Is Countywide Public Safety Person of the Year: Individuals were nominated by their peers and will have had to contribute to their service—and to services beyond their own—in a way that enhanced public safety of improved relations between agencies while maintaining high standards of conduct, ethics and capabilities.

Flagler’s first manatee death of 2016: A Fish and Wildlife Conservation Commission official told the Observer that “the mammal showed signs of cold stress syndrome. Manatees do best in water 68 degrees and higher. The ocean water temperature off Flagler Beach has been ranging between 57 and 61 degrees.”

The Senate will hold a floor session and could take up issues such as a proposal (SB 590), filed by Sen. Nancy Detert, R-Venice, that would let judges place the best interests of children in adoption cases above biological parents’ wishes. The Senate also could consider a proposal (SB 716), filed by Sen. Eleanor Sobel, D-Hollywood, that would lead to a Holocaust memorial being built in the Capitol complex. (10 a.m.)

Fees in Open Records Cases: The House Government Operations Appropriations Subcommittee will take up a proposal (HB 1021), filed by Rep. Greg Steube, R-Sarasota, that would give judges discretion in deciding whether to award attorney fees in public-records lawsuits. (10:30 a.m.)

Abortion: The House Health Care Appropriations Subcommittee will consider a wide-ranging bill (HB 1411), filed by Rep. Colleen Burton, R-Lakeland, that would increase regulations on abortion clinics and address issues such as a prohibition on the sale of fetal tissue. (10:30 a.m.)

FSU player’s death: Senate Minority Leader Arthenia Joyner, D-Tampa, Rep. Mia Jones, D-Jacksonville, and former Florida State University and NFL football players are expected to take part in a news conference to urge passage of a proposal (HB 3513 and SB 16) that would compensate the family of FSU player Devaughn Darling, who collapsed and died during a 2001 training session. (10:30 a.m.)

Charter schools: The Senate Education Pre-K-12 Committee will take up a series of measures, including a proposed constitutional amendment (SJR 976), filed by Sen. Kelli Stargel, R-Lakeland, that calls for creating a statewide system of approving charter schools. Currently, school districts receive applications for charter schools. If the applications are denied, backers of proposed schools can appeal to the state. (1:30 p.m.)

Lottery limits: The Senate Regulated Industries Committee will consider a bill (SB 790), filed by Sen. Tom Lee, R-Brandon, that would place limits on the sales of lottery scratch-off games. Under the proposal, the lottery could not offer more than 20 scratch-off games at a time, and tickets could not cost more than $5. (1:30 p.m.)

Gun bills: The House will hold a floor session and is slated to consider two high-profile gun bills. One of the bills (HB 163), filed by Rep. Matt Gaetz, R-Fort Walton Beach, would allow people with concealed-weapons licenses to openly carry firearms. The other bill (HB 4001), sponsored by Rep. Greg Steube, R-Sarasota, and Rep. Michelle Rehwinkel Vasilinda, D-Tallahassee, would allow people with concealed-weapons licenses to carry guns on college and university campuses.Â (4 p.m.)

The Florida Supreme Court will hear arguments in five cases, including an appeal by Cary MichaelÂ Lambrix, a Death Row inmate scheduled to be executed Feb. 11.Â The Lambrix arguments will focus, at least in part, on a U.S. Supreme Court decision this month that found Florida’s death-penalty sentencing system unconstitutional. The U.S. Supreme Court found that Florida’s system of allowing judges — not juries — to impose the death penalty violates the Sixth Amendment right to a trial by jury. (9 a.m.)

Donald Trump is the most popular Republican among Muslim Americans.

Margaret Talbot’s Profile of Bernie Sanders and the young voters who love him: https://t.co/UjFdWHgqab #TNYarchive pic.twitter.com/4p4ZMg6qlp

Photography, film, and the work of artists under the Soviet state https://t.co/lVyGVMSOsb pic.twitter.com/coXdYCEXDE

The following is an update of ongoing construction and development projects in Palm Coast, through Jan. 27:

County’s I-95 Interchange Matanzas Woods Reclaim Water, 76 percent done: Retention ponds are being excavated and fill continues for the ramps. (Not in the Dec. 15 update.)