Today: Patchy fog in the morning. Partly cloudy with a 20 percent chance of showers and thunderstorms. Highs in the upper 80s. East winds 5 to 10 mph. Tonight: Partly cloudy in the evening then clearing. Areas of fog after midnight. Lows in the lower 70s. South winds 5 mph. Details here.
Today’s document from the National Archives and the Astronomy Picture of the Day.
Today’s tides: at the beaches, at the Intracoastal Waterway.
Drought Index: 250
The OED’s Word of the Day: gaddi, n..
The Live Community Calendar
Today’s jail bookings.

“For The Nation is unique in American journalism for one thing: it is read by its enemies. They may damn it, they may have it barred from libraries, they may even–as they did during the war–try to have it put down by the Postoffice, but all the while thy read it. That is, the more intelligent of them–the least hopeless minority of them. It is to such minorities that the Nation addresses itself, on both sides of the fence. It has penetrated to the capital fact that they alone count–that the ideas sneaked into them today will begin to sweat out of the herd day after tomorrow.”

Today is a teacher work day in Flagler County schools. No school for students. 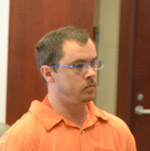 In Court: A jury trial is scheduled in the case of Jonathan Canales, who faces an attempted first-degree murder charge. He is accused of shooting his now-29-year-old ex-girlfriend in the neck in their Mondex trailer four years ago as the victim’s three children slept nearby. Canales has pleaded innocence, claiming Tiffany Norman shot herself. The trial begins with jury selection before Circuit Judge Terence Perkins in Courtroom 401 at 9 a.m. at the Flagler County courthouse. Assistant State Attorney Melissa Clark is prosecuting the case, Garry Wood is defending Canales. See background here. (2014CF000956) (Subject to change, as cases set for trial may be resolved before the first gavel.)

Panhandle Hurricane relief: Please help us fill the hurricane relief truck Monday at Winn Dixie.  To make a BIG difference we are adopting Wewahitchka Fl  A small town  of 2000 people obliterated . The WNZF truck will be at Winn Dixie on Palm Coast Pkwy Monday 9-6: Food, sanitary, cleaning supplies, tarps, bug spray any old fm radios and batteries!  FEMA has delivered bottled water, so that won’t be needed. These people need everything and anything is a big help.  Please share so we can fill truck and hit the road asap http://www.cityofwewahitchka.com/

The Flagler Tiger Bay Club hosts a Meet the Candidates dinner from 5:30 to 8 p.m. at the Hammock Beach Resort, 200 Ocean Crest Drive, Palm Coast. Both Congressional District 6 Candidates have been invited. Democrat Nancy Soderberg has confirmed her attendance. A Candidate Hob Nob will be held from 5:30 to 6:30 p.m. Ten local and state candidates will be available to meet personally and answer your questions. Flagler County Supervisor of Elections Katie Lenhart will provide an update and statistics from the primary election and upcoming deadlines and dates for the General Election. This event is open to the public at an admissions fee of $40 which includes all activities and dinner. Those interested in attending are asked to register on the club’s website at www.FlaglerTigerBayClub.com by clicking on the events tab. Any additional candidates interested in participating in the meet and greet are asked to contact Flagler Tiger Bay board member Lea Stokes 386-439-0134 or [email protected] to register. The fee is $100 for a table and $40 for dinner.

Palm Coast Road Closure through Oct. 15: The City of Palm Coast plans to temporarily close a section of Wellington Drive – from Village Circle (the Wellington/Village intersection farthest from Pine Lakes Parkway) to Lago Vista Place – beginning Monday, Oct. 1, and continuing through Oct. 15. This temporary road closure is necessitated by a City project to upgrade a utility pump station. This temporary road closure will be 24 hours a day during the project. Detours will be in place to help neighborhood residents and other motorists reach their destinations. For more information, call Customer Service at 386-986-2360.

SCOTT RECORDS DEBATED: The 1st District Court of Appeal will hear arguments in a public-records lawsuit about whether Gov. Rick Scott should be required to turn over his calendar to the AIDS Healthcare Foundation, which has been locked in a battle with the state about Medicaid contracts. Leon County Circuit Judge Charles Dodson ruled Sept. 5 that Scott was required to turn over his calendar — including information about fundraising events and where the governor will reside at night — to the group. Scott appealed, and the 1st District Court of Appeal said it would expedite the case. The AIDS Healthcare Foundation filed the lawsuit in July after the Scott administration did not provide the requested calendar information in response to a public-records request. The request was made after the state Agency for Health Care Administration did not renew a five-year Medicaid contract with the foundation’s subsidiary, Positive Healthcare, to provide Medicaid services in Broward, Miami-Dade and Monroe counties. The Scott administration and the Florida Department of Law Enforcement argued that releasing the information could jeopardize the governor’s safety, but Dodson disagreed, noting it “simply is information regarding the governor’s travel schedule.” (Monday, 2 p.m., 1st District Court of Appeal, 2000 Drayton Dr., Tallahassee.)

Here’s a summary of the latest city developments as of Oct. 11, 2018, with a link to the full week in review here.