In her six years as Flagler County Elections Supervisor, Kaiti Lenhart developed the kind of seamless, impartial operation and relationships with local municipalities, the county, political candidates, committees and voters of all stripes that immediately won her universal praise.

The governor had appointed Lenhart to the post in 2015 to replace her often noxious and ultimately criminal predecessor. In 2016 Lenhart won her first election with a crushing majority. She was unopposed this year. She got along with previous county and Palm Coast administrators even when they were embattled with everyone else. Until now she’d gotten along with all current administrations, too–in Flagler Beach, Bunnell, Palm Coast and the county, doing so with the kind of eternally optimistic and cheery disposition more often associated with Disney’s customer service reps than a constitutional officer navigating the high-stress tensions of electoral labyrinths, especially this season.

It took Flagler County Administrator Jerry Cameron to end that streak. What Jim Landon, Craig Coffey and Kimberle Weeks couldn’t do (Lenhart had worked in the office for years when Weeks was the supervisor), Cameron did this week, rattling and angering Lenhart to such a point that she abruptly ended a meeting with him Thursday after she’d “had enough” of his contempt.

“Say what you will about me, just don’t mess with my voters.”

As FlaglerLive first reported Friday, she’d gone to his office upset over his reversal of a pledge not to keep roads closed for construction around the Government Services Building during election weeks. She was hoping he’d change his mind or at least compromise. He did neither, instead speaking offensively about voters who can’t read signs.

“Say what you will about me, just don’t mess with my voters,” Lenhart wrote of the meeting in an email to Flagler County Commissioners this morning. (FlaglerLive obtained the email independently of Lenhart, who did not share it with the site. But she authenticated it when asked.) “I take this contempt very personally and as a public servant, I am ashamed that anyone in a position of authority in this county would have such a negative attitude and zero compassion for those whom they are supposed to serve.”

Lenhart alluded to Cameron’s apparent deception, as he reversed a pledge not to carry out the $730,000 construction project upending the Government Services Complex’s grounds during election weeks, then as he displayed contempt for voters and for Lenhart herself when she pleaded her case that construction should be suspended and roads reopened at least for the two weeks of early voting and through Election Day.

“I must share that I am outraged that our County Administrator did not plan this project around a Presidential Election cycle from the beginning, as he said he would do at our meeting in August,” Lenhart wrote the commissioners.


“Now,” she said of Cameron, “he has stated it will cost $18,000 to suspend construction and open the road–only because of his poor planning. The construction contract should have been made with a pause during early voting and Election Day as part of the terms of agreement. Now that the election is apparently an afterthought, thousands of early voters will be forced to navigate around the courthouse and maneuver the tight curve through our back parking lot. It is not a safe and direct route to our office. Will voters find their way through the detour? Of course they will, but that’s not the point. If I had known sooner that the construction would not be halted, I would have had the time to inform the public. Now we have lost that precious time. This entire situation could have been avoided, clear and meaningful communication regarding the plan should have been shared from the beginning.”

The elections office has been receiving numerous complaints about the construction.

“I have always had a great working relationship with the county and their staff and I was under the impression that we were all working together to make this historic election the best voting experience possible for the people of Flagler County,” Lenhart wrote the commissioners. “Unfortunately, I learned on Thursday that the County Administrator and I do not have the same priorities. Not only was I told that the construction project would not be suspended, Jerry actually said that if voters can’t figure out the detour, they shouldn’t be voting. He wants the project completed on time, before he leaves. After a few more disrespectful comments, I said that I’d had enough and got up and left his office. He should know me better than that.”

The county commission approved the bid for the project in mid-July, a full two and a half months after the bids were received. (The bid went to S.E. Cline.) The project will result in the addition of 62 regular parking spaces. Meanwhile it’s closed the access road to the Government Services Building and the Supervisor of Elections Office, requiring drivers to loop around the courthouse, assuming they notice the meager “detour” sign posted at the main entrance into the complex, with no others signage about elections or the supervisor’s ballot drop-box, though a record number of voters are voting by mail. (By early this week, more people had voted by mail in Flagler than had voted by mail in the entire election in 2016.)

Construction began on Sept. 25. “This is a long overdue project, and the county took the first viable opportunity to address the severe lack of parking at the GSB,” County spokesperson Julie Murphy said in an email. The Government Services Complex has gone without the extra parking for 15 years. Nothing stopped the county from delaying the start of construction for barely six weeks, until after Nov. 3. Instead, in an election season riven by mistrust, allegations (and evidence) of voter suppression efforts and an unusually tense election season that’s drawn calls by the sheriff and the supervisor for calm, Cameron–an arch-conservative tied to the Republican Party in St. Johns–appears to have needlessly fueled discord and at least appearances of suppression with a decision that could have been mitigated, had he stuck to his original pledge to Lenhart.

“I am one of the citizens who called to complain about the confusing entrance to the SOE’s office because I have received numerous calls from my constituents complaining about this very confusing situation,” Mike Cocchiola, who heads Flagler’s Democratic Party, wrote commissioners in an email, asking them to overrule Cameron. “I’m a frequent visitor to the GSB and the SOE’s office and I had to drive around a bit to figure it out. There were no signs at all. Now there’s maybe one? Should elderly or impaired residents who may become confused by the lack of directions be disqualified from voting ‘if they can’t understand the detour’?” Cocchiola concluded: “This is not the time to discourage voters, but to ensure they get to cast their votes unimpeded by the county administrator and his regrettable lack of empathy for this most important of our democratic processes.”

In an email to Lenhart after their meeting, Cameron claimed that the county was taking “extraordinary” measures to make voting “more convenient than ever,” even though the county had nothing more than install a few detour signs the entirety of the construction period that had coincided with mail ballot drop-offs until then. He also falsely claimed voters would have to drive “approximately the same distance” to vote–a claim shown to be false by an image of the complex his own PR office posted Saturday, showing the distance around the complex that drivers would have to travel to get to their destination.

Schematic drawings of maps with red lines are not usually necessary to point individuals in the right direction if access is presumed to be “more convenient than ever,” but that’s what the county posted Friday above a happy-faced statement claiming there will be a “smooth voting process” at the GSB despite construction. The map, published below, may make more sense to people familiar with the complex than for those who might go there only once every few years.

The county is offering “accommodations” that include electronic and directional signs, while the county “offered to hire people to direct traffic during voting hours.”


“These accommodations were offered during early discussions of the multi-month project to increase parking,” Cameron–who did not respond to a text asking him about today’s email by the supervisor–is quoted as saying in the PR release. “They have been available all along to the Supervisor of Elections office, and we are happy to support them now.”

None of those accommodations were in evidence in the weeks of mail-in balloting. And Cameron’s version of events was at odds with Lenhart’s, who’d been assured that construction would be suspended during election weeks, making Cameron’s  “offer” unnecessary.

“It pains me greatly to have any negative press associated with this election and especially for our county government during a fragile and emotional time leading up to Election Day,” Lenhart said, concluding her email. “We live in an incredible community and there are many, many people working hard towards the success of Flagler County, in all of our public agencies. I believe this poor attitude is the exception and it does not reflect the dedication and integrity of the vast majority of our local public officials and their staff.  I have a tremendous responsibility to conduct secure, accurate and fair elections. It’s a team effort, I can’t do it alone.”
Lenhart is hoping the county commission will take action to suspend construction when it meets on Monday. Commission Chairman Dave Sullivan told FlaglerLive on Friday that it was out of his hands, and that Cameron “takes full responsibility.” Cameron–whose contempt for public, press and at times facts is nothing new, though disrespect for an elected constitutional officer is–is known among colleagues and commissioners usually to dig his heels when challenged. Commissioners have been happy to defer. 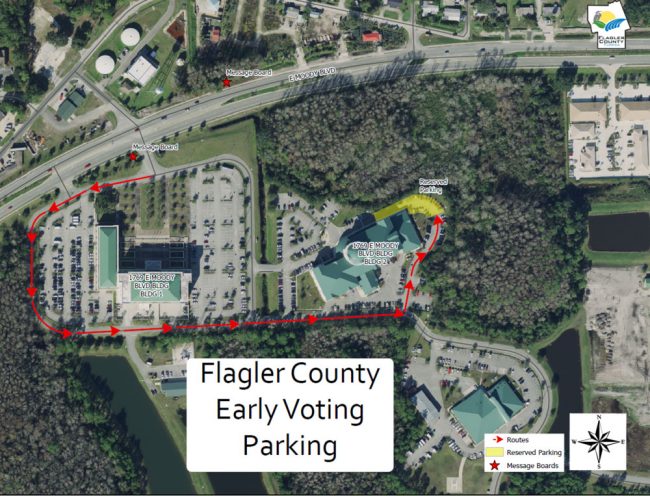