This series is a re-reading of John Updike’s short stories in the wake of the publication of “The Collected Early Stories” and “The Collected Later Stories,” the twin-volume set by the Library of America (2013), edited by Christopher Carduff. Updike wrote some 230 stories in five and a half decades. The commentaries include the Maple and Bech stories, most of which are excluded from the Library of America edition in anticipation of a subsequent volume collecting those. Contact the editor for questions, debates or corrections. A hyperlinked list of the compete stories appears below.

[Written in late 1974, “Augustine’s Concubine” is the first story John Updike wrote after leaving his wife, then Ipswich, and moving into an apartment in Boston’s Back Bay for 20 months. The New Yorker declined the story. It was published in the April 1975 issue of The Atlantic, collected in Problems, The Early Stories, and the Library of America’s Collected Early Stories.]

Interspersed with quotes from Augustine’s Confessions, the story has one foot in Updike’s theological canon and another in the experimental, resulting in an effort more impressive for its parts than its whole. It’s the story of Augustine’s years with his concubine, then his conversion and escape, or abandonment, thus tracing in rough outline Updike’s own progression from marriage to adultery to, one assumes, sainthood despite what he inflicts along the way.

“She led him to love him with a fury that scourged his young body,” the narrator writes of the concubine, back when he had the reputation of “a rake,” back when his carousing was his chief concern. She was married but the husband is edged out of existence. They have a son, Aurelius. “He wished she would die,” a line that echoes with the terrible line in “Wife-wooing“: “In the morning you are ugly.” The concubinage cannot last: he is married, she leaves for Africa never to return, leaving him their son.

“She was a saint,” the story concludes, “whose name we do not know. For a thousand years, men would endeavor to hate the flesh, because of her.” It’s not quite clear whether, despite his canonization of the concubine, Updike admires or reproves her. He did not hate the flesh. But he lusted after a sort of spiritualism that Augustine embodied. 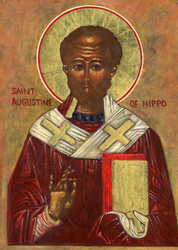 Augustine’s quotes dress up the story in an importance it does not deserve or live up to, just as the story’s ambiguities are more evasive than searching. Updike seems to be sermonizing the reader through Augustine. You can forgive the lack of purpose. There should be no purpose in fiction, no agenda. But you can’t forgive the lack of clarity. And there is something almost obscenely self-referential, once one learns of the nearly identical circumstances of Updike’s life around then–his betrayal, his exile, his narcissistic self-justifications–in the penultimate paragraph: “It was as if her dynamic and egocentric lover, whom she had never failed to satisfy, in his rejection of her had himself failed, and been himself rejected, even as his verbal storms swept the Mediterranean and transformed orthodoxy.”

It’s rarely fair to impose on a writer the realities of the writer’s life outside the fiction created, but Updike profited so much from his circumstances that he gives up the right to that sort of privacy. He lowered the shield. When a story doesn’t work, the creaking reality of his life emerges the stronger, less admirably, infecting the text. Scurrying behind St. Augustine’s robes was not a good idea.