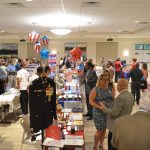 The News-Journal has defended Danielle Anderson’s dual roles as a correspondent and as president of the Flagler County Republican Club by saying she does not cover political stories. But last week she covered Sen. Rick Scott’s visit to Flagler, without a disclaimer.

A complaint alleges that Frank Meeker, the Palm Coast council member running for county commission, is violating the Hatch Act, which prohibits employees of any agency receiving federal dollars from running for office. Meeker works for the St. Johns River Water Management District, which gets 0.4 percent of its revenue from the federal government.

John Pollinger, a Democrat in New Jersey until his move to Palm Coast, blames a small cabal of local Republicans for attempting to derail his candidacy for Flagler County Sheriff, but Florida law appears to support the claim that his previous registration disqualified his bid as a Republican.

Just 10,825 Flagler Republicans turned out to vote in Tuesday’s primary, for a 43 percent turnout, compared to a 53 percent turnout in 2008. The drop across the state was steeper, adding to Republican anxieties about having the numbers to take back the White House in November.