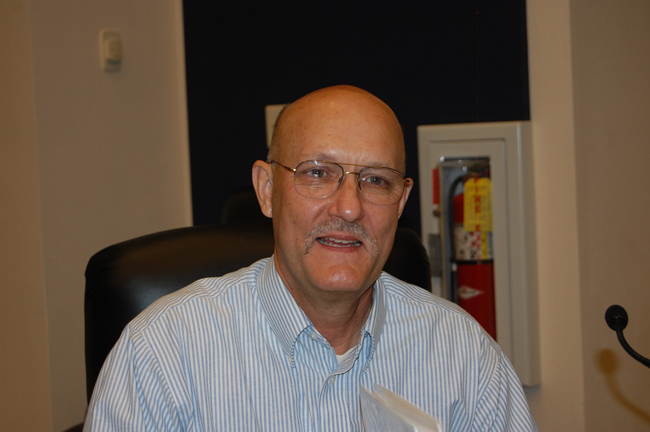 The second and last time Bunnell City Commissioner Elbert Tucker tried merely to hear a proposal from the Flagler County Sheriff to take over policing in the city, the occasion devolved into an ambush.

Tucker had invited sheriff’s officials to make a presentation outlining the savings possible through consolidation. No sooner were the Sheriff’s Office’s Linda Bolante and then-Maj. Steve Clair done did a stream of individuals–most of them recruited for the occasion by the late Arthur Jones, the police chief at the time, and Armando Martinez, the city manager at the time, and almost all of them from Palm Coast, not Bunnell—walk up to the dais to tell commissioners what a wonderful job Jones was doing, what an asset the police department was, what it represented to Bunnell’s sense of identity, and how foolish it would be to let the sheriff take over. Savings were not much of a concern, though the sheriff was proposing to save the city 26 percent on its policing bills.

After the meeting, Jones, Martinez and their supporters, including a majority of the city commission that included Mayor Catherine Robinson, Jenny Crain-Brady and Daisy Henry, congratulated each other as if an election had been won. There never was a vote on the issue: there couldn’t have been at that particular meeting, which was a workshop (where votes may not be taken), but the matter was not brought up again in a commission meeting.

The complexion of the Bunnell City Commission has changed. So has its administration. Back-slapping though Martinez was with Jones at that meeting in 2010, Martinez eventually pushed out Jones in 2012 and replaced him with Jeff Hoffman, though Hoffman didn’t stay more than 18 months: he’s now the chief deputy for the sheriff (and on Wednesday, he was having lunch with one of the four finalists for the now-vacant police chief’s job in Bunnell). Martinez is gone, fired by a commission with two new members since that 2010 meeting.

It was always a matter of time before Tucker would try his consolidation proposal again. This week, he looked like he was about to: an item appeared on the agenda for next week’s Bunnell commission meeting that read: “Discuss the Feasibility of the Flagler County Sheriff’s Office taking over the City Police Department – Commissioner Tucker.”

No sooner was the item posted than it was red-lined. Tucker pulled it—not because the item had immediately provoked the creation of a Facebook page called Save the Bunnell Police Department, but because, Tucker said, “I just didn’t have all my ducks in a row.” The Facebook page had garnered 160 likes by Wednesday evening.

But he will, he says. “It’s just a matter of time. I’ll bring it back. There’s no doubt. So they need to keep their Facebook page up,” Tucker said on Wednesday.

He’s been working on the idea for four months. He’s had discussions with a sheriff’s official about it—though not with Sheriff Jim Manfre. Tucker could not remember who the official was: he’s no longer with the sheriff’s office. And though he has a bottom-line figure that he says sums up the potential savings for Bunnell, in case of consolidation, Tucker said he’s not ready to disclose it yet.

“I’m not going to tell you what the price was, it’s less than what we’re paying, but that’s all I’m going to say,” Tucker said.  “The police department costs Bunnell a little over $1 million a year.  If you think about how much money the proposed refurbishment of the old courthouse, or a floor on the annex, is going to be—in excess of $1 million per floor: where are we going to get the money? If we can save money on one to spend on the other, I think it would be a good trade-off.”

The county just ceded the old courthouse, including the courthouse annex, to Bunnell, which intends to use it as its new city hall, but also to lease portions of the rest of the building to non-profits or other entities. The city secured a $1.2 million loan to help pay for the repairs, which may run upward of $5 million for the entire building.

Asked about the issue on Wednesday, Manfre raised both hands and said he was not at all involved. He repeated what he’d said on the matter before: if a majority of the city commission were to request the sheriff’s services, he would follow those wishes. But he won’t seek them out.

Tucker may have a harder time getting his fellow commissioners to go along. He says he is certain not to get the support of Mayor Catherine Robinson and Commissioner Jenny Crain-Brady, who have rallied around the police department before. He would be relying on support from newer commissioners: John Rogers and Bill Baxley. Tucker does not want a repeat of 2010. He said before going so far as to seek out a presentation from the sheriff, he would first want to discuss the possibility with his fellow commissioners and be assured of a majority that would at least agree to discuss the issue.

But even Rogers, who had shown interest in consolidation in the past, but not since becoming commissioner, was distancing himself from the proposal on Wednesday, though he was not aware that Tucker had pulled it from the agenda.

“I would listen to what he has to say but I think the police department is a valuable asset to the city of Bunnell,” Rogers said. “But I’d never want to close the door if any of my fellow commissioners want to discuss anything.” Asked directly about the notion of consolidation, Rogers said: “I would have to look at the figures. But I know there’s a vast majority of citizens of Bunnell who like to have their own police department.” That attachment may override the cost savings, Rogers said, since the citizens are ultimately paying for their police department.

To press the point, Rogers pointed to an email sent commissioners today from JoAnn Noel, an administrative assistant at the Bunnell Police Department, that, Rogers said, illustrates the value of the department–and the rapid response, beyond Facebook, from those already campaigning to protect the department.

Rogers is running for re-election in March, as is Crain-Brady. It will be a close election. It is unlikely that either of them would take a position against the police department. Without Rogers’s vote, Tucker’s initiative may be stillborn.