Carla Cline was getting tired of the self-absorption surrounding the covid pandemic, the way people “are just thinking of themselves, they are not thinking about the whole bigger picture and being kind and looking out for each other,” she said. Support for what matters, for those who matter, has “gotten drowned out by just the nonsense of life.”

“I was just getting frustrated and angry and sad,” the Flagler Beach resident known for launching big and very effective philanthropic efforts. “I’ve had two friends that have had to go to the hospital with Covid. And then I had a friend who had an unrelated Covid situation, that should have been admitted to the hospital, but because there was no room, he was released. And then I was thinking just about the nurses having to send people home who are really sick, and what they must be going through.” AdventHealth Palm Coast’s covid-related admissions have been above 90 for the past week, in a hospital licensed for just 132 beds.

So Cline, who a year ago raised $40,000 in 40 hours in a dune-restoration drive, devised her newest campaign: to raise 1,000 gift cards worth $20 each from local restaurants that will then be distributed to AdventHealth Palm Coast’s 1,000 employees at every level. Willing participants would go to their favorite restaurant–any restaurant anywhere in Flagler, Palm Coast, Flagler Beach, Bunnell–buy the card (or cards), draft a kind note, and turn them in at any one of four locations (see them listed below.) Cline will collect them and deliver them in batches to the hospital. One such delivery is scheduled for Monday, since she has already raised about 500.

Several restaurants, among them Woody’s BBQ, Southern Table, Turtle Shack, Tortugas, all matched the number of cards bought there, Romero’s Tuscany By the Sea created a contest with its staff to sell gift cards to clients, netting 50 additional cards, Snack Jacks outright donated 18 cards, and Si Como No, the Inn at the north end of Flagler Beach on the sea, is donating 15 two-night stays. This is not an exhaustive list: the matchers and donors are piling up quickly. Intracoastal Bank, one of the drop-off sites, suggested broadening the campaign to include nurses working at sites other than at the hospital, the nurses working in Flagler schools, and elsewhere. Cline is open to all the suggestions, which–as happens with her fundraisers–tend to take on a life of their own, matching and exceeding her goal quite rapidly.”I felt like they needed people to know that we care about them and we’re sorry,” Cline said. “They’re like in a war right now, and they need to know that people care about them. It was a way to channel my anger, sadness, frustration into something positive and it was like, instead of being upset, I was like–okay I’ll just help people that really need it right now.”

Cline spoke of her “heavy heart” in a video on her Facebook page on Monday, where she explained to what and why she was focusing her energy on the gift-card drive “for all the nurses and hospital support staff who are just getting their asses kicked, not just working long hours, but working long hours dealing with people who are sick, who are dying, and who are scared, and who may never see her families again.” Her voice broke at that point, before she explained the mechanics of the drive.

Cline’s social media platform reaches a lot of people, and those people share her posts with everyone they know. “It’s definitely a group effort,” Cline said. “I’ve had a ton of people I’ve never met before coming in and saying we saw your post and we want to participate. And then I have a good friend who lives in Orlando, she was a local here for a long time. Her dad actually used to own LaBella Pizzeria. She’s in Orlando. She’s starting one in her community, and then I’ve had two other people reach out to me that they’re starting a similar project in their communities for their local hospital as well. So that is equally amazing.”

The $20 figure was picked because it’s an easy number to remember, it’s a meaningful gesture to the health care workers–as meaningful to a surgeon making six figures or more as it would be to a nurse, a clinical assistant, a dietician, a patient services assistant, and so on.

“It’s not who makes the most,” Cline said, “this is a morale issue.” And all health care workers are dealing with the ordeals in one way or another.

To get in touch with Carla Cline, message her through Facebook or email her at [email protected]. 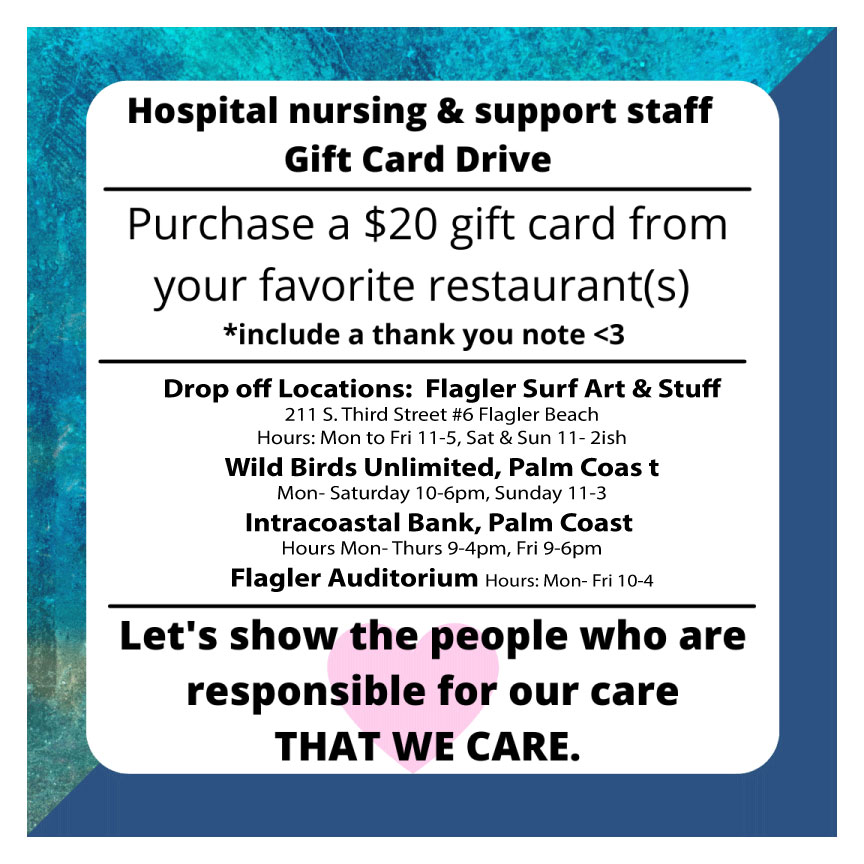