The Help Save Flagler Beach GoFundMe page is here.

Flagler Beach residents are not giving up.

In a display of ingenuity that appears to have no precedent, two Flagler Beach residents–Carla Cline and Craig Atack–devised a crowdfunding call to quickly raise $40,000 and parcel the money out among 11 property owners who have so far refused to sign easements. The easements would allow the U.S. Army Corps of Engineers to renourish the beach by building new dunes, a project 15 years in the works.

The property owners’ refusal to sign is jeopardizing the viability of the project.

Less than a week before the Corps may decide whether to kill the project, Cline hopes the money will entice the property owners to sign and save the renourishment plan. The Flagler Beach City Commission, the County Commission, many property and business owners and residents of Flagler Beach see new dunes as vital to saving the beach itself, to prolong the life of State Road A1A against rising seas and intensifying storms and preserve the artery fueling the city’s tourism economy.

The fund-raising call went out late Wednesday night but wasn’t disseminated on social media until Thursday morning. In an astounding show of support from more than 300 donors, they raised $40,000 in 40 hours, quickly exceeding their $40,000 goal by early afternoon today. Contributions have poured in from the city, from the county and beyond as many people who used to live in Flagler Beach or who vacation there have been contributing.

Here’s another remarkable fact, as humbling as it should be to politicians as it is reflective of the importance of the beach to the fund-raising’s grassroots advocates: the amount, raised in less than 48 hours, is $10,000 more than all the cash donations combined to all 11 candidates running for two Palm Coast City Council seats and the mayor’s seat in the Aug. 18 election, and was generated from more than twice as many contributors than all 11 political candidates candidates have garnered, though some of those candidates have been at it for a year in a city with 18 times the population of Flagler Beach.

Whether the effort is ultimately successful or not, it illustrates an enormous commitment to it by Flagler Beach and may help convince the Corps to keep the project alive, says Al Hadeed, the county attorney who’s led the easement campaign all year. He’s staying out of the crowdfunding effort entirely, since it’s a private initiative, but says “this is warming my heart.”

Hadeed says he “absolutely” applauds the initiative because “one of our desires was to educate the owners and the broader population and stakeholders. The success of the project really does depend on broad-based community support, broad-based community consensus. Not just the initiation of the mechanics of putting together a project and the funding.” He said illustrating that community support “in my view is incredibly important to the success of the project.”

Atack, an attorney, and Cline, who runs flaglersurf.com and has embraced or led numerous community initiatives over the years, both have deep roots in Flagler Beach.

“Craig Atack and I were just texting back and forth several weeks ago,” Cline said. “It was essentially his idea in the sense that maybe we should start a GoFundMe and pay these clowns, was his word, and I dismissed it because I was so angry to have to pay people for being jerks. But then I thought oh, my gosh, this could work. We could raise the money, pay these people and be done with it.”

“We grew up here, we care about the place, we were just really upset about the whole thing and brainstorming,” Atack said this morning. He recalled how, years ago, the possibility that High Tides at Snack Jack restaurant would not reopen after its foundations were severely damaged by Hurricane Jeanne in 2004. The five-month closure provoked a national email campaign, with the restaurant posting the emails on its website, which helped keep the restaurant in business, as its owners had hoped all along. It’s still there. “I thought the same sort of effort could happen,” Atack said of the crowdfunding effort. “You’d hope being part of the community would be a reward in itself, but if people need a different kind of reward to take to the bank, then–”

Dennis Bayer, the Flagler Beach attorney whose office overlooks a segment of the beach in the Corps project, and himself a long-time advocate for environmental concerns, set up an escrow account for the funds, ensuring strict regulation and accountability. He said he’s handled land sales over the past few years of parcels similar to the ones in question, with prices ranging between $4,000 and $6,000.

The offer to be tendered to the hold-outs: about $4,000 each, in exchange for nothing more than to sign easements, not deeds.

It’s a lot to pay for a signature. But those supporting the initiative see too much at stake and too much to lose, starting with millions of dollars to repair the beach and possibly extending to a lost beach in coming years, with coming storms, if nothing is done.

The $25.5 project to build ample and storm-resistant dunes along 2.6 miles of beach on the south side of Flagler Beach is paid for, all with state and federal dollars. The money is in the bank. The U.S. Army Corps of Engineers is poised to bid out the contract. The dune-rebuilding project could be done by late this year or early next year. County government has managed the administrative effort, securing 128 easements from owners along the 2.6 miles.

But the 11 property owners accounting for 12 easements have held out again and again. (A few may currently be trending toward signing.)  Without them signing the easements (or without most of them doing so), the Army Corps will not go forward. The project will die. The $25 million will be returned to the federal and state governments.

“These 11 or 12 people can literally, literally undermine this whole project,” Atack said, and it would be “dead in the water,” as County Administrator Jerry Cameron put it to the county commission a few weeks ago.

Eight of the owners are represented by John LeRoux, a Clearwater eminent domain attorney. LaRoux did not return a call today. Cline in early afternoon said on her Facebook page Bayer had been in contact with him, though in an interview earlier in the morning Bayer had said he’d not been involved with that side of the effort. “Hope springs eternal,” he said. “I would think it’s in the best interest of the community that a resolution would be reached.”

The Army Corps had set out many deadlines for the easements to be signed, allowing each to lapse in turn. But Aug. 19 may be a drop-dead deadline. That day, the Corps and the county will meet and the Corps may decide the fate of the project then.

Then again, it may see the combined recent efforts by the county, which may be close to convincing at least a few property owners to sign, and that of the crowdfunding initiative, as too much to counter with a kill.

Cline had initially resisted the idea of paying off the property owners because she worried that other property owners who have signed would be displeased, since they signed without money. And the county said all along that it would not put money toward the signature. But Cline soon found that most property owners welcomed the approach. The message she heard was, as she described it: “For the most part, no, we prefer to have our beach, it’s not about money, it’s about the safety of our homes and our beach.”

Carol and her husband Jeff Fisher are among the property owners who signed an easement, who have owned a business on A1A, who own a home there, and who have been personally involved in trying to sway other property owners to sign.

“There are about 10 of us locals that have been discussing this for weeks/months,” Carol Fisher said this morning. “Several of us signed the agreement months ago,  never wanting compensation.  But there might be some greedy ones that think this is unfair.  Personally, to protect my beach, enhance my property, for zero dollars to me– it was a no brainer. I really think that a lot of these property owners were not informed,  because they threw away their mail, and didn’t go to any of the meetings.  Some, not all are just greedy.” The Fishers had thrown away the letter they’d received from LaRoux.

Doris Martin, a Flagler Beach resident, had initially been of two minds about Cline’s approach.  “I spoke about this with friends,” Martin said. “Some were for the project, some against, stating to let Mother Nature take her course, and their concern about the safety of sea turtles. The tide turned when a friend directed me to the video Carla Cline posted to Facebook. Carla is a Flagler Beach staple. I believe she is real, compassionate and–even though I don’t know her personally–has Flagler Beach’s best interests in mind. She sold me. Some of my friends who were denying the cause now support it. I decided to support it too.”

Jane Mealy, who chairs the Flagler Beach City Commission, was also thrilled by the crowdfunding idea, but with caveats. “I’m not in favor of, quote, bribing these people, but I think it’s wonderful that the whole community pulled together like that,” Mealy said. “I think Carla Cline and all the rest that are behind this shows where their hearts are, the community has really put a lot of effort in this, whether it’s this fund-raiser or talking to people.”

Nevertheless, Mealy said she was “not convinced” that the property owners will go for it. She said some of the hold-outs were not necessarily grasping for dollars so much as objecting to the language in the easement document, even after the county attempted to ease their fears: some worry that the dunes will block their view, for example. It will not do so. “It would be pretty sad if it were–if it did come down to greed,” Mealy said. “I think that would be sad. I’d be happy if they signed and then we could do the project, but it would be sad if it was greed all along.”

The money has kept coming into the crowdfunding coffers at the same rapid clip as it has since Thursday morning, growing by some $2,000 even since this article’s first paragraph was first composed. The amount now stands at close to $42,000, from 330 donors.

“This community is so amazing,” Cline said. “I didn’t think it was impossible. Now, to be that quick, with so small of an amount of people, yes. There’s people on there that have donated a good amount of money that have actually signed waivers, so not only are they owners of the land but they’ve given money. That shows a lot. What really warms my heart is seeing people I haven’t seen in a really long time–like 20 years–names are coming up that are donating, like you’ve lived here, you’ve moved, it’s just amazing. People love this place.” 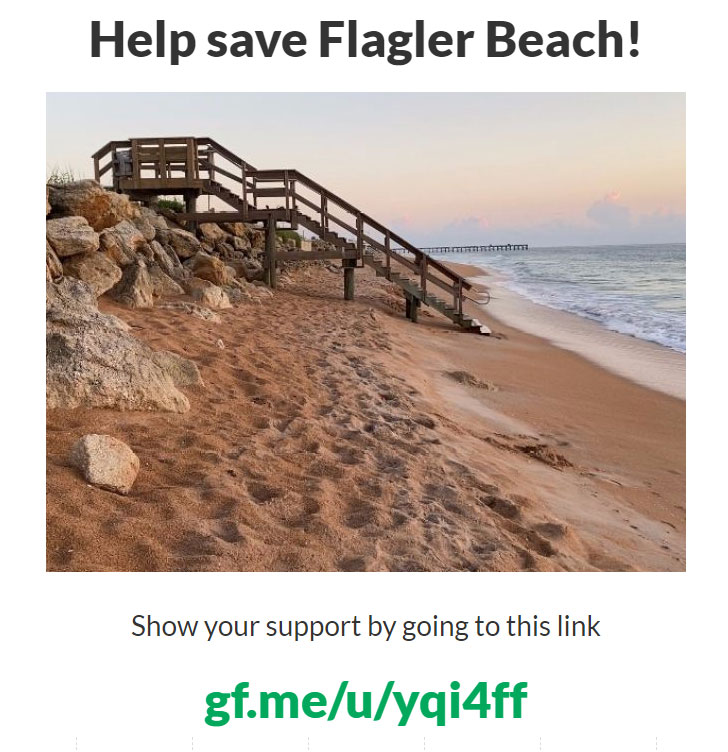