No, the coronavirus pandemic is not over, nor can it be downgraded to an epidemic. Flagler County in the last two weeks experienced yet another spike, as has Central Florida, that local and regional physicians and public health officials are attributing to Bike Week and Spring Break.

But it’s not just a regional problem. Cases are rising again nationally, led by Florida and New York. For the past 14 days, Florida, where Gov. Ron DeSantis has resisted covid-related restrictions, has had the second-highest daily average of new cases in the nation after New York, with over 5,000 cases a day. In Flagler, after a drop to a weekly total of 121 cases in mid-March, the lowest total since mid-November, totals rose again to 160 the following week, and 173 last week. Flagler since the beginning of the pandemic has managed to have the lowest case load by population. But in the last seven days, Flagler’s case load has vaulted the county to 27th in the state, not a place the county has been accustomed to.

“We’re at that crossroad of getting people vaccinated, but also we’re seeing more letting down, people not adhering to the safety measures of social distancing and face masking, so we had that potential of an increase with these types of activities, these large-crowd gatherings, not wearing masks,” Tim Hendrix, the medical director of AdventHealth CentraCare, said last week. “I am very worried when I see the video of people on beaches, especially in South Florida. Interesting, this last weekend, we got data on the distribution of variants in Florida, and the B117 or the UK variant, it’s estimated about 40 percent I believe of infections are possibly due to the UK variant already in Florida. That has a potential to be more infections. But the data we got this weekend was that the majority of these cases are in counties in South Florida, where a lot of this spring break activity is going on.”

Locally, Bob Snyder, the director of the Flagler County Health Department, said the spike was attributable to “the impact of Bike Week and Bike Week activities, maybe some folks letting their guard down with mask-wearing. We don’t see any significant outbreaks in the community at the moment, whether it’s long term care facilities or other congregate places.” In other words, there aren’t specific clusters of infections.


“When I first started at CDC about 2 months ago, I made a promise to you: I would tell you the truth even if it was not the news we wanted to hear. Now is one of those times when I have to share the truth, and I have to hope and trust you will listen,” she said. “I’m going to pause here, I’m going to lose the script, and I’m going to reflect on the recurring feeling I have of impending doom.” For all the reasons for hope, “right now I’m scared,” Walensky said in a Zoomed appearance. She described the difficulties of being in the trenches as a health care provider. “We have come such a long way. Three historic scientific-breakthrough vaccines, and we are rolling them out so very fast. So I’m speaking today not necessarily as your CDC director, not only as your CDC director, but as a wife, as a mother, as a daughter, to ask you to just please hold on a little while longer. I so badly want to be done. I know you all so badly want to be done. We are just almost there, but not quite yet.”

Looked at from the perspective of the last three months, Central Florida’s numbers may seem like a plateau. But it’s no less “worrisome,” Hendrix said, “because it hasn’t continued to decline. If you look at that 300,” the number of current hospitalizations in the entire central florida network of AdventHealth hospitals, “that’s about where we were back in the fall, after the summer surge, but then we went back up in the wintertime. So we’re worried that this has a potential to increase.” 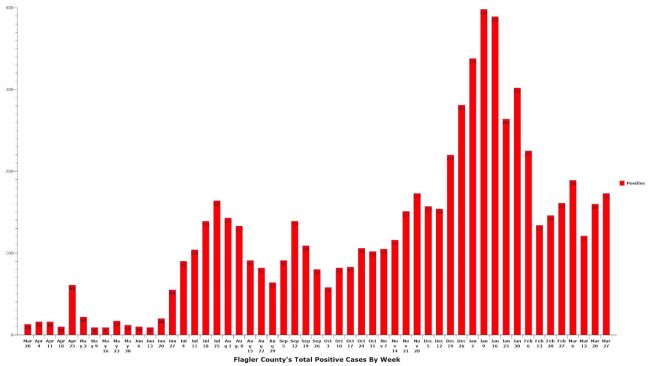 On the more encouraging side of the equation, and although hospitalizations and deaths lag by a few weeks, the current spike is generally affecting younger people, which should mean that hospitalizations and deaths will be less pronounced. “We can expect going forward less hospitalizations and less deaths because of our progress in getting the highest risk age group vaccinated, and that’s people over the age of 65,” Bob Snyder, who heads Flagler County’s Health Department, a state agency, said. “Now, because emergency room visits for covid-like illnesses have spiked and we’re seeing the spike in cases, that has resulted in more hospitalizations.”

Covid-related hospitalizations at AdventHealth Palm Coast had fallen to just 8 on March 18, from a high of 35 in mid-January. They’d risen back up to 16 and 15 over four days last week, and have since fallen back down to 12 for the past two days. Emergency room visits related to covid-like symptoms are trending slightly up according to the latest figures released by the state health department, last updated on March 21.

“Whenever we have an event, holidays, get together, anything of that nature, the cases go up,” Dr. Paul Mucciolo, who heads the emergency department at AdventHealth Palm Coast, said. “The immunizations are out now, but we don’t have enough of the population [inoculated] to curtail that.” But, he added, “The severity of the cases has gone down and we’re happy to see that, and the number of cases has gone down.”


“We are still seeing some younger folks with covid and covid-related illness,” Mucciolo continued. “The severity of the disease has gone down because we have other therapies we can use now to keep them out of the hospital,” including monoclonal infusions, an outpatient antibody infusion that interrupts the spread of the disease in the body. Not a single patient given those therapies has been admitted back to the hospital, the doctor said.

The worry about variants is out there, but the variants themselves appear to still be in check locally. “Thankfully the valiant has not taken hold yet in Flagler County, we still have wo variant cases, that number, two, has remained for the last six weeks, it’s eight in Volusia County,” Snyder said, citing the actual numbers of covid infections attributed to the more infectious variant seen in South Florida. “It’s almost like a marathon race against time,” Snyder said, with vaccinations on one hand and the looming variant potentially spreading on the other.

For those reasons, Mucciolo said, covid fatigue should not translate to abandoning safety measures. “We don’t have room for complacency like that,” he said. “We don’t, because there are people out there who haven’t been vaccinated, there are people who don’t respond to vaccines, and we can’t jeopardize those people with capricious [behavior] like that. I implore everyone to really be careful with this.”

Meanwhile the vaccination front continues to brighten rapidly. Nationally, almost a third of the population–29 percent–has had at least one shot of the vaccine, and 16 percent have completed their shots. More dramatically, 72 percent of those 65 and older have received at least one shot.

In Flagler as of Sunday, 37,580 people had received at least one shot, which would equate to 33 percent of the population–39 percent of the adult population (children are not being vaccinated). Flagler has 36,455 people 65 and over, according to the latest Census figures. Of those, 26,287, or 72 percent, have received at least one shot, and 17,951, or 49.2 percent, have received both shots.

A total of 8.6 million doses have been administered statewide.

The nation was inoculating just under 200,000 people per day in late December. The seven-day average was up to 900,000 a day by Jan. 20. It is now 2.76 million per day and still climbing. At the current pace, half the population of the United States will be vaccinated with at least one dose by May 9, 70 percent by June 16, and 90 percent by July 24.

As of today, 96 Flagler County residents have died of the disease, 360 have been hospitalized, and 6,540 have been confirmed to have been infected. The actual number of infections is significantly higher, health department officials estimate.