Flagler County Sheriff Rick Staly and State Attorney R.J. Larizza this afternoon held a brief, live-streamed press conference to announce the arrests or issuance of arrest warrants for 27 individuals, most of them accused of selling drugs–cocaine, fentanyl, heroin, prescription pills–and most of them such frequent inmates at the jail the sheriff likes to call the “Green Roof Inn” that they could have their own rewards program.

Such broad arrest sweeps followed by news conferences are themselves a frequent-flying feature of every sheriff’s administration of the last 20 years, not just as elections near (they’ve tended to happen at least once a year regardless), all following the same template: posters of the numerous suspects are arrayed next to the law enforcement chiefs announcing the sweep. Statistics about the particular sweep are listed (types of drugs seized, amounts, street value). And tough pronouncements made.

“And for the fugitives we have not apprehended yet,” Staly said in his concluding remarks today, “we will get you so instead of having to keep looking over your shoulder and wondering when you are going to jail, just turn yourself in. We have a room and a bed available for you at the Green Roof Inn. It might not be a five star hotel but it’s a lot better than being a wanted fugitive and wondering when your day is up.” Staly has used the words in one variation or another in previous sweeps. Today he was among the arresting officers, in one case having “the pleasure of putting one in handcuffs myself after I spotted him in his front yard before the arrest team arrived,” he said.

Even reporters are reduced to asking some of the same questions, begged by the repetitiveness of the ritual: how will it end? Staly addressed the question this way today: “The state attorney and the sheriff have always asked for drug addiction treatment funded by the state and until the state properly funds it we will always be chasing drug dealers because there’s a drug addiction problem in this county. With 440 arrests total between these defendants the sheriffs office is clearly doing their job but it’s time for the system to do their job.”

Staly has consistently made a distinction between users and dealers, saying users must be dealt with through treatment programs, with the state stepping up its support for such programs, especially in Flagler County. Flagler has just one residential treatment program, and even that one is restricted to young mothers. There is no residential treatment program for men or for others struggling through addiction. St. Johns and Volusia counties aren’t much better off, with a few dozen beds between them. State lawmakers have not been interested in serious investments in treatment, though treatment dollars have better dividends in reduced recidivism than do punishment dollars–as proven by the revolving doors for drug dealers even at the Flagler jail.

Take one example from those arrested today. Michael Connelly. Several years ago the 38-year-old faced a felony charge for not returning a leased television to Z-Best. He pleaded to the charge and the judge withheld adjudication, because it was his first felony. Two years ago he was arrested for battery. The charge was dropped. Last year he was arrested on a misdemeanor drug charge and found guilty, paid a fine. Earlier this year he was charged with grand theft, a felony. The charge was dropped. A few months later he was charged with cocaine possession. By then he was homeless. He was found guilty. The judge again withheld adjudication. That was in April. Today, he was rearrested, this time on a charge of hydromorphone possession and the illegal use of a two-way communication device.

Or take Nina Holley, a 36-year-old resident of Bunnell with a dozen arrests, more than half of them felonies, over the past half dozen years, many on drug charges, including four such charges–among them fentanyl possession–last February. Shge was found guilty on three of the charges, two of them felonies. She was sentenced to six months in prison on Feb. 25, with 16 days’ credit, which means she should have served until early August. She was released on June 15. Today she was among those wanted for selling fentanyl within 1,000 foot of a public park. She was not among those arrested.

There’s also Joshua LeMaster, a 25-year-old resident of Kingswood Drive with his own long history of arrests–hashish possession, lewd and lascivious battery, dealing in stolen property, weapons charges–though the last time he was in the news was less than three weeks ago, when he was shot at a garage off Hargrove Lane. The facts were ion dispute at the time as to his role. Today, he was shown on one of the two posters as having “charges pending” for allegedly selling THC oil in connection with that incident.

So goes the rest of the list, with 12 of the 27 individuals included on the two poster boards at today’s news conference arrested, or re-arrested.

One of today’s search warrants was served at 20 Poppy Lane in Palm Coast, where several undercover operations had been conducted, concluding that the house was a suspected drug house. “Detectives confirmed that narcotics were being sold from the residence and witnessed non-stop traffic coming and going from the residence at all hours of the day and night,” a sheriff’s release stated. “During the serving of the search warrant, there were 2 adults and 3 children (ages 12, 9, and 1) inside the home. During the search, detectives seized over three ounces of Cocaine, with an approximate street value of
$7,200.00. Numerous scales, packaging materials, and approximately one ounce of Cannabis along with $3,000.00 cash believed to be proceeds from narcotics sales were also seized.”

Detectives arrested Christopher Shane Brock, 29, and charged him with Trafficking Cocaine, Possession of Drug Paraphernalia, and Possession of Cannabis. Brock had faced a felony charge of child abuse and two misdemeanor drug charges in 2013, and was eventually found guilty of all three, after the felony charge was reduced to a misdemeanor (contributing to the delinquency of a child).

Not every sweep has targeted drug pushers, but every such operation gets a monicker usually tagged to something in the zeitgeist: “Operation Wrong Number” targeted unlicensed contractors early in Staly’s tenure, “Operation Red Light to Green Roof” just months later was a rare prostitution sting. “Operation Spring Cleaning” the following year–back to drug dealers–also featured the sheriffs of Volusia and Putnam counties alongside Staly. Last summer at this time it was again just Staly and Larizza, that one with 40 warrants and 23 arrests at the time. It was called “Operation Heat Wave.”

With no deference to subtlety but with a hard-to-miss contradiction, today’s operation was called “Operation Unmasked–Stop the Spread.” (Health officials say going unmasked only accelerates the spread.)

Notably, none of the 45 people who appeared on the “Operation Heat Wave” posters made a repeat appearance in today’s posters. Whether reformed or incarcerated, the new crop with its own long history of 440 arrests between them suggests the pipeline of drug dealing is nowhere near dry, as the sheriff’s own figures indicated today: “There have been 179 suspected drug overdoses in Flagler County so far in 2020, up 189 percent from 2019,” Staly said. “Many experts across the country believe this increase is related to covid-19 lockdowns and the stresses the pandemic has caused across America.
2020 has seen 17 fatal overdoses compared to 14 in 2019.

“In fact,” he continued, “today we are investigating a suspected overdose death that occurred early this morning and just 10-days ago, on International Overdose Awareness Day and on the same day a drug dealer was sentenced to 30-years in prison for dealing a fatal dose of fentanyl laced heroin we investigated a fatal overdose death that evening.”

The full list of those arrested or sought as provided by the sheriff’s office: 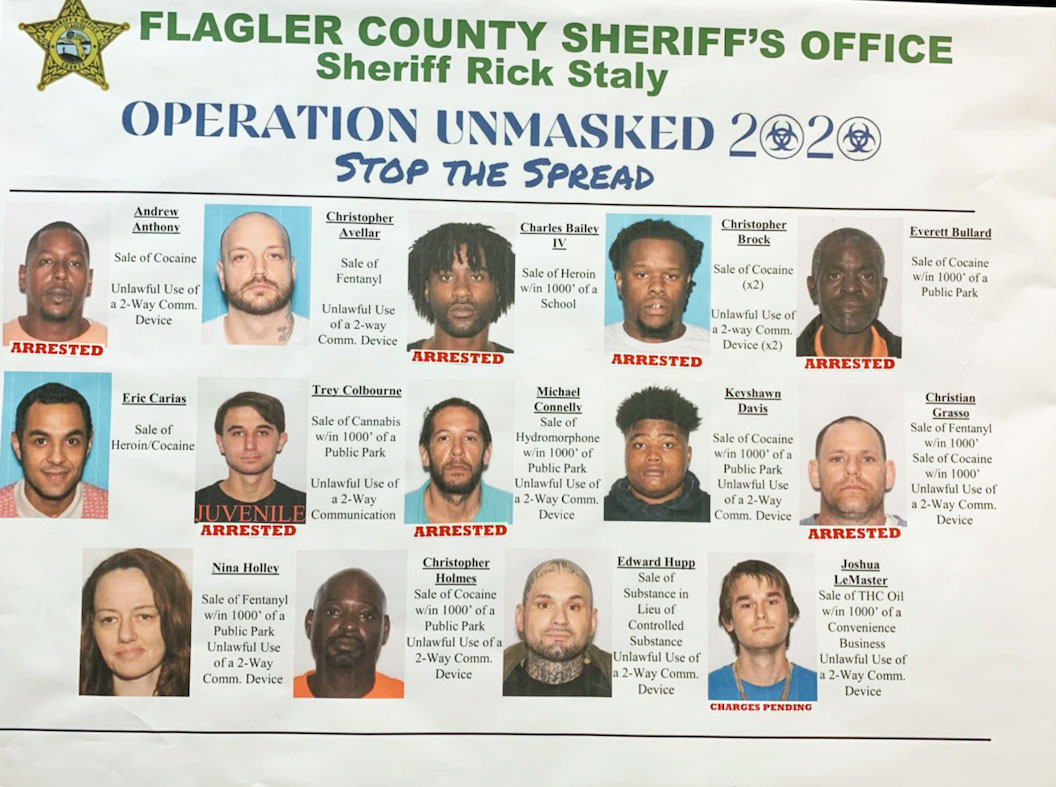 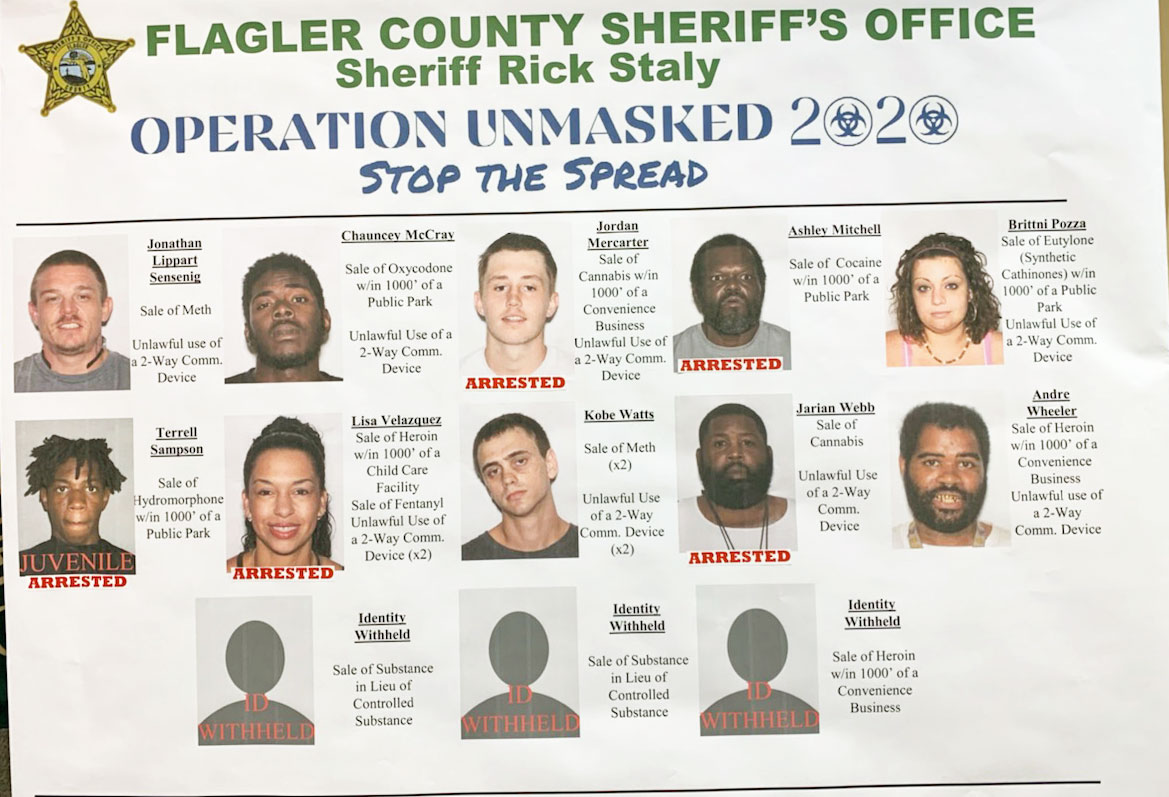