As we’ve done every year on Christmas, here’s the story behind Town Center’s Fantasy Lights in Palm Coast, now in their ninth year.

Tiffany Lynn Butler was 8 years old the Christmas of 1996 when she traveled with her family to Evansville,  Ind., her mother’s hometown, and saw for the first time the city’s famous Christmas lights drive-through festival at venerable Garvin Park–60 displays of lions, flags, dragons, steers, rocking horses, reindeer, golfers, giraffes, peacocks and of course Santas bulbing up the night for thousands of visitors. It’s Indiana’s biggest Christmas-lights display, annually drawing some 60,000 visitors to the 80-acre park. Back in Palm Coast, Tiffany and her sister Brooke, who was seven years older, would watch a video of their excursion through Garvin Park. Why, Tiffany asked her father,  couldn’t there be a similar festival in Palm Coast?

Tiffany, who was born in DeLand, never made it past her 14th Christmas. An eighth grader at Buddy Taylor Middle School at the time, she’d battled a weak heart her entire life. She died two days after surgery in a Miami hospital on Nov. 3, 2002. “That makes me sick, I can’t stand that word,” her mother, Libbie, says. “She didn’t die, she went to heaven.”

Christmas died that year for Tiffany’s parents, Bill and Libbie. They buried themselves in work–Bill as a landscape architect for Palm Coast, Libby back in school to earn an education degree (she taught at Bunnell Elementary, and now subs there.). “Trying to get over the grief of not having Tiffany here,” Bill wrote in a subsequent account, I kept thinking about her excitement with the Christmas light display.” And a way to deal with the grief.

What the Seals shine up in Indiana

A few months after Tiffany’s death, Bill joined the Flagler County Rotary Club. Two years later he proposed the idea to the club’s board: why not follow Evansville’s example? The Indiana light display was launched in 1993 by Easter Seals Southwest Indiana. Corporate sponsors pay up to $5,000 for each light display (in exchange for a small plaque advertising their name and sponsorship). Visitors pay $7 to $25 for the drive-through, depending on the number of people in their vehicle. The money ($142,230 in the 2008-09 Christmas season, $1.9 million since the Fantasy of Lights began) all goes to the Easter Seals Rehabilitation Center in Evansville.

Evansville, the third-largest city in Indiana, has a metro population of about 350,000 and will celebrate its 200th anniversary in 2012. Palm Coast likes to think it’s a city, but it’s barely 10 years old and still wet behind the scrub. However worthy the cause (the money would be donated to the Rotary’s Polio Plus fund, among other charities) Bill’s challenge was to convince the Rotary board that businesses would underwrite light displays ranging from $600 to $13,000 each and people would turn up somewhere (it wasn’t clear where, back in 2005) to look at giraffes, donkeys and golfers made of light bulbs.

The board went for it. Businesses didn’t, quite. At least not at first. By mid-September 2006, three months away from Palm Coast’s first planned Fantasy of Lights (the local version was renamed Holiday Fantasy Lights) Bill had not a single sponsor. Then three signed on in one day. It happened to be Sept. 13, Tiffany’s birthday. She would have been 18 that day. Bill is convinced she pulled a few strings.

The rest is a history of light switches.

The first display was held at one of the last places in town that inspires roasting chestnuts, eggnog or Nat King Cole: the Indian Trails Sports Complex on North Belle Terre Parkway. But Town Center didn’t quite exist yet. It still doesn’t, though its build-it-they-will-come fervor is written on every vacant sidewalk and gaping lot, and it is a fabulist’s dream (down to the daring plagiarism of Frederick Law Olmstead‘s fabulous park. Garvin Park, like the original Central Park, is listed on the National Register of Historical Places). So Town Center was a natural fit for Tiffany’s lights.

And there they’ve been, some three dozen light displays, depending on how you count a clever double-bill of Nativity scenery that, because it’s sponsored by private organizations, appears to get around the prohibition on religious displays on public land; it doesn’t, but no one is about to badger the Wise Men and the amped-up creche with legalese (especially as it is one of the statlier displays). That’ll happen as Palm Coast and Town Center mature past their youthful presumptions.

Unlike Evansville’s festival, Palm Coast’s is free (it draws a few thousand people), thanks to the Rotary’s sponsorship and its nightly corp of volunteers (including, on Christmas Eve and Christmas night, braving hints of polar air, Thea Hein-Mathen).

For Bill Butler, it’s a closing of a circle of sorts (or halo, as Bill might see it: Tiffany’s favorite show was “Touched by an Angel”), like the circle around the park pond that forms the Fantasy Lights circuit. “My wife and I,” Bill wrote in his account of the history of the lights, which appears every year in the Rotary Club’s program, “purchased a display depicting an angel tossing stars from heaven and dedicated it to Tiffany’s inspiration and memory.”

An there she is, between the Teddy Bear Snowball Fight and the elf waving a checkered flag, her smiling face on a small placard next to the tossed stars, just her smile and a brief dedication to her. Visitors who don’t know her story are nevertheless seized by the only meaning the dedication conveys. A pang of grief inevitably flickers across the lights, tightening the heart. It’s brief. It’s Christmas. Tiffany is still pulling strings.

Tiffany’s Fantasy Lights will be on display through the end of the month, nightly from sundown to around 9 p.m. 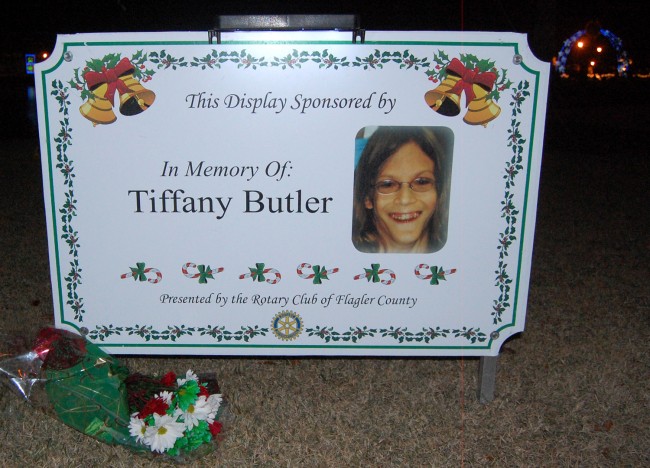