The Flagler County School Board meets for a business meeting at 5 p.m. (as opposed to the usual 6 p.m.) in board chambers of the Government Services Building. The board is expected to approve the renewal for two years of a contract with Synovia Solutions GPS Bus Tracking System, which includes extended real time engine monitoring, time and attendance monitoring of bus drivers and aides, improved GPS mapping and incident reporting. The renewal is for $30,480 per year. The board will also approve advertising for bids to bulldoze the Corporate Plaza building off Palm Coast Parkway. It used to be ITT’s iconic corporate center as Palm Coast was born.

The Palm Coast City Council meets at 6:30 p.m. at City Hall. The meeting begins with a presentation on four video awards the city’s video production team, headed by Tom Hanson, received for videos about public safety, recreation and economic development. The council is expected to approve a 120-day moratorium on bottle club operations in the city as the administration develops a more restrictive policy on such clubs. 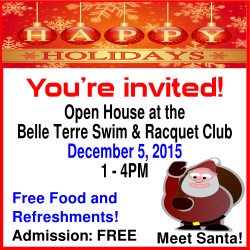 Upcoming: On Dec. 5, You’re all invited to a Belle Terre Swim and Racquet Club open house and fund-raiser: Come by and enjoy the pool, the sauna, the weight room, live music, a bake sale, plenty of games and fun for the whole family. It’s free admission. The event is scheduled for 1-4 p.m. The Flagler County School Board granted the Swim and Racquet Club an extension to make good on the promise of a new batch of membership to ensure that the venerable club stays open in months and years ahead. But the club needs your support, as the school board is set to reevaluate how the membership drive is going as early as January. This fund-raiser and open house is intended to show the community how much there is at the club, and how inexpensive the memberships are. Admission to the Dec. 5 open house is free.

Is Flagler is headed in the right direction? The Chamber of Commerce wants to hear from you: “Please take the Chamber’s Economic Development survey and share the link with family, friends and colleagues. It’s important for everyone who lives and works here to weigh in on this important topic,” the Chamber says. “You might even win a prize for your effort. We are trying to get 1,000 responses before the end of the year. Click here to access the survey.

Trump Campaign Bus Rolls Into Palm Coast, Transformed as Donald Anti-Matter: A group of artists working on behalf of a Philadelphia artist named t.Rutt bought the former Trump campaign bus in Iowa and transformed it into a mobile protest of the presidential candidate. The bus will be part of an art installation at Art Basel in Miami starting Wednesday.

Proposal Would Force Cities, Including Bunnell and Flagler Beach, to Move Elections to November: Florida’s municipalities intend to fight a proposal now before state lawmakers that would take away their ability to set local election dates and could extend the terms of some current elected officials. State lawmakers on Thursday will look at a proposal that seeks to improve local voter turnout by requiring every city, town and village to line up their elections the same day each year.

Man Charged With Aggravated Assault in Confrontation With Ex-City Commissioner: Jimmy Flynt, the former Bunnell city commissioner, intervened in what looked like a brewing fight on the grounds of Bunnell’s First United Methodist Church. Joshua Meyers, a 26-year-old resident of 1762 Mahogany Boulevard in Daytona North, is accused of brandishing a knife at him.

Citrus disease: The Senate Agriculture Committee will get an update about “citrus greening,” a disease causing widespread damage to Florida’s citrus industry. (10 a.m.)

Public corruption: The Senate Governmental Oversight and Accountability Committee will take up a bill (SB 582), filed by Sen. Don Gaetz, R-Niceville, that would take a series of steps to strengthen public-corruption laws. (1 p.m.)

Medical tourism: The Senate Health Policy Committee will consider a proposal (SB 178), filed by Chairman Aaron Bean, R-Fernandina Beach, that would create a program to market Florida as a “health care destination” — a concept known as medical tourism. Also, the bill could help clear the way for what are known as “direct primary care” agreements between doctors and patients. Such agreements involve patients paying monthly fees to doctors and then being able to get routine primary care without additional costs. (1 p.m.)

Cohabitation ban: The Senate Judiciary Committee will take up a bill (SB 498), filed by Sen. Eleanor Sobel, D-Hollywood, that would repeal a longstanding law designed to bar men and women from living together if they are not married. (4 p.m.)

FPL Plant: The Florida Public Service Commission will hold a hearing on what is known as a “determination of need” for a proposed Florida Power & Light plant in Okeechobee County. (9:30 a.m.)

The Demographic Estimating Conference will analyze the state’s population. (3:15 p.m.)

Long-hidden, vivid and disturbing details of the 1972 Olympics attack in Munich are beginning to emerge https://t.co/eUfiUVLNSa

Here is the #INFLUENCE100 — The most influential people in Florida politics https://t.co/ifJkqC5MK9 #FlaPol

Where did the word ‘Taser’ come from? It’s a weapon used to subdue ‘savage’ Africans in century-old sci-fi novel https://t.co/gfwZlrs4kd

A Centers for Disease Control Briefing:

The Time to Act Is Now

December 1 is World AIDS Day, an opportunity for people to work actively and collaboratively with partners around the world to raise awareness about HIV and help us move closer to the goal of an AIDS-free generation. This year’s theme, “The Time to Act Is Now,” calls us to act with urgency to implement the latest high-impact, evidence-based HIV prevention strategies.

An estimated 36.9 million people are living with HIV/AIDS worldwide. As a science-based public health and disease prevention agency, CDC provides support that helps more than 60 countries strengthen their national HIV/AIDS programs and build sustainable public health systems. CDC conducts these activities through the U.S. President’s Emergency Plan for AIDS Relief (PEPFAR) , the largest commitment by any nation to combat a single disease.

Recent scientific breakthroughs now point the way to achieving an AIDS-free generation, a goal championed by President Obama in his 2013 State of the Union address. CDC, through PEPFAR, is working to achieve that inspiring goal through proven science, smart investments, and shared responsibility with partner countries.

Global efforts have resulted in approximately 13.5 million persons in low-income and middle-income countries receiving antiretroviral therapy (ART) for HIV infection in 2014, an increase from 2013. Globally, more than 15 million people are on ART.

New HIV infections have fallen 35 percent since 2000, with 66 percent of the 2 million new HIV infections occurring in sub-Saharan African countries, where women account for more than half the total number of those living with HIV.

CDC’s global HIV/AIDS activities are grounded in science and are critical to saving lives and preventing new infections. Core activities focus on:

CDC’s innovative programs are helping countries collect and use more detailed data to target HIV treatment services to where they are needed most and to reduce the cost of delivering services. These activities also support greater accountability and transparency in the use of U.S. government funds. CDC works with key partners such as the Global Fund to Fight AIDS, Tuberculosis and Malaria —to which the United States is the largest contributor—to ensure complementary programming for maximum impact of investments.

CDC has contributed to saving millions of lives through PEPFAR. Across the globe, AIDS-related deaths have fallen by 42 percent since the peak in 2004. The increased life expectancies of people in their most productive years have helped build more secure families and bolstered fragile nations devastated by the HIV epidemic. New pediatric HIV infections have dropped by 58 percent since 2000. Worldwide, 220,000 children became newly infected with HIV in 2014, down from 520,000 in 2000. This significant achievement is due largely to evidence-based programming to prevent mother-to-child transmission. Still, millions of people around the globe are waiting for access to lifesaving antiretroviral drugs.

The United States has made an unwavering commitment to work with partner governments and other stakeholders to turn the tide on HIV/AIDS. The goal of achieving an AIDS-free generation worldwide is a shared responsibility, with partner countries in the central role.

Around 1.2 million people are living with HIV in the United States, and 1 in 8 don’t know it. The number of new HIV diagnoses has remained fairly stable in recent years.

More tools than ever are available to prevent HIV, including pre-exposure prophylaxis (PrEP) for people who are at very high risk for getting HIV. Taking PrEP medicine daily can reduce the risk of getting HIV from sex by more than 90%. Among people who inject drugs, it can reduce the risk by more than 70%. The latest edition of Vital Signs, released on November 24, 2015, provides more information on populations who could benefit from PrEP. According to the report, many people in the United States, especially many gay and bisexual men and injection drug users, are at high risk for HIV and could benefit from PrEP.

This year, the White House updated the National HIV/AIDS Strategy to 2020. On World AIDS Day, it will release a federal action plan to implement the strategy. CDC supports the strategy’s vision of a nation where new HIV infections are rare. CDC’s HIV prevention efforts in the United States target the populations most at risk and include:

Also, CDC, along with other agencies and organizations, will convene the 2015 National HIV Prevention Conference, December 6-9, 2015. This conference will facilitate collaboration among scientists, health care providers, community workers, and others who are working to stop the spread of HIV in the United States.

CDC continues to work with our many partners to bring the best available prevention and treatment tools to the communities that need them most, at home and around the world. On this World AIDS Day, we are pleased to join our partners to take unified action to prevent the spread of HIV.

The following is an update of ongoing construction and development projects in Palm Coast, through Nov. 5:

County’s I-95 Interchange Matanzas Woods Reclaim Water, 76 percent done: Retention ponds are being excavated and fill continues for the ramps.

Palm Harbor Parkway Roadway Extension, 32 percent done: The City Fiber Optic cable was removed to allow the demucking to continue north on Forest Grove. The Fiber Optic cable will be replaced when the new force main is installed. Installation of stormwater pipe continues.

North Old Kings Road Extension to Matanzas Woods Parkway, 19 percent done: Asphalt was installed on the new section of roadway adjacent to the old roadway at the intersection of Old Kings Road and Forest Grove.

Louis Spohr (1784-1859): Concerto for quartet & orchestra, Performed by the Filarmonica quartet and the Novosibirsk Philharmonic

The performance is a bit problematic, but Spohr is not: