You weren’t hallucinating if you saw what looked like a big blue Trump campaign bus in Palm Coast this morning. The bus had parked for the night at the Hampton Inn off of State Road 100, then spent an hour prepping for the next leg of its journey to Miami Beach by the Mobil station on 100. It’s the bus the Trump campaign leased in Iowa for several months, where it crisscrossed the state and reportedly accompanied Trump at the Iowa State Fair in August.

But it’s no longer quite a Trump bus. Look closer, and you’d have noticed a fat period between the T and the RUMP. Look on the other side of the bus, and you’d have seen the letters “t.RUTT” plastered in an equally large white font where TRUMP used to be. The bus has been transformed by a group of artists into an anti-Trump palimpsest, ridiculing Trump’s prejudices and stereotypes.

T.Rutt is the enigmatic Philadelphia “character” of an artist—ostensibly neither man nor woman—who’s recently been drawing attention with conceptual art installations framed in arresting financial or political themes. The T.Rump bus is his latest. It was on lay-over in Palm Coast, on its way to Art Basel Miami, the colossal art show, where it’ll be part of an installation at the Conception Art Fair starting Wednesday.

But t.Rutt—the name is a play on word on Marcel Duchamp’s famous R.Mutt signature–was nowhere near the bus this morning.

Only David Gleeson and Mary Mihelic were. Mihelic is a New York City artist. Gleeson is a Philadelphia artist and gallery owner who shows t.Rutt’s work, and apparently does what t.Rutt doesn’t do (though the similarities between t.Rutt’s philosophy and written style are uncannily similar to Gleeson’s philosophy and verbal style, and t.Rutt’s website, created in September, is registered to Gleeson): Gleeson bought the bus in Iowa in October on t.Rutt’s behalf and has been reinventing and driving it since, prepping it for the show in Miami—a show with a title as in-your-face as its inspiration: “America on the Rag.”

“It’s a little bit of a controversial title I guess, but I think the artist was really convinced to try and push it as almost the way Trump pushes everything,” Gleeson says. “It was this idea that the Trump phenomenon is creating such a polarizing emotional effect that, wouldn’t it be interesting if this show, which is about Donald Trump and trying to question him, could somehow engage the public in a way to vent that frustration and to kind of get it out.”

And so the tagline on the side of the bus: “Make America great again” has been painted over with “Make fruit punch great again.” It’s an invitation and an allusion. The invitation, enabled by small plastic cups handed out to whoever wants a splash, is to hurl red fruit punch at banners of Trump draped alongside the bus. The allusion—that is, the red punch, and the wordplay on punch–is to Trump’s insult of Fox’s Megyn Kelly, when Trump alluded to her menstrual cycle after a GOP debate. “So this idea of just throwing punch up on these banners and staining them references this notion of his whole thing about putting down Megyn Kelly, about blood was ‘coming out of her eyes, out of her wherever,” Gleeson says. “Let’s not let him and these certain types of men continue to use this negative imagery about women. So it just kind of takes the whole thing and flips it on its head, and lets the people get involved.” (Naturally, Gleeson, Mihelic and the bus made an unplanned stop in Flagler before setting off this morning at that other place that flips everything on its head: JJ Graham’s Salvo Art Project, the art gallery in Bunnell.)

There’s no telling how the Trump campaign feels about its ex-bus getting transformed into Trump anti-matter: the Des Moines Register tried to get the Trump campaign to comment. It didn’t get anywhere, though attempts to contact t.Rutt didn’t get very far, either: FlaglerLive received an email from TRutt after learning that a story was in the works, signed by Jamie,” who identified himself or herself as “the artist’s coordinator,” and asking if any further information could be provided. There was no answer when Jamie was asked a few basic questions about t.Rutt.

But any Trump-minded entrepreneur would appreciate the way the bus was acquired and transformed.

On Sept. 18 Rachel Maddow mentioned on her show that that very day the Trump campaign bus went on sale on Craigslist Des Moines. The Des Moines Register had first reported the story, and almost as soon as it did, the Craigslist ad vanished, though the bus was still for sale.

Mihelic—the New York artist traveling with Gleeson—was watching. She knew Gleeson was working on a t.Rutt project again. She texted him about the bus for sale. “I was asked to go out there and see what was doable, work out a deal,” he said. So he did. He bought the 1998 bus for $14,000 ($1,000 less than advertised). He describes it as a 1998 MCI bus on its third engine and its third transmission, though still with 1 million miles. It doesn’t go faster than 60. It used to be a party bus, leased for tailgate parties until the Trump campaign took it over, still with its track lights, a  sound system, a satellite television, a couple of tables up front, more roomy seating in the back, though nothing The Donald would suffer very long. Gleeson says Trump may have been on board twice.

If it breaks down, Mihelic’s brother is a mechanic, Gleeson is handy with repairs too if necessary, but their back-up plan is a white van Mihelic is driving behind the bus, filled with art work, in case it doesn’t make it all the way to Miami. (The art work includes her own, which will be shown alongside “America on the Rag.” She is showing her “Running Girls” series, inspired by the 57 schoolgirls who ran away from Boko Haram terrorists in Nigeria in April 2014 when they captured almost 300 girls. Mihelic is working on 53 separate works, most of them completed and viewable here).

On Oct. 19, Maddow devoted three minutes to t.Rutt-Gleeson’s acquisition on her show. The bus has picked up a few other media glares along the way. Since leaving Philadelphia three days ago the bus has traveled with little let up, but the journey has had its moments. “There’s a lot of Trump supporters who drive trucks, apparently,” Gleeson said. “When I was driving from Iowa I would get honks. It picked up a little bit in South Carolina yesterday, a few times out the window, ‘Hey, Trump for President’ kind of thing.”

The stop at South of the Border, Mihelic said, lent itself to a lot of travelers wanting a shot of themselves with the bus and the Mexican-themed background providing just the right dose of irony.

Trump has not been kind to Mexicans, and the art installation to come will show it. The installation includes a bed and sword going through it that symbolize Trump’s alleged prowess in bed, and a huge taco stand with a menu based on Trump’s politics, such as “a great wall of tacos, burritos and enchiladas” you must imagine to be 10 feet high, 4 feet thick and 2,000 miles long, like the actual wall Trump wants to build along the Mexican border. “Our fattest, densest and thickest offering, Trumpito’s Mexican Wall feeds up to 11 million people and, with extra beans, it creates enough gas to get everyone home safely,” reads the menu. Also on the menu: Sangria de Megyn Kelly, “traditional Spanish ‘bleeding’ wine and fruit beverage.”

Initially Gleeson made no secret of his intentions: to help accelerate Trump’s fall from the top of the polls. Nothing of the sort has happened. Trump has been solidifying his lead, whether in Iowa, New Hampshire, South Carolina or Florida, where he’s well ahead even of Marco Rubio and Jeb Bush, and where the latest polls have him defeating Hillary Clinton in the general. “The realities are,” Gleeson concedes just before setting back off on his journey, “he may be able to take it right on through to the nomination, and that’s a pretty scary thought.”

The bus might then need a fourth engine and transmission to make it through Trump’s reign. 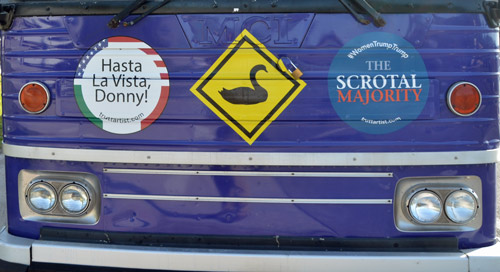