The Obama administration has announced a significant change to U.S. immigration policy. Illegal immigrants with family in the United States may now become permanent residents.

Barack Obama’s first term as president was tough for illegal immigrants. His administration deported more than 1 million immigrants, many of whom were not criminals. PBS Frontlinereported on some of the fallout of Obama’s immigration enforcement system as well as stories about hidden abuse in immigrant detention centers.

In fact, according to a 2011 investigation by the Florida Center for Investigative Reporting, a program aimed at removing illegal immigrants who were violent criminals was used to target and deport immigrants with no criminal backgrounds.

Immigrant justice groups have long criticized the president for deporting immigrants at such a high rate over the past few years.

Despite the backlash, however, Latinos in the United States helped catapult the president to his second term in November. Obama had signaled throughout the campaign – and more strongly right after his win — that he would revisit immigration reform.

Now, Obama has signaled that he intends to make good on his promises.

According to the Los Angeles Times. “Illegal immigrants who are immediate relatives of American citizens will have an easier path to permanent residency under a new Obama administration rule that could affect as many as 1 million of the estimated 11 million people unlawfully in the United States. The rule issued Wednesday by the Department of Homeland Security aims to reduce the time illegal immigrants are separated from their U.S. families while seeking legal status, officials said. Beginning March 4, illegal immigrants who can demonstrate that time apart from an American spouse, child or parent would create “extreme hardship” can apply for a visa without leaving the United States. Once approved, applicants would be required to leave briefly in order to return to their native country and pick up their visa. Sources said that the administration might expand the changes to include relatives of lawful permanent residents.” 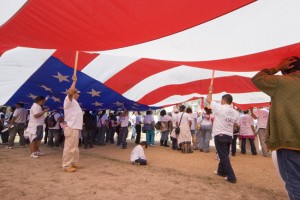