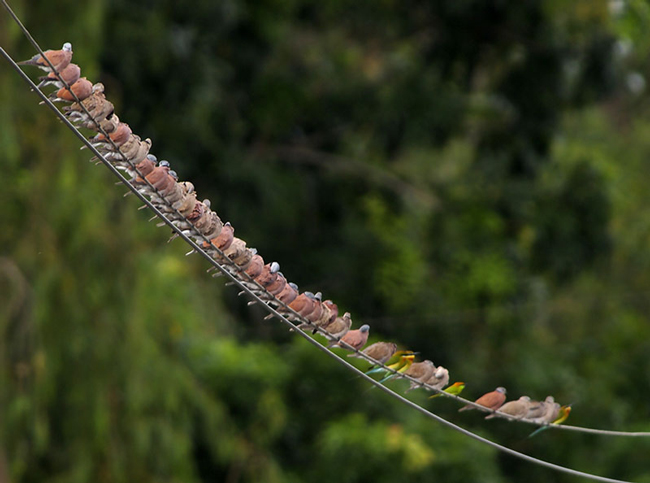 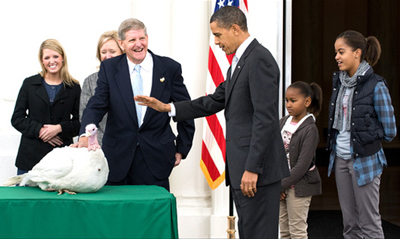 One thing we cannot possibly be thankful for: the humorless fanaticism of America’s god brigades, who were very busy around Thanksgiving. From ABC News: “Critics of President Obama felt little holiday cheer after the president did not thank God in his Thanksgiving-themed weekly Internet address. They immediately took to Twitter and the Internet to voice anger and disbelief. “Holy cow! Is that one screwed up or what?” columnist Sherman Frederick of the Las Vegas Review-Journal wrote in a Thanksgiving-morning blog post. “Somebody ought to remind Obama (and his speechwriter) that when Americans sit down around a meal today and give thanks, they give thanks to God.” Over on the website of Fox News Radio, radio host Todd Starnes also took issue. “His remarks were void of any religious references, although Thanksgiving is a holiday traditionally steeped in giving thanks and praise to God,” Starnes wrote. […] The popular website of London’s Daily Mail has taken the issue global, with a story under the headline “What a Turkey! Outrage as Obama Leaves God Out of His Thanksgiving Address.” […] Three of the Republican presidential candidates – Mitt Romney, Newt Gingrich and Rick Santorum – issued Thanksgiving statements that omitted any references to God. Michele Bachmann, Herman Cain and Rick Perry mentioned God in their statements. [… Obama] acknowledged this Thanksgiving would be “more difficult than most” for many Americans because of the economy, but added, “No matter how tough things are right now, we still give thanks for that most American of blessings, the chance to determine our own destiny.” Some days we really need a Mencken revival.

Flavor of the Month: Newt

From the Christian Science Monitor: Underlying the frenzied coverage of former House Speaker Newt Gingrich’s ascendance to front-runner status is a practical question: Is there a path for him to win the Republican presidential nomination? Yes, but it would be challenging, and experts call it unlikely. Here’s why. Until now, many campaign watchers viewed his bid as a vanity effort designed to help sell his books and a new documentary made with wife, Callista. […] What his campaign had not done, however, is raise the money or create the extensive infrastructure required in key early states to advertise and ultimately get residents to caucus sites or polls. Meanwhile, the front-loaded GOP primary calendar makes it difficult for anyone who fails to finish first or second in Iowa or New Hampshire to regain momentum. […] Still, if Gingrich pulls out a ‘Comeback Kid’ moment in New Hampshire to rival his former nemesis Bill Clinton’s 1992 second place finish there, he could meet a friendlier crowd in South Carolina, the next state on the primary schedule.” The full story. 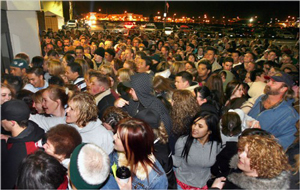 From Psychology Today: Thanksgiving: “We’re not talking about gathering with friends and family to express gratitude for what we have been provided. We’re referring to the national customs of eating to the point of pain on Turkey Day, then turning shopping into a blood sport on Black Friday. Neither makes much sense on the surface. While it’s one thing to overeat on special occasions, it’s quite another to gorge oneself, as many of us do on Thanksgiving. The average American consumes 3,000 calories and 229 grams of fat at the Thanksgiving table. To put that in perspective, a fit individual would have to run for four hours to burn off those extra calories. Somehow, despite the daylong orgy of fatty food, many Americans nevertheless manage to wake up before dawn the following day prepared to battle over discounts on laptops and talking dolls. The insanity and violence of Black Friday sales have long been the stuff of news headlines. Yet, despite the attention, millions of people amazingly continue to participate in the shopping frenzy each year, to the point of injury or worse. […] The explanation is likely more simple. One of the hallmarks of psychological science is that we are influenced by the actions of others—often more so than we’d like to admit. […S]ocial influence can be quite negative. When it comes to Thanksgiving and Black Friday, unfortunately, the influences skew more toward bad than good. When those around us succumb to indulgences, we’re more likely to succumb as well. […] Even worse, the Black Friday routine most retailers have adopted—locking entrances until the exact minute of opening time, inadequate staffing, no crowd management—means consumers are primed to act in the worst ways, recklessly charging into stores as soon as they are allowed.” The full post.

Teaching To the Test: How Teachers and Administrators Cheat 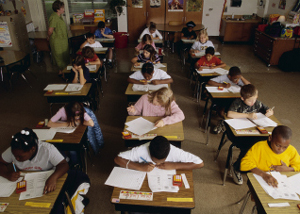 From the Wilson Quarterly: “The No Child Left Behind Act of 2001 […] implicitly encourages educators to reallocate classroom time, because it requires testing in only reading and math (in seven grades) and science (in three). Researchers have yet to determine exactly what the effects have been in schools, but NCLB has created a clear incentive for educators who are worried about their schools’ performance to cut back on art, music, and history classes while devoting more time to reading, math, and science. […] What about all the time spent on schooling students in the techniques of test taking—how to fill in answer sheet bubbles, whether to guess or not, what to do when time runs short, and so on? This kind of instruction has been known to eat up weeks, even months, of class time during which students study old examinations or practice test-taking skills. It should occupy less than a day. The firms that write today’s standardized tests, such as the Educational Testing Service and CTB/McGraw-Hill, strongly discourage this kind of preparation, correctly arguing that teachers who spend more than a little time familiarizing students with test formats can hurt learning and test performance by neglecting to cover the subject matter itself. […] Why do so many teachers persist in extensive test preparation? Partly because they have been misled. But there is a deeper and far more troubling reason why this kind of teaching to the test persists: It sometimes works. And it does so for a very bad reason: Repeated drilling on test questions only works when the items match those on the upcoming test. But if those questions are available to teachers, that means test security has been breached. Someone is cheating. […] Unlike in most other industrialized countries, security for many of our state and local tests is loose. We have teachers administering tests in their own classrooms to their own students, principals distributing and collecting test forms in their own schools. Security may be high outside the schoolhouse door, but inside, too much is left to chance. And, as it turns out, educators are as human as the rest of us; some cheat, and not all manage to keep test materials secure, even when they are not intentionally cheating. […] The current flawed testing regime puts teachers in a classic “damned if you do, damned if you don’t” bind. The only way out, according to many educators, is to eliminate testing, or at least the stakes attached to it. But without standardized tests, there would be no means for members of the public to reliably gauge learning in their schools. We would be totally dependent on what education insiders chose to tell us. Given that most testing critics are education insiders, that may be the point.” The full article.

From Gawker: “Sam Brownback, the Republican Governor of Kansas, is an enormous wussy mama’s boy tattletale. How do we know? Because a member of his staff literally went to the principal when a high-school student Tweeted that he “sucked.” Emma Sullivan, who is 18 years old, took a field trip to the capitol and saw Gov. Brownback speak. She Tweeted about the experience: “just made mean comments at gov brownback and told him he sucked, in person #heblowsalot.” Sullivan said she ended up in the principal’s office the next day. “He explained to me that someone from Brownback’s office got a hold of it and sent it to someone in charge of the district,” said Sullivan. She said her principal wants her to write an apology to Brownback.” Hey, Sam Brownback: you are a straight-up crybaby snitch. No one is going to sit at your lunch table for the rest of the year or sign your yearbook. You blow a lot.” The full post. 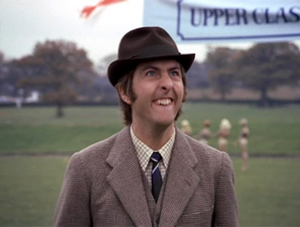 Eric Idle in The New Yorker: “While it is perfectly obvious to everyone that Ben Jonson wrote all of Shakespeare’s plays, it is less known that Ben Jonson’s plays were written by a teen-age girl in Sunderland, who mysteriously disappeared, leaving no trace of her existence, which is clear proof that she wrote them. The plays of Marlowe were actually written by a chambermaid named Marlene, who faked her own orgasm, and then her own death in a Deptford tavern brawl. Queen Elizabeth, who was obviously a man, conspired to have Shakespeare named as the author of his plays, because how could a man who had only a grammar-school education and spoke Latin and a little Greek possibly have written something as bad as “All’s Well That Ends Well”? It makes no sense. It was obviously an upper-class twit who wished to disguise his identity so that Vanessa Redgrave could get a job in her old age. […] Thomas Jefferson produced the Declaration with the aid of a ghostwriter, a woman of color named Betty Mae, who was a non-voluntary worker. “Moby-Dick” was written not by Herman Melville but by Herman Melbrooks, who wrote most of it in Yiddish on the boat over from Coney Island. […] Mere lack of evidence, of course, is no reason to denounce a theory. Look at intelligent design. The fact that it is bollocks hasn’t stopped a good many people from believing in it.” The full shout and murmur. 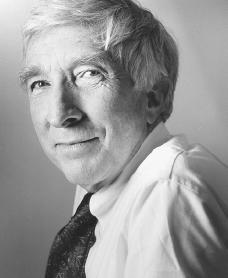 The light the sun withdraws the leaves replace
in falling, sweeping clean the clouded sky.
This brightness shocks the window like a face.

Our eyes contract to hold the sudden space
of barrenness—bare branches, blue, up high.
The light the sun withdrew has been replaced.

The tiny muscles of the iris taste
past time—old falls, slant light—recalling why`
this brightness shocks the window like a face.

To children, years are each a separate case,
enormous, full of presents and surprise:
the Fight the sun withdraws the leaves replace.

For grown-ups, reminiscence scores the days
with traces veteran nerve-ends recognize
when brightness shocks the window like a face.

November, we know you—the grudging grace
of clarity you grant the clouded eye.
The light the sun withdraws the leaves replace
with brightness at the window like a face.