Philip Levine, 83, the Detroit-born poet, was named America’s 18th poet laureate by the Library of Congress, succeeding W.S. Merwin. Others who’ve served as laureate include Kay Ryan, Charles Simic, Donald Hall, Ted Kooser, Louise Glück, Billy Collins, Stanley Kunitz, Robert Pinsky, Robert Hass, Rita Dove and Richard Wilbur. “He’s the laureate, if you like, of the industrial heartland,” James Billington, the librarian of Congress, told the New York Times. “It’s a very, very American voice. I don’t know that in other countries you get poetry of that quality about the ordinary workingman.” Referring to Levine’s ironic and self-effacing nature, he said: “This wasn’t really a factor in the choice, but he doesn’t seem to have that element of posing that I suppose we all suffer from to one degree or another. He has that well under control.” Levine is the author of 20 collections of poems, including most recently “News of the World” (2009), which The New York Times Sunday Book Review describes as “characteristically wise.” Levine won the 1995 Pulitzer Prize for “The Simple Truth,” the National Book Award in 1991 for “What Work Is” and in 1980 for “Ashes: Poems New and Old,” the National Book Critics Circle Award in 1979 for both “Ashes: Poems New and Old” and “7 Years From Somewhere,” and the 1975 Lenore Marshall Poetry Prize for “Names of the Lost.”

I walk among the rows of bowed heads–
the children are sleeping through fourth grade
so as to be ready for what is ahead,
the monumental boredom of junior high
and the rush forward tearing their wings
loose and turning their eyes forever inward.
These are the children of Flint, their fathers
work at the spark plug factory or truck
bottled water in 5 gallon sea-blue jugs
to the widows of the suburbs. You can see
already how their backs have thickened,
how their small hands, soiled by pig iron,
leap and stutter even in dreams. I would like
to sit down among them and read slowly
from The Book of Job until the windows
pale and the teacher rises out of a milky sea
of industrial scum, her gowns streaming
with light, her foolish words transformed
into song, I would like to arm each one
with a quiver of arrows so that they might
rush like wind there where no battle rages
shouting among the trumpets, Hal Ha!
How dear the gift of laughter in the face
of the 8 hour day, the cold winter mornings
without coffee and oranges, the long lines
of mothers in old coats waiting silently
where the gates have closed. Ten years ago
I went among these same children, just born,
in the bright ward of the Sacred Heart and leaned
down to hear their breaths delivered that day,
burning with joy. There was such wonder
in their sleep, such purpose in their eyes
dosed against autumn, in their damp heads
blurred with the hair of ponds, and not one
turned against me or the light, not one
said, I am sick, I am tired, I will go home,
not one complained or drifted alone,
unloved, on the hardest day of their lives.
Eleven years from now they will become
the men and women of Flint or Paradise,
the majors of a minor town, and I
will be gone into smoke or memory,
so I bow to them here and whisper
all I know, all I will never know.

Is it a sin to be nostalgic for Herbert Hoover? the 31st president of the United States would have been 137 years old this week (he was born Aug. 10, 1874), an entirely unremarkable milestone for a man who may have been remarkable before and after the presidency, but never during. Here’s how H.L. Mencken put it immediately after Roosevelt defeated Hoover in the 1932 election. This is from a Nov. 26, 1932 letter to Ezra Pound: “The utter collapse of Hoover gave me great delight. For some reason or other the fellow is unbearably offensive to me. I hate to look at him, or even to think of him. Why this should be I simply don’t know. Roosevelt is a weak sister, but he’ll be better known than Hoover. I look for a circus during the next year or two. Once the country discovers that it has been saddled with the whole war debt there will be Hell to pay.” Curiously, Mencken, who revered neither heaven nor hell, capitalized the H in that one. Sad to think that Barack Obama’s promise has withered so much that memories of Hoover aren’t that drastically offensive anymore. Here’s Hoover’s famous “chicken in every pot” hypocrisy from the 1928 campaign: 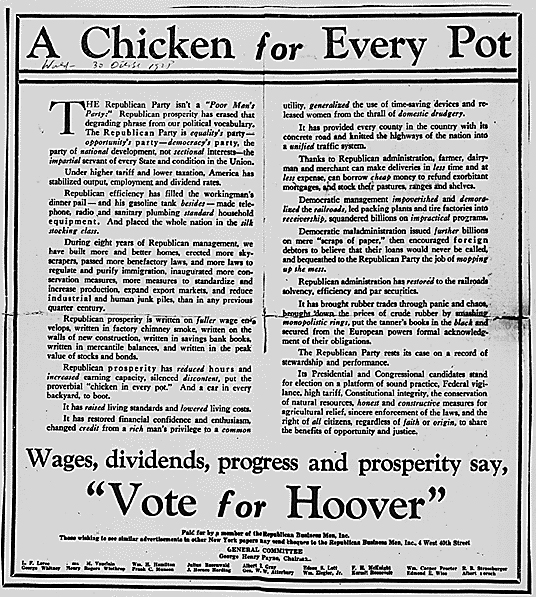 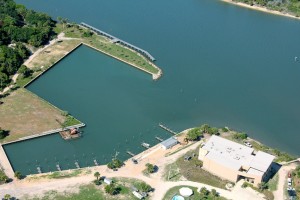 Didn’t they just do this one a few weeks ago? Here’s what we read at GoToby on July 20: “The Town of Marineland has opened its ports with a brand new marina facility creating a destination for boaters on the Intracoastal Waterway between Daytona Beach and St. Augustine, FL. The Town of Marineland Marina is designed as a mariner’s retreat in this remarkable coastal place surrounded by 40,000 acres of unspoiled beaches, maritime forests, and pristine coastal habitats that celebrate coastal Florida in its natural state, a destination for boaters seeking the quiet side of Florida. A new building on the site houses the marina office, laundry facilities, and restrooms with showers.” The piece does go on to note that the grand opening–excuse us: Grand–is scheduled for Aug. 20, which explains this release today from the Tourist Development Council’s Laura Gamba: “A Grand Opening celebration for the Town of Marineland Marina is scheduled for Saturday, August 20, 2011. Activities include a Ribbon Cutting Ceremony at 2:30pm followed by live bands, scrumptious delights from JT’s Seafood Shack, Budweiser Beer and a raffle sure to please all boaters. Lucky winners could win free dockage for a weekend or an entire month at the Town of Marineland Marina. Other prizes include a 3 day / 2 night stay in a 3 bedroom Ocean View Suite at the Hammock Beach Resort, 2 rounds of golf from Palm Harbor Golf Club, dolphin program at the Marineland Dolphin Adventure, kayak tour from Ripple Effect Ecotours, floating handheld VHF radio, gift certificate for JT’s Seafood Shack and more.” It all sounds grand except for the Budweiser: if events like these intend to attract people with beer, they really should serve beer.

It would be illegal for Palm Coast as a city, or for the Flagler County School Board, overtly to preach Christianity on public property. Illegal, in that it would violate the First Amendment’s prohibition on government endorsement of any particular religion. Apparently it’s not illegal for either to do so by way of a movie. The free movie in Palm Coast’s Central Park at Town Center this Friday (Aug. 12) will be ‘Soul Surfer,’ a movie doesn’t merely celebrate faith, or (in its best moments, faith in oneself), but Christian faith. Thankfully for the movie (and moviegoers), Christianity is upstaged–by the surfing scenes, by the good acting (Dennis Quaid, Helen Hunt), and the story itself (inevitably based on reality) of Bethany Hamilton, who was an amateur surfer in Hawaii when, at age 13, a shark bit her. Took her arm. She didn’t quit. Plus she had Carrie Underwood in her corner, the very Christian, haloed Carrie Underwood who plays a very Christian, haloed youth counselor. Coincidentally, “Soul Surfer” was released on Blu Ray the very same day that “Animal House” was released. Now there’s a movie to restore one’s faith in summer movies.

The movie begins at sunset in Central Park, which happens to be somewhere around 8:30 nowadays. Admission is free, though concessions will be available (at a price). The movie is shown on a big screen at the entrance to the park. For more information, please call the City’s Parks and Recreation Department at 386-986-2323. Here’s the official trailer: 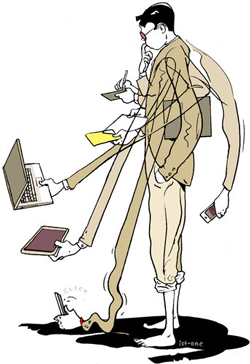 From The Times: “The relentless pressure to partake of the newest networks was underscored in June with the debut of Google+, Google’s social networking site. According to Nielsen, social networking is now the most popular online activity, ahead of sending e-mails, searching the Internet and playing games. Put another way: one in every four-and-a-half minutes spent on the Web is spent on a social networking site or blog. And last year the average visitor spent 66 percent more time on such sites than in 2009, when early adopters were already feeling digitally fatigued. […] But any attempt by weary networkers to scale back is complicated by the proliferation of Web sites like Klout and PeerIndex that are busily computing users’ influence scores to rank them in an online hierarchy. (On Klout, each user is assigned a score from 1 to 100. If you’re in the high teens, you’re average; if you’re in the 40s you have a healthy following; if you score 100, you’re Justin Bieber). […] The most active and organized users of social networks have daily routines for grooming their digital identities. Generally, these routines rely on automation and syndication. For instance, Web sites like Ping.fm, OnlyWire and Hellotxt enable users to post the same content across multiple networking sites with a click or two of a mouse. Other sites, like Buffer, SocialOomph and TwitResponse, allow users to write postings months in advance and schedule them for publication at a later date.” The full story.

From the Bureau of Economic and Business Research: “Our psyche will play a big role in whether the economy will remain in its slow-motion recovery or, worse, slump into a true downturn. Central Florida is still struggling to find its footing since the last recession technically ended in June 2009. How much lower can we go? Housing has already been wiped out. Consumer confidence is at historically low levels. And good jobs are harder to come by than a British tourist with a tan. Here in Orlando, the recovery has been propped up by tourism. Local hospitality jobs are leading the state in job growth. “It’s pretty clear a big part of the recovery for Florida has been tourism,” said Christopher McCarty, director of the University of Florida Bureau of Economic and Business Research. McCarty said Orlando is “better positioned” than other areas of the state to weather another downturn because of tourism and impending health care-related jobs. The scariest of the current economic indicators, however, is the dismal level of consumer confidence. McCarty, who measures Floridian’s confidence every month, said the numbers are already in what would historically be considered recession territory. From June to July, confidence ticked up slightly from 67 to 69. He expects the number for August to take another drop, setting the stage, perhaps, for an economic scenario similar to the double-dip experienced when the economy fell into a recession for seven months in 1980 and then again from 1981-82.” The full post.