Still signing. Still great. Here he is with Elvis Costello on Letterman:

And here he is singing his classic:

From the Bradenton Times: “It might take a great deal of explaining to understand why all of the $55 million in PECO (Public Educational Capital Outlay) program funds are going to Florida’s 350 charter schools while not one dollar goes to the 3,000 traditional public schools for construction and repairs. Public school officials throughout the state are fuming, wondering how this happened? But it seems like legislature may be defining a problem for their fix, rather than fixing a defined problem. If the facts show funding went to where it was needed most, so be it, but those school officials who are forced to work under leaky roofs, around struggling air conditioners and in ill-equipped facilities certainly don’t see it that way. The Orlando Sentinel reported Seminole County’s Superintendent, Bill Vogel, as saying “We desperately need the PECO money, it’s essential for maintenance of our buildings.” He takes issue with the poor plumbing, carpets and paint. PECO funds are generated through a gross receipts tax on the sale of utilities then funneled to schools through a very complicated maze into the general fund. The South Sun-Sentinel reported that all of the state cash budgeted for school construction and maintenance is going to the independent, tax-financed charters favored by the Republican-dominated Legislature and Gov. Rick Scott.” The full story.

And Fred Grim in the Miami Herald: “The governor and the Legislature have invested their rhetoric and your money in the notion that charter schools will improve student achievement. Except the results haven’t been so grand. Less than 12 percent of the state’s schools are charters, but they account for 15 of Florida’s 31 failing schools. In Broward, for example, all four of the schools deemed failures were charters. Statewide, charters were more likely to receive a D rating, but less likely to earn A’s, B’s or C’s than traditional schools.”

Katrina vanden Heuvel in the Washington Post: “In states across the country, Republican legislatures are pushing through laws that make it more difficult for Americans to vote. The most popular include new laws requiring voters to bring official identification to the polls. Estimates suggest that more than 1 in 10 Americans lack an eligible form of ID, and thus would be turned away at their polling location. Most are minorities and young people, the most loyal constituencies of the Democratic Party. There are only two explanations for such action: Either Republican governors and state legislators are genuinely trying to protect the public from rampant voter fraud, or they are trying to disenfranchise the Americans most likely to vote against them. The latter would run so egregiously counter to democratic values — to American values — that one hopes the former was the motivation. And yet, a close examination finds that voter fraud, in truth, is essentially nonexistent. A report from the Brennan Center for Justice found the incidence of voter fraud at rates such as 0.0003 percent in Missouri and 0.000009 percent in New York. “Voter impersonation is an illusion,” said Michael Waldman, executive director of the Brennan Center. “It almost never happens, and when it does, it is in numbers far too small to effect the outcome of even a close election.” […] Even in the face of such overwhelming evidence, there are still conservatives who audaciously claim that these restrictive laws are not intended to shrink the electorate. Defenders point to the fact that, in addition to young people and minorities, the elderly, who tend to vote for Republicans, are among the groups likely to lack an ID. True. But rather than exonerate Republicans, this information is even more damning. Take Texas for example: This year Texas passed a voter ID law, but wrote in a provision that explicitly exempts the elderly from complying with the law. The law also considers a concealed handgun license as an acceptable form of ID, but a university ID as insufficient.” The full column.

Paul Krugram doesn’t buy the debt-deal hype: “For the deal itself, given the available information, is a disaster, and not just for President Obama and his party. It will damage an already depressed economy; it will probably make America’s long-run deficit problem worse, not better; and most important, by demonstrating that raw extortion works and carries no political cost, it will take America a long way down the road to banana-republic status. […] we will probably have a depressed economy through 2013 as well, if not beyond. The worst thing you can do in these circumstances is slash government spending, since that will depress the economy even further. Pay no attention to those who invoke the confidence fairy, claiming that tough action on the budget will reassure businesses and consumers, leading them to spend more. It doesn’t work that way, a fact confirmed by many studies of the historical record. […] And then there are the reported terms of the deal, which amount to an abject surrender on the part of the president. […] In fact, Republicans will surely be emboldened by the way Mr. Obama keeps folding in the face of their threats. He surrendered last December, extending all the Bush tax cuts; he surrendered in the spring when they threatened to shut down the government; and he has now surrendered on a grand scale to raw extortion over the debt ceiling. Maybe it’s just me, but I see a pattern here.” The full column. 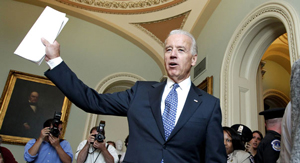 From Politico: “Vice President Joe Biden joined House Democrats in lashing tea party Republicans Monday, accusing them of having “acted like terrorists” in the fight over raising the nation’s debt limit, according to several sources in the room. Biden was agreeing with a line of argument made by Rep. Mike Doyle (D-Pa.) at a two-hour, closed-door Democratic Caucus meeting. “We have negotiated with terrorists,” an angry Doyle said, according to sources in the room. “This small group of terrorists have made it impossible to spend any money.” Biden, driven by his Democratic allies’ misgivings about the debt-limit deal, responded: “They have acted like terrorists.” Biden’s office initially declined to comment about what the vice president said inside the closed-door session, but after POLITICO published the remarks, spokeswoman Kendra Barkoff said: “The word was used by several members of Congress. The vice president does not believe it’s an appropriate term in political discourse.” Biden later denied he used that term in an interview with CBS.” The full story.

Wendy MacNaughton in the Times Book Review: When I sit down to work, I keep a small bowl of garlic croutons on my desk. These are little rewards for good ideas and strong lines, Pavlovian pellets to keep my spirits up. Recently, I began to wonder what fuel writers have relied on, and the answers turned out to be all over the culinary map. Walt Whitman began the day with oysters and meat, while Gustave Flaubert started off with what passed for a light breakfast in his day: eggs, vegetables, cheese or fruit, and a cup of cold chocolate.” The full story, and click on the image below for larger snacks. 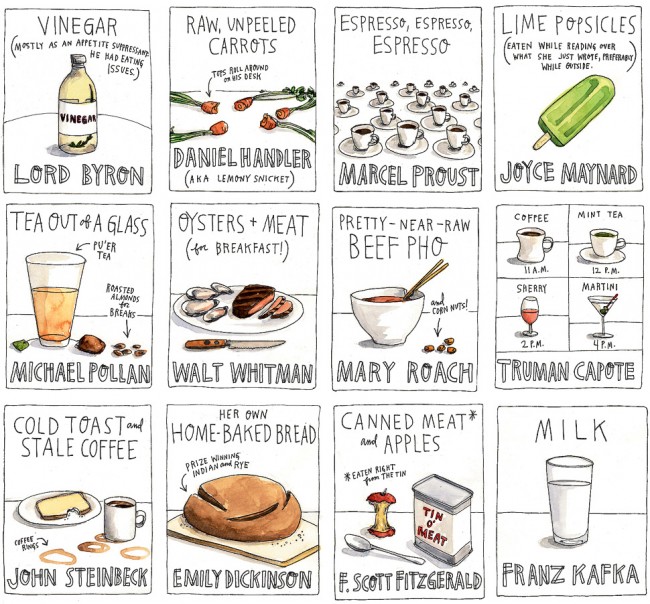 How the Egyptian Pyramids Were Built: A New Theory in 3D

From Archeology: “Of the seven wonders of the ancient world, only the Great Pyramid of Giza remains. An estimated 2 million stone blocks weighing an average of 2.5 tons went into its construction. When completed, the 481-foot-tall pyramid was the world’s tallest structure, a record it held for more than 3,800 years, when England’s Lincoln Cathedral surpassed it by a mere 44 feet. We know who built the Great Pyramid: the pharaoh Khufu, who ruled Egypt about 2547-2524 B.C. And we know who supervised its construction: Khufu’s brother, Hemienu. The pharaoh’s right-hand man, Hemienu was “overseer of all construction projects of the king” and his tomb is one of the largest in a cemetery adjacent to the pyramid. What we don’t know is exactly how it was built, a question that has been debated for millennia. The earliest recorded theory was put forward by the Greek historian Herodotus, who visited Egypt around 450 B.C., when the pyramid was already 2,000 years old. He mentions “machines” used to raise the blocks and this is usually taken to mean cranes. Three hundred years later, Diodorus of Sicily wrote, “The construction was effected by mounds” (ramps). Today we have the “space alien” theory–those primitive Egyptians never could have built such a fabulous structure by themselves; extraterrestrials must have helped them. Modern scholars have favored these two original theories, but deep in their hearts, they know that neither one is correct. A radical new one, however, may provide the solution. If correct, it would demonstrate a level of planning by Egyptian architects and engineers far greater than anything ever imagined before.” The full theory.

Michael Massing in the New York Review of Books: “Since the outbreak of the News Corporation scandal in Britain, journalists on this side of the Atlantic have been intently scrutinizing Rupert Murdoch’s American operations in the hopes of uncovering similar improprieties. Joe Nocera, in a column in the New York Times, complained that the Wall Street Journal has been “Fox-ified” since Murdoch took it over, running articles slanted toward the Republican party line and serving as “a propaganda vehicle for its owner’s conservative views.” David Carr, a Times media reporter, observed that the money the company reportedly paid out to hacking victims in England is “chicken feed” compared with what it has spent responding to lawsuits filed by smaller competitors like Floorgraphics (over allegedly stealing proprietary information) and Insignia Systems (over predatory business tactics). The Washington Post detailed the activities of Michael Regan, the head of News Corporation’s lobbying corps in Washington, which, it noted, is “one of the most muscular teams in town.” Such digging into Murdoch’s American operations is certainly welcome, and if it turns out that his company has broken the law here as in Britain, then journalism prizes will fly. But it seems to me that these stories have overlooked the two properties in Murdoch’s portfolio that deserve the most attention. One is the New York Post. Under Murdoch’s control, the Post has trafficked in the type of malicious, salacious tabloid journalism practiced by the now-defunct News of the World and the still-reeking Sun. The paper has delighted in breaking (and making) politicians, smearing enemies, and ridiculing many ordinary citizens. Its utter amorality was on recent display in its coverage of the Dominique Strauss-Kahn affair, when in a matter of days it abruptly pivoted on its front page from calling him a “perv” to labeling his accuser a “hooker” (for which she is now suing the paper). […] Yet the sins of the Post are mild when compared with those of the real centerpiece of Murdoch’s American holdings, the Fox News Channel. Since being launched in 1996, Fox has had a profound and toxic effect on the press and politics in this country. With a daily prime-time viewership of around 2 million—more than that of CNN and MSNBC combined—it has become the Republican Party’s most powerful booster. […] Unlike the News of the World, there’s no indication (as of now) that Fox has engaged in illegal activity. What it has done is violate every journalistic and ethical standard. It has promoted preposterous conspiracy theories, peddled blatant falsehoods, and given a soapbox to all sorts of cranks and crackpots.” The full piece.

We thought you should know. 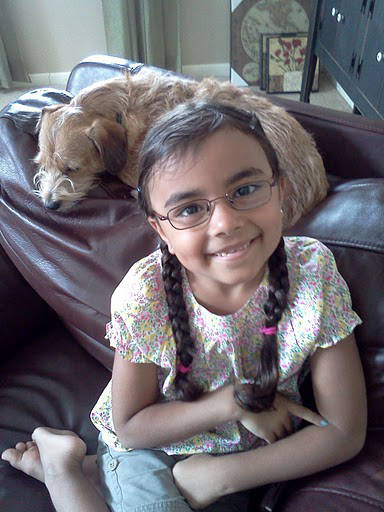