The Times shows graphically who racked up how much debt. Keep in mind of course that the president who, proportionately, racked up the largest debt, compared with his predecessors until then, was Ronald Reagan, who is the alleged father of “small government.” 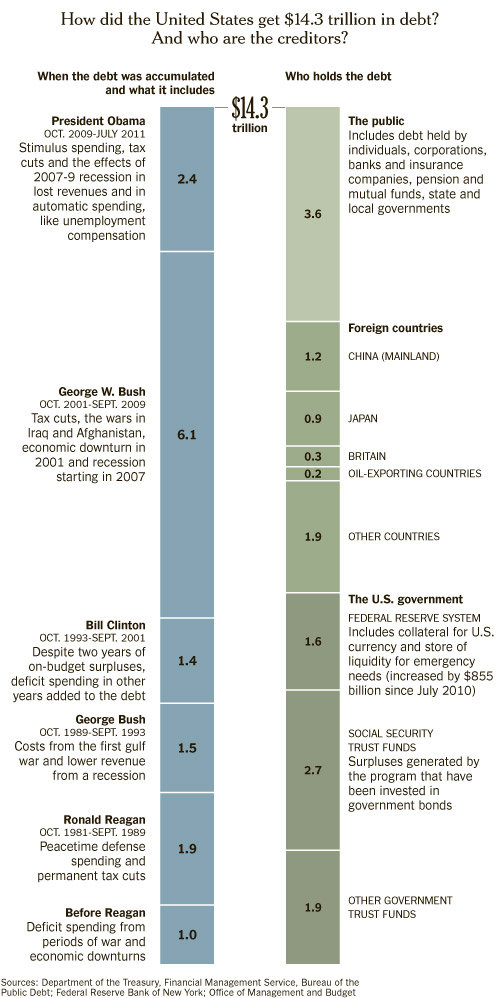 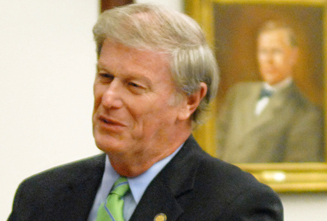 From the Times-Union: “State Sen. John Thrasher and his wife, Jean, have put their Fleming Island home on the market for $1.3 million. The Record reported last month that although Thrasher’s legal residence is a condominium in St. Augustine, he appeared to be making the Clay County home his principal residence. Thrasher’s senatorial district runs along the coast from Nassau to Volusia counties and does not include Clay County. State law is vague on what constitutes residency for legislators, with the principal requirement being the legislator’s intent to make an address his home. Thrasher’s 1,527-square-foot condominium in St. Augustine has a homestead exemption, and he has stated that it is his primary residence. Most of his legal documents list the condo as his residence. As of last month, Thrasher had the Times-Union delivered to his Fleming Island home every day. Some of his legal documents were mailed to that address as was his water bill, which has been as high as $450 a month – all indications that his Fleming Island home is his main residence.”

Jimmy Kimmel isn’t among our favorites, but his latest edition of “Unnecessary Censorship” is worth the double-edged visual puns: 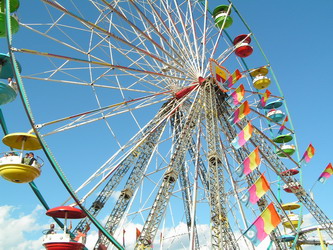 “The fair started with the premise of giving our youth a place to show their 4-H projects,” Fred Springer, a veterinarian with offices in Elkton and St. Augustine who served as the volunteer fair manager for the past five years, told the Record. “The poor economy is to blame (for it closing). (Financing) is entirely based on sponsorship. Last year, we had zero cash sponsorship.” The Record continues: “Every year for the last seven years, the fair made just enough to put on next year’s fair. Springer said that there’s enough money to put on a fair this year, he said. But if that’s spent, there’s nothing for 2012 and he fears that the fair might close for good. […] Mounting the St. Johns County Fair costs between $50,000 and $55,000. […] But last year, the fair had only $35,000 to spend and there was no entertainment, which hurt attendance.” The full story.

From the folks at WTFnoway.com:

Take out your wallets, your handkerchiefs, your indignation:

Why Progressives Need a Big Idea 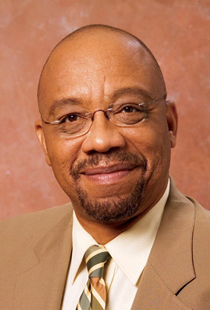 Eugene Robinson in the Washington Post: “It is clear that unless President Obama ends up taking unilateral action to break a hopeless deadlock, Republicans will win. The House, the Senate and the White House are all working within GOP-defined parameters. […] Conservatives are on a winning streak because they have a Big Idea that serves as an animating, motivating, unifying force. It happens to be a very bad idea, but it’s better than nothing — which, sadly, is what progressives have. The simplistic Big Idea that defines today’s Republican Party is that taxes are always too high and government spending is always wasteful. Therefore, both taxes and spending need to be reduced. […] I can think of no greater threat to our nation’s prospects than the GOP’s policy-by-anecdote crusade against government. The United States is falling behind other nations in infrastructure, education and health-care indicators such as infant mortality and life expectancy. […] People may dislike paying taxes, but they dislike unemployment more. Progressives should talk about bringing the nation back to full employment and healthy growth — and how this requires an adequately funded government to play a major role.” The full column.

From Nasa: “Two teams of astronomers have discovered the largest and farthest reservoir of water ever detected in the universe. The water, equivalent to 140 trillion times all the water in the world’s ocean, surrounds a huge, feeding black hole, called a quasar, more than 12 billion light-years away. “The environment around this quasar is very unique in that it’s producing this huge mass of water,” said Matt Bradford, a scientist at NASA’s Jet Propulsion Laboratory in Pasadena, Calif. “It’s another demonstration that water is pervasive throughout the universe, even at the very earliest times.” Bradford leads one of the teams that made the discovery. His team’s research is partially funded by NASA and appears in the Astrophysical Journal Letters. […] Astronomers expected water vapor to be present even in the early, distant universe, but had not detected it this far away before. There’s water vapor in the Milky Way, although the total amount is 4,000 times less than in the quasar, because most of the Milky Way’s water is frozen in ice. Water vapor is an important trace gas that reveals the nature of the quasar. In this particular quasar, the water vapor is distributed around the black hole in a gaseous region spanning hundreds of light-years in size (a light-year is about six trillion miles). Its presence indicates that the quasar is bathing the gas in X-rays and infrared radiation, and that the gas is unusually warm and dense by astronomical standards. Although the gas is at a chilly minus 63 degrees Fahrenheit (minus 53 degrees Celsius) and is 300 trillion times less dense than Earth’s atmosphere, it’s still five times hotter and 10 to 100 times denser than what’s typical in galaxies like the Milky Way. Measurements of the water vapor and of other molecules, such as carbon monoxide, suggest there is enough gas to feed the black hole until it grows to about six times its size. Whether this will happen is not clear, the astronomers say, since some of the gas may end up condensing into stars or might be ejected from the quasar.” The full story.

When Lady Gaga Is Great

When she’s not acting like a degenerate, she can really sing. Watch: 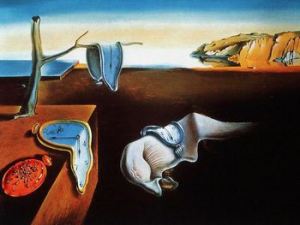 From Scientific American: “Everybody knows that the passage of time is not constant. Moments of terror or elation can stretch a clock tick to what seems like a life time. Yet, we do not know how the brain “constructs” the experience of subjective time. Would it not be important to know so we can find ways to make moments last, or pass by, more quickly? A recent study by van Wassenhove and colleagues is beginning to shed some light on this problem. […] [S]ome investigators have suggested that the amount of energy spent during thinking and experiencing defines the subjective experience of duration. In other words, the more energy it takes to process a stimulus the longer it appears as a subjective experience of time. Something moving toward you has more relevance than the same stimulus moving away from you: You may need to prepare somehow; time seems to move more slowly. The experience of time is not linear. Fear and joy stretch time as do stimuli that move towards us. What can we learn from these studies for our day-to-day experiences? When we experience something as “taking a long time” it is really the result of three inter-twined processes: the actual duration of the event, how we feel about the event, and whether we think the event is approaching us. There is little we can do about the first factor but there are obvious ways of modulating how we feel about an event and how we think about an event approaching us. Future studies will need to address the question of whether modifying these factors can alter our subjective time experience so that that we can shorten life’s painfully extended moments of boredom and extend those wonderful moments of bliss.

A Tribute to Jim Hensen and the Muppets

From Open Culture: “Good luck staying dry-eyed through this moving tribute to Jim Henson, which features a group of puppets trying to cope with the death of their beloved creator. It’s a long time since we’ve seen the so-called stages of grief dramatized so beautifully and with such economy. (The filmmakers recently followed up their 5-minute short with a trailer for what looks like a promising feature-length version.)”

Overtime from ouryatlan on Vimeo.