For a Hurricane Ian overview as of Tuesday, go here.

Courts are ramping down, law enforcement is ramping up in Flagler County in preparation for Hurricane Ian’s impact, now projected to be more serious than projected even as late as Monday evening.

The Flagler County Sheriff’s Office is preparing for hurricane Ian with plans to mobilize over 200 deputies, cancel all leaves, stand up high-water vehicles, and prepare for potential water rescues with water crafts. No decisions have been made regarding curfews, but curfews may be a possibility in the days ahead, Sheriff Rick Staly said.

At the courthouse, much of the docket is being cancelled for the rest of the week. This morning, jurors were due for jury duty, with eight trials on the docket. All the jurors were released and the trials reset.

All first appearances will go on “as normal via zoom,” Circuit Judge Terence Perkins said in court this morning. “If for some reason somebody has a power outage or they can’t get online, then we’ll have to communicate that,” Perkins said. “So far as the judges go, I’ve got the cell numbers for everybody so we can communicate openly about that.” Meanwhile Perkins conducted some of the hearings and motions set for this morning.”We’ve been doing the daily briefings with Jonathan Lord and his county emergency management team,” Sheriff Rick Staly said this morning. “Obviously, those will continue on a more frequent basis probably starting today. In the meantime, what I have directed my team to do is make sure that all our high water vehicles are ready to go. Our chainsaws are ready to go. All of that is operated by our emergency response team. The air boat, which is the easiest boat [to use] for low marshy area or flooded residential areas, quite frankly, was moved to a more centralized location, so that depending on where the need is, we don’t have to go over to the Hammock and get the boat. So those preparations are being done.


“I’m meeting with my staff this morning to determine if we’re going to put our entire team on what’s known as Alpha Bravo shifts, which is 12-hour shifts with days off canceled. That hasn’t been decided yet because we’re waiting for a little better prediction from Flagler County Emergency Management today.” Staly spoke early this morning, based on Monday evening predictions, and foresaw that some plans would change, and preparatory conditions accelerate, based on this morning’s updates.

“Looks like they’re going to open a couple of shelters, so we’re working on our staffing plan for that because we need for schools to make a decision and the courts to make a decision,” Staly continued. “Because normally what happens to staff those shelters, we use our school resource deputies and our deputies assigned to the courthouse. But so far, they have not made decisions on whether or not the court is going to be open and whether schools are going to be open or closed. So we’re having to revise our plan in case they stay open.”Perkins this morning said he, too, was still awaiting a decision–likely by the chief judge of the Seventh Judicial Circuit, which covers Flagler, Volusia, St. Johns and Putnam–on the courthouse’s schedule, even though for all intents and purposes, it’s gradually shutting down.


Staly said deputies are prepared to enact evacuation orders, but he cautions: “Even though they come out as a mandatory evacuation, the reality is, it is a strong recommendation. And so we do not arrest people for not evacuating. But we explained to them that if they don’t evacuate when winds get to a certain level, 45 miles an hour, and then they need help because a tree fell on their home or their trailer or they’re being flooded, we’re not going to be able to respond and neither is the fire department. Basically, they’re on their own at that point. Which is why we encourage people to evacuate if you are in an evacuation zone.” 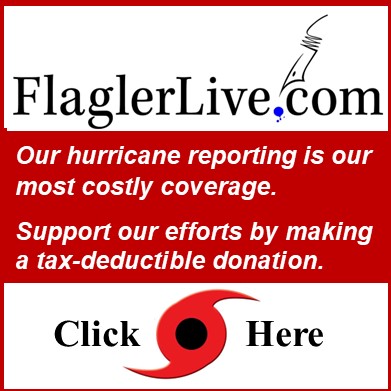 The same principle applies in case a call comes into the 911 center about a crime or a crime-related emergency. The response, Staly said, “is going to depend on the location and is going to depend on the severity of the incident. And we will do everything we can to respond but we’re also not going to risk the life of a deputy sheriff to respond. Especially in any event where somebody was encouraged to evacuate and didn’t, so it’s a pretty broad question here, but it really just depends on a lot of different factors.”

As for curfews, “there’s been no discussion of that. Of course with the storm changing, that could change,” the sheriff said. “So at this point, there are no curfews but this storm is moving slowly. It is rapidly changing our operations so that that could occur. And obviously if we got a serious hit in Flagler, that’s clearly going to occur to protect life and property.”


“I’m sure there will be a lot of trees falling, which is very likely to take the powerlines and block roadways,” Staly said. “That’s why we we have a chainsaw operation with our emergency response team so we can cut our way through to get the people if we need to,” Staly said. “Bottom line for us is that the sheriff’s office is well prepared, equipped and with trained staff to handle whatever Mother Nature throws at us. Obviously it would be nice if this would have happened next year when I have my operation center functional. But our plans right now, assuming that the courthouse is closed, which sounds like it will be, is that the sheriff’s operations for this and our team will operate out of the courthouse, because it has full power backup on a generator.”

All deputies except those assigned to the jail would be involved in the response to the storm emergency. The jail, one of the strongest and obviously most secure buildings in the county, will continue operating, and all corrections deputies will remain in their usual assignments. There are no plans to release any inmates due to the emergency.