Recycling as you knew it is over in Flagler Beach. Or, as the city’s sanitation supervisor put it, “recycle has become pretty much, another day of trash pick-up.”

Starting today, Flagler Beach is no longer recycling glass, plastic, metals, paper, magazines or newspapers. The only things its sanitation crews will pick up for recycling is aluminum and certain forms of corrugated cardboard such as Amazon or shipping boxes, but not pizza boxes or shoe boxes.

“Plastic is not being recycled like it used to be, it’s just a fact of life,” Rob Smith, Flagler Beach’s supervisor of sanitation, told the city commission in December, cautioning commissioners that change was necessary. Dumping a ton of plastic costs $80 to $90, and it must be driven to Jacksonville, as opposed to the $15 a ton for less expensive recyclables. So the only way we can get through this and do the right thing is to recycle things that actually can be recycled. If not, we’re wasting our time because I’m picking up trash three days a week.”

Flagler Beach, whose own city crews–as in Bunnell–provide trash service, becomes the latest among hundreds of cities and counties across the country to abandon traditional recycling in whole or in part since 2018.

That January, China, America’s largest market for recyclables, stopped accepting the nation’s trash in its ongoing efforts to combat pollution. That raised the price of recycling, making it financially difficult for haulers to keep recycling and preserve their contracts with local governments absent big cost increases to customers. Customers don’t want those increases, even though they continue to want recycling programs. Meanwhile, from Philadelphia to Memphis to Florida, thousands of tons of recyclable materials are ending up either ion landfills or in incinerators

Flagler Beach’s decision coincides with Palm Coast’s current rethinking of its trash contract as it prepares to bid it out before 2022. Recycling is a big part of that rethinking. The city surveyed residents in March about what they want to see in their next contract. Based on a preliminary glance at responses from thousands of residents, they still very much want recycling as they’ve known it.


Waste Pro, Palm Coast’s trash hauler, continues to provide recycling (officially, anyway), and residents continue to put out their recycling bins at curbside every Wednesday (often filled with stuff that shouldn’t be there: pizza boxes, plastic food containers, grocery bags, diapers, styrofoam cups.) Residents have been dubious about the hauler’s claims that it was still recycling, seeing regular trash trucks pick up their recyclables time after time. The city investigated.

“We got them to verify or validate,” Palm Coast City Manager Matt Morton said, citing the city staffer who verified it, “that they’re still recycling. We went down a year ago when these concerns were asked of us, like, hey, is Waste Pro recycling. And we went to their MRF,” the materials recovery facilities, “And yeah, they’re, there. They’re separating, and they were bailing and bundling and hauling off bundles of material and recycle.”

Flagler Beach Commissioner Eric Cooley had the same question for Smith in December, having heard the stories, even when the city were to move to restricted recycling.

“Let’s say we get it right, we ship it to ELS, and it’s all recycled [materials], that’s perfect,” Commissioner Eric Cooley wondered, referring to Environmental Land Services, the Bunnell company where recycling materials end up. “Are they going to recycle it?”

“So are we going to tell the citizens we’re only doing cardboard?,” the commissioner asked. Yes, along with aluminum cans and metals, Smith told him (though metals were eventually eliminated from the bargain.)


Cooley was still skeptical–not about the effort, but about the public’s receptivity. A long-time volunteer in beach cleanups and other green initiatives, Cooley recalled how Flagler Beach has made every effort to encourage people to recycle, planting the proper bins, adding the proper language on what may and may not go in there, color-coding the bins, and still: “They all end up with one thing in them: trash.”

Smith wanted the city to come up with an educational plan for the city’s 2,600 households and about 200 businesses or commercial accounts.
He wanted to cut costs because as it was, he was duping a lot of recycled materials in the dump. “Continuing down the path we’re headed now makes no sense. I mean I might as well get rid of recycle together because it’s another trash day,” Smith said. “That’s where we’re at and I want to recycle, I want to do the right thing, I want to have a city, be part of a city that in six months, there’s an article written about the residents of the city that are doing the right thing, and we’re actually making a difference.”

Commissioner Jane Mealy offered to put the volunteers of the Flagler Woman’s Club to help with the recycling reeducation of residents. Smith suggested slipping in brochures in utility bills or running radio spots. “I want everybody to join in and do the right thing and make a difference, because it’s not going the right direction right now,” Smith said.

Cooley was all for an education campaign. But even then, he was skeptical. “There’s going to need to be a hard line where it gets left,” he said of non-compliant material that ends up bulking up trash bins. “And that’s going to be a lot. I’m just worried with human behavior, because we’ve been studying this for decades now. Is compliance going to be enough to pay for everything we’re doing? We have special trucks on runs, we have special runs going here and there, and when this is all said and done, are we going to get back financially as a city, what it’s costing us in effort, or are we still upside down?”

Smith said compliance on the beach as unlikely. But residents and businesses ” that’s really easy to make them comply,” he said. The trash and recycling trucks are still running anyway, he said, to pick up the stuff, whether it’s called recycling or trash.


“We can’t say we’re not going to do recycle at all,” Mealy said, alluding to what she understood as a legislative mandate requiring some form of recycling, though no such mandate is actually in place. Mealy was referring to the Energy, Climate Change and Economic Security Act of 2008, which had, in fact, set out a goal for cities and county to meet: recycling 75 percent of all trash by 2020, with interim goals of 40 percent by 20212, 50 percent by 2014 and 60 percent by 2018. “Florida achieved the interim goals established for 2012 and 2014,” the state Department of Environmental Protection reports. “However, Florida did not meet the 2016 interim goal of 60% and the recycling rate has continued to decline since that time. Florida’s 2018 recycling rate was 49%, falling short of the 2018 interim recycling goal of 70%.” Oddly, the department attributed the drop not to China’s closed door and the surge in cities and counties no longer recycling, which unquestionably is playing a role in the decline, but to a drop in construction and demolition debris recycling.

But Smith’s message at the December meeting seemed clear to the commission: “What Rob is asking is, he’s spoken to some of the businesses and some of the residents, let them come up with the plan. Come back and present it to us, and then work on this educating the masses,” then-Mayor Linda Provencher said, summing up the proposal.

“I’m just telling you where we either need to head,” Smith said, “we need to head here or we need to head to here, and I don’t want to go over here to the dark side and just store everything in a trash truck, because I think that’s irresponsible, when there is things that we can recycle.”

He added: “You got to start small, start easy and then work your way up and education is key. You can’t say I want this this this and this, or we’re not picking your stuff up, it has to be a group effort.” Smith proposed returning to the commission by January at a meeting or a workshop with a plan. He did so at the January 28 meeting, when the commission also approved a 1.79 percent increase in trash-hauling fees, though Smith by then had reorganized routes to eliminate the need for a new driver. The increase, the city finance director said, is due to the increased volume that will go in regular bins, possibly requiring an increase in pick-ups or containers. The tipping fees for dumping the waste are also rising.

The new recycling directive was issued Monday by email, just two days before the recycling pick-up, with this change: “As of Wednesday, April 7, 2021, Wednesday is the city wide recycle day. The city will only be recycling corrugated cardboard, boxes and aluminum products.”

As other cities watch what Flagler Beach is doing, the approach in Palm Coast is unlikely to change from what it is now, with residents assuming that what they put in their recycling bins actually gets recycled (diapers and non-recyclables aside). “My suspicion is, you know, recycling is sort of integral, important to Palm Coast,” Morton, the Palm Coast city manager, said. “The identity is the green, the clean green city, right? I mean, I think it’s important. So I suspect we’ll continue to recycle.” 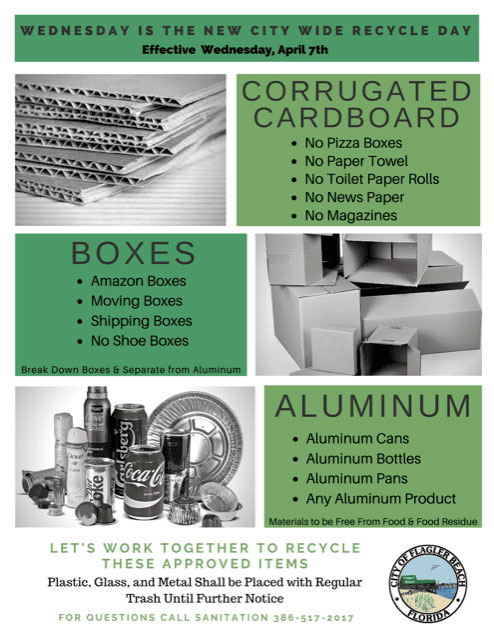