Palm Coast can finally be known as the home to some very, very serious and joyous book lovers.

Two weeks ago The New York Times’ Opinion department asked readers “What book — new or old, fiction or nonfiction — has influenced how you think, act or look at the world,” and to do so in no more than 200 words. On Sunday, the paper ran 14 responses that made the cut over a full page in its Sunday Review section–just 14 out of more than 1,300 submissions. Among those 14, and in third position no less, was none other than that of Rick de Yampert, FlaglerLive’s culture writer, resident oracle of pop, sitar troubadour and Palm Coast resident.

Others went for standards like Heller’s “Catch-22” and Camus’ “Stranger,” Aurelius’s “Meditations” and Betty Friedan’s “Feminine Mystique,” the inevitable Dr. Seuss and the required “Color Purple,” or the occasional literary atrocity like “Atlas Shrugged,” as the contributor of that item herself realized: “Who wants to live in a world where the weak are thrust aside and forgotten?” Barbara Lipkin of Naperville, Ill., wrote. “Her words allowed me to crystallize my own thinking. I grew up.”

De Yampert chose one of the more unexpected titles to make the cut: “Go, Dog. Go!,” by P.D. Eastman. In his characteristic Kerouacian joy for words, de Yampert describes the 1961 children’s book as an “epic” that “has it all: Drama — where are those dogs going? Humor — dogs on scooters, flying helicopters and driving cars! Existential angst — why doesn’t he like her hat? It’s multicultural — blue dogs and red dogs and green dogs! It’s a love story — why yes, he does end up liking her hat!”

It was de Yampert’s first book in prekindergarten, and from there “it was only a short skip” to William Butler Yeats, Camus, Robert Anton Wilson “and the 10,000 mostly nonfiction books in my home library on Irish history, African-American history, my Pagan spiritual path, world religions and metaphysical matters, the Middle East, quantum physics, the Beatles and rock music, yadda yadda yadda.”

Palm Coast doesn’t often appear in the Times: in the vows section the occasional parent of the bride or groom is said to be living in retirement there, the town makes appearances in an obituary here and there (in December 1993, Rabbi Maurice Davis, “an authority on religious cults in the United States,” died at his home in Palm Coast), the wildfires of 1985 scored a mention for Palm Coast, so did of course ITT’s conjuring of Palm Coast out of expanses of scrub, as with a long 1974 article about the development’s environmental controversies and ITT’s goal” an investment of $1 billion and 600,000 residents by 2000,” the Times’s Jon Nordheimer reported.

The most recent mention of Palm Coast in a Times article was for dreadful reasons: the case of the Buddy Taylor Middle School teacher forcefully removing a student from a classroom and shoving him into a hallway, and the reaction the story, originally published on FlaglerLive, triggered (drawing a substantial amount of support for the teacher, but also condemnation.) 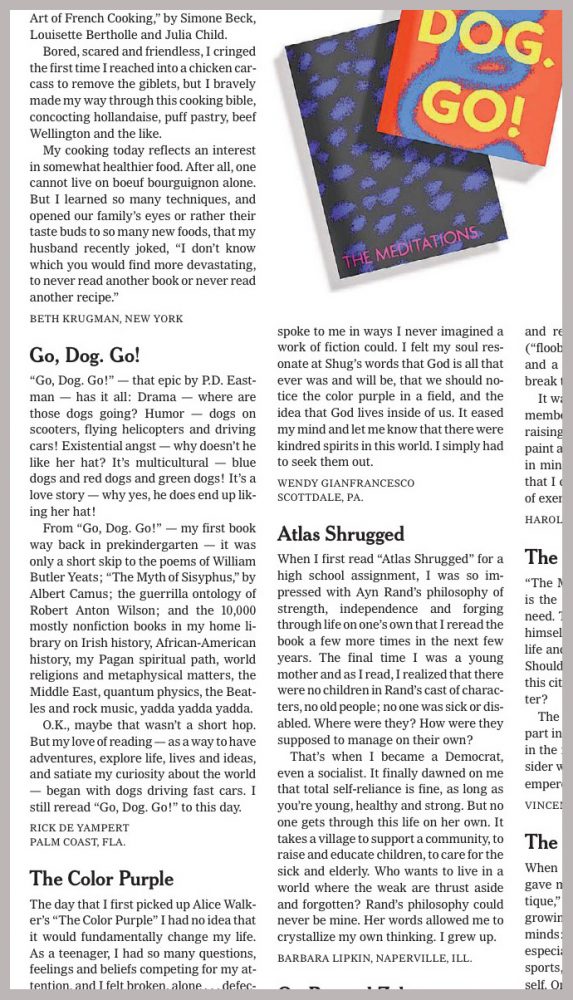 The Times’s 200-word quota was not enough for us, so we asked him a few more questions about his books and his brush with The Times.

What are the titles on your nightstand right now? It’s more a matter of books I have strategically placed throughout my home so that they will pester me and say, “Hey, remember that you promised to read me soon!” One is “Earth God Risen: An Inner History of the Horned and Horny Ones,” by British occultist-esotericist Alan Richardson. It’s actually a curious reworking – not a revision – of his 1992 book “Earth God Rising: The Return of the Male Mysteries.” The earlier work was monumental for me as I was finding my way onto my Pagan spiritual path. Richardson explores ancient myths of the horned god, which figure prominently in the modern Pagan revival, while also giving his insights on how those myths come alive today – such as the time he had a vision of Cernunnos, the antlered God of the ancient Celts, at a Rolling Stones concert. For the new work, Richardson reprints much of the original edition but also drops in lengthy new commentary, in boldface and at his whim, throughout the text. The result is that his current, older self is pondering and critiquing the thought of his younger self. It’s a fascinating approach. I so wish Albert Camus had done the same with the essays in his “The Myth of Sisyphus”-–another book that’s always nearby for re-reading.

Another always-near book, a gift from my late wife Cheryl, is actually like a daily devotional for me: “Kindling the Celtic Spirit: Ancient Traditions to Illumine Your Life Throughout the Seasons” by Mara Freeman. Other currently nearby books: Many by mystic East-meets-West philosopher Alan Watts but especially his “mountain journal” titled “Cloud-Hidden, Whereabouts Unknown,” the collected poems of Yeats (always at hand), a hilarious doomsday book titled “Criswell’s Forbidden Predictions” by a joke psychic who I am certain some people take seriously, and the memoir “Life on the Rocks: One Woman’s Adventures in Petroglyph Preservation” by Katherine Wells, who lived 10 miles from where I grew up in Los Alamos, New Mexico.

Why these titles? I find that the majority of my reading these days somehow touches on spirituality. That’s true even of my fetish for the Beatles (I think I own every major work on the group). Another of my nightstand books I could have listed above is Steve Turmer’s “The Gospel According to the Beatles,” which examines their lives, music, history and pop-culture influence through a spiritual lens, and not just that of Christianity.

What took you to respond to The Times’ query? Like most book junkies, I love talking books. I came across the Times’ solicitation online and, to paraphrase Yeats, my wits went on a fantastic ride, my horse’s flanks spurred by childish memories, and my appreciation of “Go, Dog. Go!” wrote itself in about five minutes.

What other titles were in contention for the one book that changed your life? Savvy readers of my short essay about “Go, Dog. Go!” will realize I pulled off a common parlor trick for any of those scenarios in which one is asked to pick their one favorite of whatever category is under consideration. That is, I was able to sneak in multiple answers under the guise of picking just one life-altering book. So yes, the poems of Yeats, Camus’s “The Plague” as well as his essay “The Wind at Djemila,” and Robert Anton Wilson’s fiendishly clever romp through the “occulture” and metaphysical counterculture of the 1960s titled “Cosmic Trigger I: Final Secret of the Illuminati” all changed my life.

And I am pissed that I failed to mentioned Kurt Vonnegut in my Times piece. I will confess here that while I adore “Slaughter-house Five,” I am more fond of his novel “Breakfast of Champions,” and I absolutely love his essay collection, “Fates Worse Than Death.” During my 30-year career as an arts and entertainment writer at various daily newspapers in the South, I was able to review “Fates.” Uncle Kurt, as I lovingly dubbed him in my review, was kind enough to reply to me in writing when I sent him that article via his publisher. (By the way, Robert Anton Wilson and poet Sonia Sanchez also were kind to reply to me when I sent them articles I had written about their work.)

Does reading literature still have a serious place in our culture? As should be apparent in my replies above, I am somewhat of a freak: the bulk of my reading is nonfiction – essays and book-length studies on subjects that interest me: metaphysical matters, alternative spirituality, world religions, Irish history, African-American history, the Middle East and especially the insights of Palestinian public intellectual Edward Said, the Beatles, critical discussions of the works of both fiction and nonfiction writers, etc. So, to address your question: If by literature you mean novel-length fiction, and especially “serious” fiction . . . hmmmm. I am reminded of Vonnegut talking about his sister in one of his essays: She was the sort of woman, he wrote, who might roller skate through art museums at a goodly pace and all the while say “Got it! Got it! Got it!”

I imagine I am sort of that way concerning lengthy fiction: My reading list, indeed almost my entire library, is designed to stimulate my thinking by engaging how others perceive the world, whether the subject at hand is rock music, Indian raga, the Yoruba religion, the weirdness of quantum physics, the amazing modernist paintings of Jack Yeats, tarot cards, or crows and ravens. (By the way, I am under contract to write my own book on those birds, tentatively titled “Crows and Ravens: Birds of Myth and Magic.”)

I think I am like Vonnegut’s sister: Why take a long, time-consuming trip through a novel by Philip Roth, Nabokov or Toni Morrison when I can digest an Alan Watts or Albert Camus essay in 20 minutes and then spend hours pondering the meaning of life? I got into daily journalism because I wanted to interview creative people–writers, artists, musicians, etc.–about how and why they do what they do. Consequently, for whatever freakish reason, I would rather read an interview or critical study of Philip Roth than read one of his novels–although I must get to “Operation Shylock: A Confession” one day soon.

However, whenever I have to take a lengthy road trip by car, I go to the county library and stock up on two types of audiobooks on CD: “Star Trek” tales or the mysteries of Tony Hillerman, which are set in the Navajo lands of northern New Mexico near where I grew up. You can take my Tony Hillerman audio mysteries from me when you can pry them from my cold dead fingers.