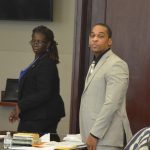 It was the third trial on the same charge for ex-Palm Coast resident James Taylor, 41, after a mistrial and a remand for a new trial on appeal. He faces an almost certain sentence of life in prison because of his past as a felon and sex offender.

Victor Williams, 42, of Palm Coast, is accused of drugging and raping a 16-year-old boy. His defense’s strategy is to portray the boy as promiscuous and not credible, in hopes of lessening the charges against Williams, who faces life in prison if convicted.

Defense attorneys for James A. Taylor, the man on trial for allegedly molesting his ex’s 11-year-old daughter in Palm Coast, effectively plundered his accuser’s and her sisters’ credibility in four hours of testimony today.

Jaquez Roland, who’d served 10 years in prison for armed burglary, will serve at least another 30 as he was found guilty Thursday of three charges, including armed robbery and false imprisonment, stemming from the Sharps Liquor robbery in Palm Coast in October 2011, one of three robberies implicating Roland. His victim cried with relief as the verdict was read.