As much as we talk about protecting the First Amendment in this country, with each generation apparently we get further away from understanding it.

Don’t we teach the Constitution in civics classes anymore?

A just-released Pew Research Center survey concludes that with each subsequent generation comes a greater willingness to let government tell us what we can and cannot say — in essence, surrender the precious freedom of speech our forefathers guaranteed in the Constitution.

Compare that to the Silent Generation (ages 70-87): only 12 percent of the oldest generation think the government should shut them up; a whopping 80 percent of them said, like it or not, we get to say what we think. 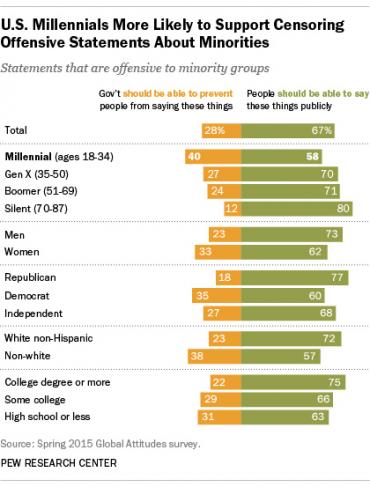 Surprisingly, perhaps, the Pew Research Center finds nearly twice as many Democrats say the government should be able to stop speech against minorities (35 percent) compared with Republicans (18 percent). Independents, as is often the case, find themselves in the middle. One-third of all women say the government should be able to curtail speech offensive to minorities, as opposed to 23 percent of men who say the same.

I find all these numbers appalling.

The fact that 40 percent of millennials think government censorship of free speech — even if it might be interpreted by some as bigoted and offensive —  is a good thing … that is a problem. Forty percent. Think about it: You either live in a free country or you don’t. And a government that can sanction or punish you for giving your opinion is not the government of a free country and it certainly isn’t the government of the one our forefathers founded.

The number of people too ignorant to understand this is growing rapidly, as the graph suggests. When the Millennials have kids of voting age — something that will begin to happen in less than 20 years — we could have a generation the majority of which will support government-imposed penalties on politically incorrect speech. Which the government will then get to define. And that majority will pick a president who will pick the Supreme Court that defines the limits of free speech.

You can guess the rest.

The Pew survey — for sure, under the radar and hardly front-page fare — is nevertheless a sobering wakeup call.  The results seem to me an indictment of both our culture and our educational system, taken over by people hostile to our values as a country.

We can’t remain faithful to the First Amendment by turning our backs when it’s put to its severest test — the right to freedom of speech for those whose views we despise the most.

My fellow conservatives aren’t crazy about the American Civil Liberties Union, I know. But I maintain they’re wrong. I remember one of the most noted moments in ACLU history. It occurred in 1978 when the organization defended a Nazi group that wanted to march through the Chicago suburb of Skokie, Illinois, where many Holocaust survivors lived. The ACLU persuaded a federal court to strike down three ordinances that placed significant restrictions on the Nazis’ First Amendment right to march and express their views. The decision to take the case was a demonstration of the ACLU’s commitment to the principle that constitutional rights must apply to even the most unpopular groups if they’re going to be preserved for everyone. Many now consider this one of the ACLU’s finest hours.

The principles of the First Amendment — including freedom of speech — are indivisible. Extend them on behalf of one group and they protect all groups. Deny them to one group, and all groups suffer.

Nancy Smith is the editor of Sunshine State News. She started her career at the Daily Mirror and The Observer in London before spending 28 years at The Stuart News/Port St. Lucie News as managing editor and associate editor. She was president of the Florida Society of Newspaper Editors in the mid-1990s. Reach her by email here, or follow her on twitter at @NancyLBSmith.