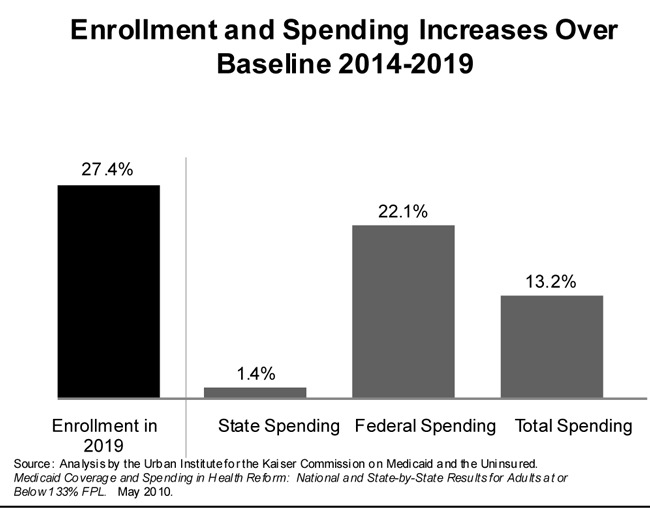 As Republican leaders offer dire warnings about states’ cost burden under federal health reform, a new report says moving nearly 1 million Floridians into the Medicaid system would dramatically reduce the number of uninsured people in the state — with Washington picking up most of the tab.

The report, released on May 26 by the Kaiser Family Foundation’s Commission on Medicaid and the Uninsured, estimates Florida will gain 951,622 additional Medicaid enrollees by 2019 because of federal health reform and that the number could go as high as 1.37 million if the state and other agencies aggressively try to sign up people.

It says the lower enrollment estimate would cost the state $1.2 billion by 2019, with the federal government paying about $20 billion. The report is relatively upbeat about the funding of the program, a marked contrast to the arguments of Florida Republicans, who say expanded Medicaid requirements will eat an ever-growing hole in the state budget.

“There will be large increases in coverage and federal funding in exchange for a small increase in state spending,” the report says.

In a lawsuit challenging the health-reform law, Republican Attorney General Bill McCollum pointed to increased costs as one of his arguments that the the federal government is infringing on the sovereignty of states. In the lawsuit, McCollum said state officials think Medicaid expansion will lead to costs “in the billions of dollars” for Florida by 2019.

“The federal government’s contribution under the act, though providing more aid for newly eligible persons, will not fully compensate Florida for the dramatic increase to its Medicaid rolls, increased reimbursement rates for primary-care practitioners, and other substantial costs that it must bear under the act,” the lawsuit says.

The Kaiser Family Foundation, which is not affiliated with the insurer Kaiser Permanente, is an independent operating foundation based in California that tracks health issues across the country (Disclosure: It is one of Health News Florida’s advertisers and provides a national headline service to Health News Florida without charge).

The new report is designed to give a state-by-state look at the effects of new Medicaid requirements in the federal health law.

Those requirements center on making Medicaid available, beginning in 2014, to adults who have incomes at or below 133 percent of the federal poverty level, currently an income of $14,404 for one person. The 133-percent threshold is higher than income cutoffs used by many states; also, the law would open Medicaid to many childless adults for the first time.

States, however, likely will face other added costs beginning in 2014 from residents who qualify for Medicaid but have never signed up. This group will cost the state more per enrollee because they fall under the current funding match.

In both scenarios in the Kaiser report, Florida would have the third-largest gain in Medicaid recipients in the country, trailing California and Texas.

Under the more-conservative scenario of Medicaid enrollment growing by 951,622 people, the report indicates that the number of uninsured Floridians below 133 percent of the federal poverty level would drop by 44.4 percent.

Under the scenario of 1.37 million additional Medicaid enrollees in Florida, the report projects a near-70-percent drop in uninsured adults below 133 percent of the poverty level. That scenario, however, also would have far higher costs for the state — a total of $2.5 billion by 2019.

The report does not account for savings that could occur because of a reduction in the amount of uncompensated care that stems from Florida’s high rate of uninsured people.

Currently, Florida uses varying income thresholds for determining whether people qualify for Medicaid, depending on factors such as ages of children and whether women are pregnant. But the cutoff for a large eligibility group is 100 percent of the federal poverty level, significantly below the future 133 percent threshold.

Health News Florida Capital Bureau Chief Jim Saunders can be reached at 850-228-0963 or by e-mail at [email protected].