“Obviously the values are falling in reaction to what the market is, this horrible real estate market we’re in, a market of short sales and foreclosures and people losing their jobs. That’s all that’s affecting us,” Gardner said.

Flagler County had never experienced a drop in taxable values in any year between 1973 and 2007. This year’s loss is the worst in the county’s history. It will have far-reaching consequences for every local government and every property owner. Local governments will spend the next few weeks setting next year’s budget. They must set their tax rate according to the amount of services they intend to provide—and the tax revenue they expect to take in.

“The only thing that can happen when the values fall is two choices,” Gardner said. “Cut services or raise the millage rate.” 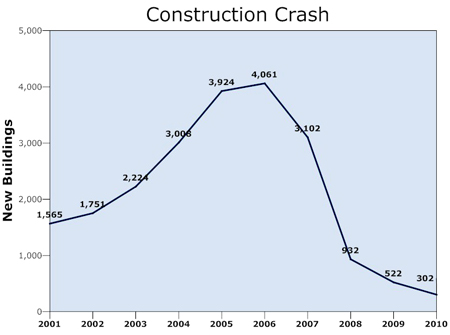 The millage rate is the property tax rate. The county and Palm Coast raised property taxes slightly last year. Only slightly, because they’ve been using up their reserves fast. Those reserves are dwindling, forcing elected officials to make the sort of choices they don’t want to make. And economic activity is still nowhere near the productive levels it recorded earlier last decade or in more normal times before the housing bubble, especially in construction. In the taxable year that ended in 2010, just 302 buildings were raised in Flagler County, by far the lowest level in more than a decade. Construction peaked at 4,061 units in 2006 and has been plummeting since.

Lower property values doesn’t necessarily mean lower tax bills. When property values fall, local governments offset the loss in revenue by setting their tax rates either at the level that would command the same revenue they took in the previous year, or higher. Either way, the result is higher tax bills for property owners.

Overall, however, property values are merely returning to more realistic levels after experiencing irrational increases beginning in 2007. Between 2000 and 2007, when values peaked in Flagler, taxable values increased from $2.7 billion to $11.1 billion—a 311 percent increase. Government revenue grew apace. The increases were not sustainable. But as they lasted, they encouraged home builders, real estate agents and speculators to build more, buy more, trade more and add to the housing inventory in hopes of cashing in (or flipping, as the discredited term went) a few more times.

When the housing bubble burst, Flagler County and Palm Coast were left with an inflated inventory of properties, and a slew of property owners who could not afford what they bought. This year’s foreclosure rate is higher than last year, thus accelerating values’ downward spiral.

“You expect an ambulance to your house when you need it. We all do,” Gardner said. “So our choices as citizens, if you think money should be spent in a different way you should come to a budget hearing. But when you go in there make sure you’ve looked at the budget and you understand what the heck their options are. They can’t just cut, they can’t just leave the millage rate. They have to pay our bills. I hear people say, no matter what they can’t raise the millage rate. Why?”