A fire broke out at 2:25 this afternoon in the 3400 block of North Ocean Shore Boulevard in Beverly Beach, consuming parts of a beach-front house, and the totality of its palmetto-brush backyard, as well as parts of a neighboring backyard to the north, demolishing a segment of a beach-access set of stairs. The fire burned about an acre.

The fire then jumped State Road A1A and began burning palmetto brush along the road. Several fire engines were on scene by then, and were able to control, then put out, both blazes. But in the case of the brushfire on thbe west side of A1A, the success was temporary.

The wind was creating treacherous conditions, shrouding that portion of A1A in thick, gray smoke. The road is closed in both directions.

The fire, Flagler County Fire Chief Don Petito said at the scene, is believed to have started in the thick brush north of the house at 3431. It then made its way quickly into ands around the house as embers flew in the brisk wind, triggering additional fires.

Flagler County Fire Flight was called in with its water bucket. The helicopter kept hovering, minute after minute, in case something broke out as it had earlier.

“We were concentrating on this side of the road,” Petito said, “I’d just turned around and told somebody to make sure it doesn’t jump us, and as soon as I said that there was flames on the other side.”

That fire was tackled and put down after consuming perhaps a quarter of an acre, and Fire Flight kept hovering, but just as the scene appeared to be calming down, flames soared high again in the palmetto, and Fire Flight was called in. The helicopter began dumping bucket after bucket on the fire.

As of 4 p.m., Fire Flight was still furiously battling flames that appeared to be getting nearer a tile-roofed house on the west side of A1A. Just then, Petito returned from that very house, where he stood with its owner on the porch, watching as Fire Flight controlled the flames. “We’re good on the house right now,” Petito said, assured that the house would be safe. “We’ve got hose lines all around it.”

But Fire Flight was continuing to assault the flames with water to keep them from jumping a canal and moving on to Island Estates, nearby.

Adding to the firefighters’ strategy, at 4 p.m. the Florida Division of Forestry arrived on scene and was unloading bulldozers that were preparing to dig a wide trench around the expanse of palmetto spotting with flames. Fire Flight was dumping as much water on the area to enable the bulldozers to go to work.

“Once they’re able to do that, we’ll go in there and finish putting it out,” Petito said. It is the same strategy used on most local wildfires, but it is the first time in the last three years of wildfires that this area of the beach-side has experienced a danger of that magnitude, requiring the intervention of so many agencies and the Division of Forestry.

Every local fire department is at the scene–Flagler Beach, Palm Coast and Flagler County Fire Flight, which has a couple of its ambulances on scene–not for injuries, but because paramedics are also firefighters. The Flagler County Sheriff’s Office is also on scene, as are fire police units.

Division of Forestry bulldozers set to work at 4:15, with Fire Flight still dumping water within a few feet of their operations. Meanwhile, firefighters continued to hose the brush around the two houses that had originally been struck by flames, with one spot minutes earlier appearing to smoke again.

Once the bulldozer went deep inside the brush, which is about 7 to 10 feet high, Fire Flight halted water-dumping, then began hovering over or circle the area, to ensure that the bulldozer doesn’t run into a spot of fire it cannot see–in case a fire were to spot again. The helicopter was getting close to refueling time, too.

By close to 5 p.m., Fire Flight was gone, and all flames appeared to have been put out: there was not a wisp of smoke in sight. The bulldozer was still at work, but firefighters had begun making their way into the brush on the west side of A1A for mop-up operations. Capt. Ron Bolser of Flagler County Fire Rescue said he was expecting to have crews there most of the night.

The Division of Forestry’s agriculture investigator arrived on scene later and interviewed residents and others, to determine a cause of the fire. “They were looking at that lot to the north of the blue house. I haven’t heard anything yet,” Petito said, not going so far as calling the fire suspicions just yet. But, he added, “anytime there’s a vegetation fire, it doesn’t just start. It’s either lightning or somebody threw something in it.”

There was no lightning.

Workers had been working on the house at 3431 North Ocean Shore until they’d broken for lunch.

Greg Johnston, who’s owned the brick house at 3423 North Ocean Shore for 20 years, was in his yard, hosing down charred remains of his front lawn as well as the burned palmetto in the neighboring yard. Johnston was glad of the outcome, considering himself lucky to have come out of it with only some molten eaves and a cracked window, from the heat. That house, to the north of Johnston’s, had been under renovation. Its beach side is now severely damaged.

What remained of the feverish scene at 5 p.m. was the line-up of fire engines and vehicles, their red lights still flashing, and the hum of engines pumping water–and, on occasion, the sound of more emergency calls through the radio, elsewhere in the county. By then, too, a different kind of helicopter showed up at the scene–a TV news helicopter–signifying, of course, that the operation was essentially over.

Correction: earlier versions of this story referred to the burning brush as cypress, showing to what extent we flunk our arboreal education. Our thanks to the reader who set our palmettos straight. 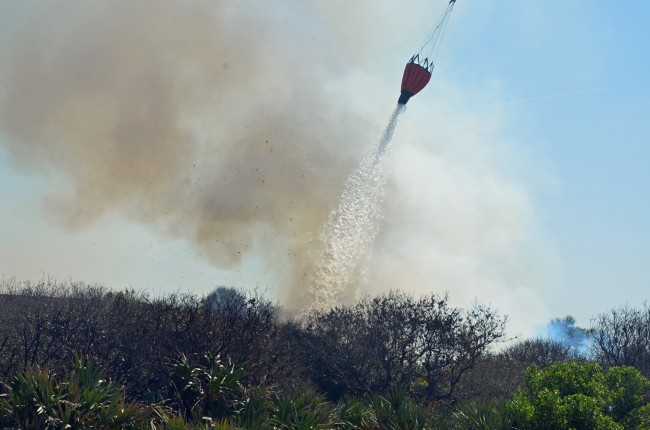