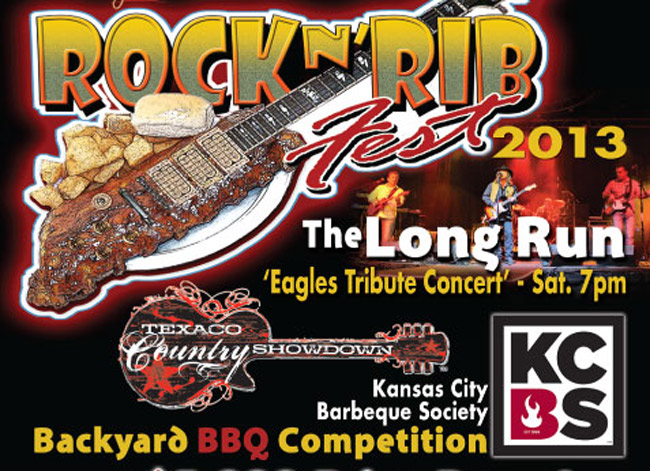 The entertainment lineup for Palm Coast’s Rock N’ Rib Festival on Friday and Saturday, April 12 and 13, is a little bit country and a little bit rock-n-roll.

In addition to the headlining Eagles tribute band “The Long Run” Saturday evening, this year’s Rock N’ Rib will host seven acts in Round 1 of the $100,000 Texaco Country Showdown Friday evening and Saturday. Also performing Saturday evening will be singer-songwriter Johnny Bulford, co-writer of the No. 1 country hit “A Woman Like You,” and 2009 grand-prize winner of the Country Showdown, a national competition.

The Long Run, based in Fort Lauderdale, features five musicians who realistically reproduce the sound that makes the Eagles one of the most successful bands in rock and roll history. The Eagles tribute band will take the Rock N’ Rib stage at 9 p.m. Saturday.

Rock N’ Rib will take place from 5 to 9 p.m. Friday, April 12, and from noon to 9 p.m. Saturday, April 13, at Palm Coast’s Central Park in Town Center. Admission is $3 per day (down from $20 per person per day last year). Children 12 and under get in free. Lawn chairs are OK, but please, no coolers and no pets: the city would like you to drink up, but by buying your booze through its own stand. The carnival portion of the event will continue Sunday, April 14, from noon to 3 p.m.

In addition to live music, the festival will include plenty of barbeque, a Backyard BBQ Contest, car show, carnival, hourly Wildlife Tree Animal Discovery programs with animals from every continent on earth, and a fireworks finale on Saturday night. Rock N’ Rib is presented by Palm Coast, Beach 92.7 and Kix Country 98.7.

The entertainment schedule is as followes: