Because of the quirky lag time in Florida’s reporting of unemployment figures at the beginning of a new year–when January and February figures are released within a fortnight the second half of March–the state’s labor department seized on the opportunity to say that Florida’s unemployment rate was lower than the nation’s for the first time since January 2008. In January 2013, the national unemployment rate was 7.9 percent, though it fell to 7.7 percent in February. Florida’s February numbers will be released on March 29. 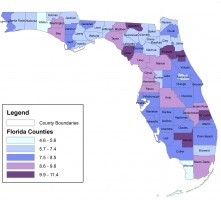 The state’s labor department has followed Gov. Rick Scott’s lead in its news releases, fully taking credit for the recovery, though the trend in Florida has been similar to that in the rest of the nation, where the economy continues to improve despite political setbacks and a government-spending austerity, as well as recession in Europe (hurting American exports) that, together, have dampened the economy’s fuller potential. In percentages, Florida’s unemployment rate has fallen more steeply than most other states’ between 2010 and 2012, but that’s largely because Florida’s unemployment rate had been among the highest in the nation.

If anything, Florida’s job creation (as opposed to its unemployment rate) has lagged other that in other states. In January for example, employment increased in 34 states and the District of Columbia and decreased in 16 states, but the largest over-the-month increase occurred in Michigan (+26,500), followed by Washington (+24,100) and Massachusetts (+16,100). Florida did not rank in the top-10 job-creating states for the month. For the year, Florida added 127,500 new jobs. The state added 15,400 jobs in January, essentially erasing a 15,300 job loss the previous month. But the state’s unemployment rate still ranks it 33rd out of 50.

In Flagler County, the unemployment rate had fallen in December even as 76 fewer people held jobs. The reason: the labor force had shrunk by 239. In January, there again was a drop of people holding jobs–of 154 people–to just 31,034 people with jobs, out of a labor force of 34,880, which declined by 66 from the previous month. Over the year, the labor force has grown by 515. In January, 3,846 people in Flagler were drawing unemployment. That’s not the full reflection of the county’s unemployment rate, which does not include people who have quit looking for work, or people working part-time because their hours were cut back, or because they cannot find full-time work.

Over the month, no single job sector in Florida experienced either a significant job gain or job loss, with every sector recording activity below 1 percent–and most of them recording activity below 0.5 percent. Administrative and waste services recorded the highest net job gain, with 3,300, or 0.6 percent. Health care and social assistance added 2,800 jobs, a 0.3 percent increase. In the loss column, transportation, warehousing and utilities lost 1,700 jobs, or 0.7 percent, and accommodation and food services lost 1,400 jobs, or 0.2 percent. Federal government jobs declined by 700 in the state, a 0.5 percent cut, but grew by 700 state and 700 local government jobs.

Here are some numbers relevant to the Flagler-Volusia labor market, released by the Daytona Beach-based Center for Business Excellence: