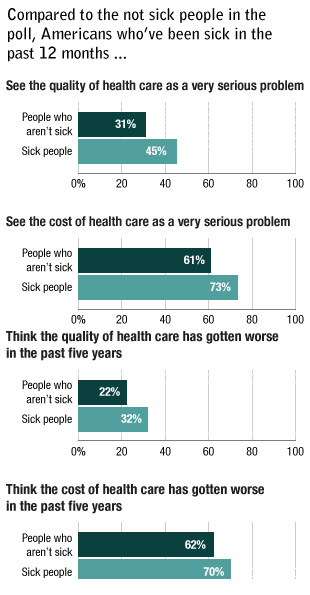 In the lull between the Supreme Court arguments over the federal health overhaul law and the decision expected in June, we thought we’d ask Americans who actually use the health system quite a bit how they view the quality of care and its cost.

Most surveys don’t break it down this way.

When the results came back, we found that people who have a serious medical condition or who’ve been in the hospital in the past year tended to have more concerns about costs and quality than people who aren’t sick. No big surprise there.

Nearly half of those with recent serious illness say they felt burdened by what they had to pay out of their own pocket for care.

The recently ill are more likely to say the cost and quality of care have worsened over the past five years, compared to people who weren’t sick.

Among people who’ve recently required a lot of care, significant proportions say their treatment was poorly managed, with nearly a third complaining of poor communication among their caregivers. One in eight believe they got the wrong diagnosis, treatment or test.

Those findings led us to investigate the problems people are having, both in our poll and in a series of stories on the radio and the Web we’re calling “Sick in America.”

The poll, a joint venture of NPR, the Robert Wood Johnson Foundation and the Harvard School of Public Health, is one of very few focusing on people who’ve actually been seriously ill, injured or hospitalized in the past year.

“This poll listens to the voices of the sick,” says Robert Blendon of Harvard. “That provides a good barometer of what’s happening in health care in America.”

The poll randomly surveyed 1,508 adults across the nation. A little more than a quarter of them had a serious illness, injury or disability requiring “a lot of medical care,” or overnight hospitalization within the past 12 months.

If you want to dive deeper, here’s a summary of the poll findings, plus the topline data and charts.