For two days last week, a trio of the Flagler Youth Orchestra traveled to half the county’s schools for the orchestra’s annual pilgrimage ahead of its open house. The trio, featuring two orchestra students (on cello and violin) and led on viola by Caren Umbarger, the orchestra’s music director, performed in front of some 500 students at six schools, not counting the recorded gig for Indian Trails Middle School’s 900 students: the trio videotaped a presentation that was broadcast there during the students’ morning news.

It was all in preparation for Wednesday’s 5 p.m. open house at the Indian Trails Middle School cafeteria, where prospective new orchestra students—from 3rd grade and up—are invited to watch a much larger orchestra ensemble perform, watch a performance by the orchestra’s faculty of four, and decide whether to join what has been Flagler County’s broadest, and by some measures most successful, arts program of the last six years. An enrollment of around 300 is expected at the beginning of the year.

“The response from the students on the tour was remarkable,” Umbarger said of the tour. “Having had little exposure to classical music, the student s responded with amazing enthusiasm. I wouldn’t be surprised if we had lots of new enrollment from the students who saw the presentation.”

The orchestra is launching its seventh season as a free after-school program for students at all skill levels looking to play a string instrument—violin, viola, cello or double bass. Parents are responsible only for the cost of the instruments themselves, although the Friends of the Youth Orchestra’s fund-raising arm enables substantial scholarships that provide instruments to those who cannot afford them. The idea is that no student looking to play an instrument should be discouraged by financial or other circumstances.

The program is made possible thanks to the Flagler County school district, which subsidizes 80 percent of its $65,000 annual cost. The program’s boosters do the rest. The program was established during former school superintendent Bill Delbrugge’s tenure (a former band director himself, he was a big supporter of the arts) and carried on through Janet Valentine’s tenure, with, so far, unfailing support from the school board.

Demand for scholarship instruments has been high, and supplies limited. This year, because of many families’ hardships in Flagler County, demand may be higher still. There’s been occasions when parents have taken advantage of the scholarships without necessarily being on the needy list (qualification for free lunch–not merely reduced–is one criteria). The orchestra is encouraging parents to request scholarships only when absolutely necessary in order to let those who need them most be served.

The orchestra is also encouraging donations—of instruments or money. Donors can sponsor an instrument scholarship for as little as $149–the lowest cost for an instrument. 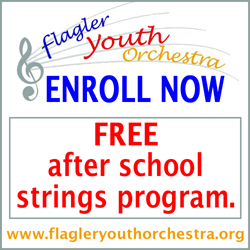 A few weeks ago, an alumni of the youth orchestra and Matanzas High School, Brett Copeland, who’s now studying music in Arizona, donated three instruments he no longer uses: a violin, a viola and a cello, and Cara Cronk, an Indians Trails teacher and parent of another orchestra alumni, donated a cello. The donations, particularly of cellos, are a big boost for the orchestra’s scholarship bank, but many more are needed.

“I’m sure you can find aspiring young musicians who will put them to good use,” Copeland wrote the program director when he made his donation. “Supporting the arts if vital, especially with the ongoing economic crisis.”

The youth orchestra’s classes are held at Indian Trails Middle School every Monday and Wednesday, in one-hour class increments, from 3 to 6 p.m. “This is a wonderful opportunity for students to learn responsibility for the care of their instrument, their role in the learning process and the joy of getting together and making beautiful music with others,” Umbarger said.

Students, depending on their skill and grade level, are assigned to one of four teachers for the one-hour classes twice a week. Students will learn about the enriching world of classical music and many other genres—including the occasional rock and jazz arrangement—while receiving string instruction in a player-friendly environment. All members, including beginners, will participate in performance opportunities organized throughout the year, including three major public concerts at the Flagler Auditorium.