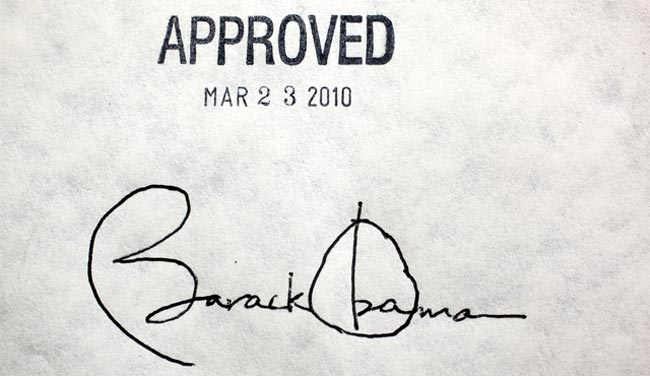 Imagine that you need to raise $10,000 for a worthy cause and you’re throwing a fundraising dinner, with the food and wine donated. You have only 100 seats, so you need to charge $100 per person.

But at the last minute, you find out that 20 of the seats are going to people who can’t or won’t pay. That means you have only 80 who will. What does that do to the ticket price?

That, in essence, is the health-care situation in Florida, where one in five of those who come to the “table” – the emergency room – have no insurance coverage.

Let’s suppose more and more people want free tickets. Finally you say: “Nuts to this! Everybody must pay.”

What does that do to the prices? Right, they sink to where they should have been all along — $100.

The same phenomenon could happen with health care under the new federal laws. Get 32 million uninsured people covered, including more than 3 million in Florida, and the businesses and workers who are already paying for coverage should gain some financial relief.

The relief should be even more profound in Florida than in most states.

• The rate of uninsured businesses and workers in Florida is among the highest in the country. In the United States, one in six is uninsured; in Florida, according to State Health Facts, it’s one in five.

• Medical costs in Florida tend to be above the national average, so any relief on covering costs for the uninsured – the “cost-shift” – is magnified.

• Florida is a relatively low-wage state. This means that when subsidies begin in 2014 to help families of modest means buy coverage through insurance marketplaces, a large percentage of families in the state is likely to qualify.

But what about the cost to state government? One feature of the new health law expands Medicaid – a program that covers the poorest of the poor – to add many groups that have been excluded in the past. Individuals with incomes under $14,400 would be eligible beginning in 2014.

Florida’s Medicaid analysts said that could add up to a budget hit as great as $1.6 billion a year by 2020, counting both medical and administrative costs. No wonder lawmakers are worried; they have to balance the budget.

But a patient advocacy group reported this week that a fairer cost estimate for 2020 and thereafter is only one-third that much.

Health economists say the state’s analysis exaggerated the burden based on iffy assumptions.

For example, it makes no allowance for the likelihood that the economy will have recovered by the end of the decade, enabling some who now qualify for Medicaid to move back into private-sector coverage.

It also assumes that some of those now covered by private employers will lose that coverage and get dumped into Medicaid. That assumption could be right, but maybe not; it’s just a guess.

Those in Tallahassee who are chewing fingernails over this can take heart from a couple of offsets for the expense of Medicaid expansion:

• Florida’s status as a donor state on taxes, sending far more to Washington than it gets back, should be helped by the subsidies for buying coverage. Applied on a sliding scale depending on income, those subsidies can help uninsured families with incomes of up to $88,000.

• Like other employers, the state will get a break from the spiraling cost of covering public employees when uninsured Floridians gain coverage and there’s no longer a cost-shift.

• As much as $850 million a year that local governments around the state are now collecting in sales and property taxes to help care for the uninsured should be freed up for other purposes as the new coverage programs kick in.

So, while there are still many unknowns about how the new federal health-care laws will be implemented, Florida stands to do very well.