We must have missed it by 20, 25 minutes — a car bomb at a busy intersection that left the usual crater rimmed by the usual scattering of body parts. Forty dead or so, as I remember it. A pretty good score for a car bomb, which usually netted 10 or 12 deaths on average. So this one, plus the close call, got our attention for a day or two. Then it was back to driving around as if nothing drastic had happened.

It was the only way. We couldn’t live sanely otherwise. And comparatively speaking, nothing really bad had happened. The odd car bomb was better than daily shellings and sniping all over the place. That was Lebanon in 1977. The civil war, which had started in 1975, was actually on sabbatical that year, giving people the illusion of peace while the gunslingers reloaded and dug deeper trenches. We thought car bombs were just aftershocks, not warm- ups for more.

But more came, from every side. Lebanon is not even four times the size of Volusia County but it became a multiplex of wars, with each little sector featuring one butchery or another. We had the Syrian army, the Christian militias, the Palestinians and their Muslim allies, trigger-happy Israelis and many lesser fanatics still honing grudges. They all looked alike, and they all killed alike in the name of the same God, mostly because some spelled His name slightly differently than others or claimed that their holy book was the older deed to the Holy Land.

It was good to leave. I was 14 when I moved to New York City in 1979. Walking the city streets every day, I took years to get over the fear that any car, any thing, anywhere could blow up at any moment. I got over any lingering attachments for the old country, too. Lebanon wasn’t worth it, plain and simple. Not compared with what I had here. I hadn’t merely left Lebanon. I had escaped it and its lawless mentality. I remember climbing up the World Trade Center for the first time that summer of ’79 and thinking: This is a very good place to be. A much better place.

I had exactly the same feeling six weeks ago when I climbed up the South Tower for the last time so I could show my 7-year-old daughter what it was like. We sat on the tiny metal steps against the windows of the indoor observation deck, our heads against the glass between those steel pillars we now know to have been precisely set 3 feet 4 inches apart, the tower’s sheer cliff of steel below and New York Harbor beyond. She was excited by the Statue of Liberty, which she was seeing for the first time.

I was excited for more arrogant reasons — by the power of the city, which radiates in every direction like its avenues and bridges, that power that had been my first real harbor, seemingly invulnerable and alien to the barbarism I’d come from.

And then Tuesday. The attacks. The collapse of the two towers. My arrogance, and not only mine, humbled. I heard myself checking in with my parents in New York, with my brother who’d flown out of Washington that very morning, repeating those same questions I’d heard in Lebanon after a bomb would go off. “Are you all right?” “Anybody we know that’s hurt?” “Are you traveling again?” Those questions weren’t supposed to be part of the script here. Nor were explosions that made Beirut’s car bombs seem like firecrackers in comparison.

Revulsion over the losses in New York and Washington aside, the attack triggered a succession of fears: That the barbarism I so gladly left behind 23 years ago is here. That those liberties that light up every immigrant’s entry into this country are about to dim, however slightly. (The same liberties light up every American’s life, but those born here are accustomed to the light.) And that it would be open season on Arabs. Incidentally, or maybe not so incidentally anymore, I am an Arab, whatever that means to the average American. Since an Arab is being blamed for Monday’s attacks (and I have only a few remaining doubts that Osama bin Laden joysticked the coup), open season is a surer bet than an economic recovery in the next six months: Americans preach diversity, but they can practice xenophobia with the best of them. It was Mark Twain, after all, who, when confronted with Arabs during his trip to the Holy Land, could only compare their languid demeanor to “that vile, uncomplaining impoliteness which is so truly Indian, and which makes a white man so nervous and uncomfortable and savage that he wants to exterminate the whole tribe.” Now that’s American efficiency: two lines, two races, two kills.

Imagine that sort of innocence unleashed abroad for the last century. Other nations haven’t had to imagine it, of course. They’ve been living it, as have various races at various times here at home. Arabs — or should that be “Muslims”? — are only the latest candidates. In this case, xenophobia and etymology are tied together.

The word terrorism as it is used in the United States is a racist word, almost synonymous with Arab, itself synonymous, though quite wrongly, with Palestinian (when the news is about Israel) or Muslim (when the judgments pan over the entire Middle East). There are millions of Arab Jews and millions of Arab Copts. There are a few million Arabs, mostly Lebanese, who pretend not to be Arabs. And the majority of America’s 2.5 million Arabs, most of them Lebanese and Egyptians, are Christians. I, for example, am an Arab Roman Catholic, not to mention a Yankees fan.

The finger-pointing at bin Laden has the effect of slightly upgrading America’s awareness of certain distinctions from insulting to merely ignorant. It is also forcing the factoid brigade at CNN to look at an atlas to prepare for Bush II’s light show over Kabul. Afghanistan is neither an Arab country nor a Middle East country, nor is bin Laden himself an Afghani. He is a rich Saudi exile, hiding out in the craggy hills of Afghanistan with his satellite television and his millions (in dollars, not in followers), and running a school of terrorism for all takers — Bosnians, Iraqis, Palestinians, Algerians, Tamil rebels, and whoever else cares to ante up shards of hate.

Look a bit closer and you discover that the biggest concentrations of the world’s Muslims isn’t anywhere near the Middle East. They are in Pakistan, in India and in those southern formerly Soviet republics whose guttural names Twain would have punned into prejudice, and a snorkel away from Australia in Indonesia, home to 200 million Muslims. Look closer still and you discover that Islam is as varied as Christianity, as noble in its historic achievements as it has been murderous in its con quests. True, nothing tops Christianity in the breadth and consistency of its genocidal crusades, its inquisitions and holocausts. But nobody’s counting because nobody is interested in looking back too far.

In that case, look around. Terrorism — as Oklahoma City and Columbine so cruelly proved, and as America’s gun-ridden streets prove every day at lower ebb — is not an Arab specialty. Nor is fundamental- ism a Muslim creation. Some Southern Baptists speak the language of ayatollahs. A few are winning elections. Tuesday’s body count aside, American civilization as we know it (as we immigrants crave it) is under attack more from within than it is from without.

All of which should make the job of lynching Arabs quite a bit more complicated than looking for the nearest olive skin, although I fear it won’t. Not many voices are rattling olive branches on talk radio’s combustible tribunals. Guests on a talk show on KSFO-AM in San Francisco a few years ago wondered if Americans should be paid a bounty for shooting illegal immigrants. I’m sure many Americans would gladly shoot Arabs for free.

I have been fortunate enough to be called a sand nigger or a towel head many fewer times than being called worse for being a liberal, which I take to mean that my assimilation into the American melting pot, searing and badly salted though it may be at times, has been relatively successful. But I embraced liberalism as a college student because — to return to synonyms — it is the language of pluralism and tolerance, better known these days as “diversity.” More than English, it is a language without which the United States cannot survive.

Beginning with the Sedition Act of 1798 the country has been through waves of repression that make a mockery of pluralism and tolerance, from the Red Scare to the drug war. It is impossible to predict how severe the reaction to Tuesday’s attacks will be. History suggests that it will be severe, and that it will once again test the nation’s principles. History also suggests that the country generally comes out of these waves stronger than it went in. I’m hopeful. But like most immigrants — and unlike most Americans — I take nothing for granted. Not anymore, anyway.

While waiting with my daughter in an endless ticket line to go up to the observation deck of the Twin Towers a few weeks ago, we listened to the voices around us — Italian and Spanish, some German, some Far Eastern languages, some Arabic, but not much English.

The variety of faces and the dearth of white ones reminded me of that December day in 1986 in Federal District Court in Brooklyn when I was part of a similar group — a couple of hundred of us — bunched up in a courtroom, reciting, in accented English this time, the oath of citizenship.

Since then, visiting the World Trade Center has been as much pilgrimage as pleasure, a reaffirmation of what it’s meant to belong here. There is a relief in becoming American that never abandons you afterward. Like a faith of sorts. It’s strange to feel — to have felt — from 1,400 feet up such an immense sense of security. That much I had taken for granted. 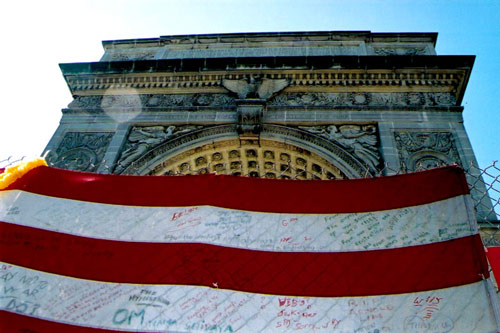